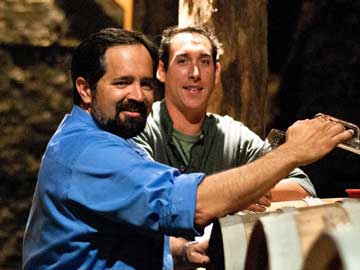 Pope Valley Winery, the historic and family-owned, 120-year-old winery in Pope Valley, CA, looks to take its wine program to new heights by bringing Bryan Avila on as Winemaker.

After serving Pope Valley Winery as Consulting Winemaker since 2014, Avila officially joins the Pope Valley team full time to take on a larger, hands-on role in the winemaking process.

“Pope Valley Winery is as rich in story, character and authenticity as it gets,” said Avila. “From a winemaking standpoint, they produce rare and exciting varieties from the Napa Valley, providing me with an outlet for my artistic talents as a winemaker. The Eakles are the only millennials that I know, that are actually selling wine to millennials.”

As an international consulting winemaker, Avila’s portfolio has grown over the last 15 years to include 1,200 fermentation lots from more than 25 different grape varietals across nearly every California appellation.

Prior to starting his consulting company Winecraft, with which he’s advised vintners, governments and universities all over the world, Avila served as winemaker and tenured faculty for Napa Valley College’s wine program. He’s also served as a wine judge for several wine competitions, including Sunset Magazine and the San Francisco Chronicle.

Pope Valley Winery co-owner David Eakle will continue to oversee wine production as the Director of Winemaking, but as a result of handing over the reigns to Avila, will have more time to focus on vineyard development and his company Eakle Construction & Trucking.

“After working alongside Bryan for the last few years, I’m excited to have him join the team in a full time capacity,” said Eakle. “He has showcased his unique ability to make high-quality wines that also tell a story, and I am confident that future Pope Valley Winery vintages will stay true to our winery’s history, while at the same time, continuing to move it forward in quality.”

By having Avila at the winery on a daily basis, Pope Valley Winery also plans to offer and host new, custom wine tasting experiences, like corporate team building events.

“As the winemaker for Pope Valley Winery, I will be providing hands on leadership on a day-to-day basis to the cellar and sales teams. My focus on these wines is to make them in a way that best accentuates the characteristics of the grape produced in a 120 year-old winery,”

In keeping with the theme, the Pope Valley Winery brand is also undergoing a refresh. For the first time in more than a decade, the winery plans to introduce new labels this Spring. Featuring part of the original weights and measures seal from founder Ed Haus in the 1800s, the labels will pay homage to the winery’s rich Napa Valley history.

Pope Valley Winery was founded in 1897 by Ed Haus as Burgundy Winery & Olive Oil Factory. A century later in 1997, the Eakle family purchased the historic winery and gave it a new life as Pope Valley Winery. In 2009 the next generation of Eakles, siblings Diana and David, stepped in to continue building and furthering the family's vision for Pope Valley Winery as a fine winemaking establishment. The winery produces nearly 5,000 cases of handcrafted, fine wines a year from estate vineyards and vines that were planted as far back as 1940. For moreinformation on Pope Valley Winery wines, tastings and custom experiences, visit popevalleywinery.com, email tastingroom@popevalleywinery.com or call 707-965-1246.