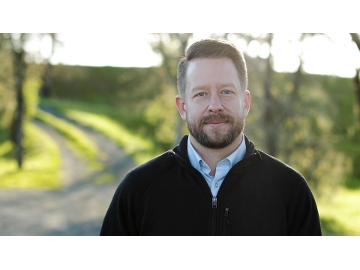 New York, NY – Beringer Vineyards, the oldest continuously operating winery in California since 1876, is thrilled to announce the appointment of Ryan Rech (pronounced Rich) as Chief Winemaker. A member of Beringer’s winemaking team since 2016, Rech is now responsible for shepherding one of Napa Valley’s best known and most beloved wineries into a new era.

“It is an honor to lead a winery with as much heritage and acclaim as Beringer,” says Rech. “Being able to follow in the footsteps of so many revered winemakers and work with extraordinary vineyard sites to create world-class wines is a thrilling opportunity to build on Beringer’s already-extensive history. I look forward to telling the story of the vintage and our vineyards through the expressive yet elegant wines for which Beringer is known.”

More than a decade ago, Rech was drawn to Treasury Wine Estates for the company’s dedication to consistent, high quality wines and the preservation of many Napa Valley legacy wineries. After working on the relaunch of Alexander Valley’s Souverain wines and alongside winemaker Margo Van Staaveren at Sonoma Valley’s Chateau St. Jean, Rech joined Beringer Vineyards in 2016 as Luxury Red Winemaker. In 2017, he was appointed as Senior Winemaker and General Manager. Now, as Beringer’s Chief Winemaker and General Manager, Rech continues the winemaking legacies of Ed Sbragia, Myron Nightingale, Laurie Hook, and Mark Beringer.

Since its founding in 1876 by German immigrants and brothers Jacob and Frederick Beringer, the winery represents a uniquely American story defined by entrepreneurship and bold decision-making that ultimately shaped the global perspective of Napa Valley today. Rech, alongside Assistant Winemaker Jane Valentin, will uphold this legacy as they usher in the next chapter for Beringer’s wines.  Watch this video for more details from Rech on the winery’s pioneering legacy, as well as the iconic Private Reserve and Knights Valley wines.

Beringer Vineyards is the oldest continuously operating winery in California and has been Napa Valley’s benchmark wine producer since its establishment in 1876. Fueled by an entrepreneurial and pioneering spirit, the winery’s foresight in recognizing the quality and potential of grape growing in the Napa Valley and Sonoma’s Knights Valley is showcased today in a portfolio of acclaimed wines from an unparalleled collection of sustainably-farmed vineyards. The first winery to give public tours starting in 1934 and among the first to feature food and wine education in Napa Valley, the historic estate in St. Helena offers a tradition of hospitality that defines the region. For more information, visit https://www.beringer.com or follow @Beringervyds on Instagram and @BeringerVineyards on Facebook.