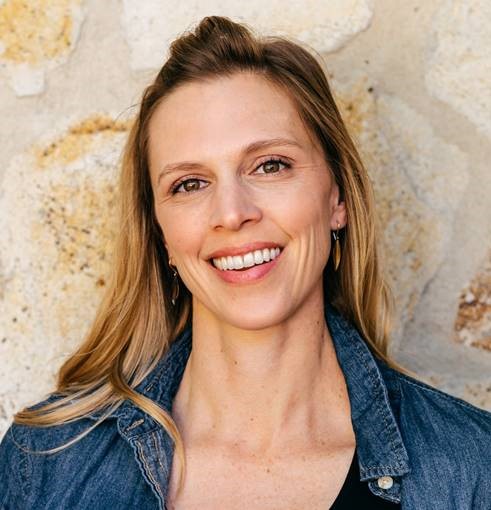 NAPA VALLEY, MOUNT VEEDER, Calif. – July 20, 2021 – Brandlin Estate is excited to announce that it has appointed acclaimed winemaker Rebecca “Becky” George to the position of associate winemaker. George brings more than 15 years of winemaking experience gained on three continents and at some of the finest wineries in the world to her role as the associate winemaker for Brandlin Estate. Named the 2019 “Emerging Winemaker of the Year,” and hailed as “one of the most talented winemakers of her generation” by Antonio Galloni of Vinous.com, George will work alongside Brandlin Estate’s acclaimed VP of winemaking, Steve Rogstad, to craft the winery’s small portfolio of estate-grown wines from Brandlin’s 95-year-old vineyard on Mt. Veeder.

George earned her B.S. in viticulture & enology from UC Davis, during which time she spent a year abroad at the University of Adelaide in Australia, where she began to develop a global winemaking perspective. This perspective deepened when Becky was awarded a prized fellowship from the Confre´rie des Chevaliers du Tastevin to spend six months working at Burgundy’s famed Domaine Me´o-Camuzet. In the years that followed, Becky continued honing her craft at such highly respected wineries as Schramsberg Vineyards and Marcassin, before joining the team at Calistoga’s Kelly Fleming Wines. Over the next decade—the last eight as winemaker—Becky earned acclaim making estate-grown Napa Valley Cabernet Sauvignon and Sauvignon Blanc working alongside noted Consulting Winemaker Francoise Peschon and Vineyard Manager Mike Wolf.

“Becky is a remarkably talented winemaker with a gift for capturing the essence of the vineyards she works with,” says Daniel Zepponi, the president and CEO of Two Estates Wine Collective, which owns Brandlin Estate and Cuvaison in Napa Valley. “As our vineyard approaches a century in age, her knowledge, international experience and passion for crafting wines that honor their vineyard roots will be invaluable as we look to write the next chapter in the story of our historic estate.”

When the Brandlin family emigrated to Napa Valley from Switzerland in 1870, their alpine heritage led them to pioneer a homestead high on Mount Veeder, and in 1926, Henry Brandlin planted the first vines at Brandlin Estate. In 1998, his son, Chester, entrusted the legacy of the 170-acre property to Two Estates Wine Collective and its owners, the Schmidheiny family. In the years since, Brandlin Estate has earned renown as the source for some of Mount Veeder’s most acclaimed mountain-grown wines.

“There is so much history in our vineyard,” says George. “This site has endured for almost a century because it produces wines that are as unique as they are extraordinary. Crafting wines that embody the essence of this place, this mountain, is both a privilege and a pleasure.”