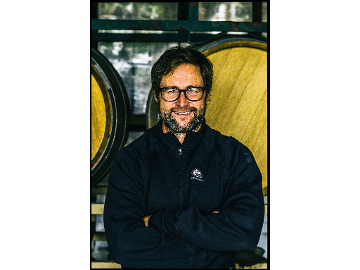 Of his appointment, Storm says, “I love working with Grimm’s Bluff for two reasons, it is a vineyard with immense potential to make world-class wines and the Grimm’s are such great people to work with.” Storm joins a dynamic team that includes Philippe Coderey, a 25th generation vine grower, winemaker, and farmer who has spent his entire life farming and tending vineyards and orchards in his native Provence as well as on Corsica, in Switzerland, Pennsylvania, and California. Coderey was extensively involved with the prestigious M. Chapoutier Domaine, where he supervised the Demeter certification of the Banyuls and Collioures appellations, as well as overseeing the biodynamic farming of 130 acres of vineyards in the Hermitage, Crozes Hermitage, Cornas, St Joseph, Condrieu and Châteauneuf-du-Pape appellations.

Grimm’s Bluff owners, Rick and Aurora Grimm, purchased 246 acres on Kentucky Road in the Santa Ynez Valley in 2010. Their appreciation of European wines and food inspired them to plant 16.6 acres to Bordeaux variety grapes, including Cabernet Sauvignon, Petit Verdot, Cabernet Franc, and Sauvignon Blanc, as well as 5 acres of Italian varietal olives. Grimm’s Bluff was conceived of utilizing the Old World “Quinta” model, and is nearly self-sustaining, with farm animals (including cattle, chickens and guinea hens) adding biodiversity to the estate.

“In short order, Ernst and his family became a part of our family,” says Rick Grimm. “His talents and sensitivities as a winemaker and artist are accented by his decency as a person. He respects the land and his fellow human beings, and has proved to be an adept translator of our unique terroir.”

Grimm’s Bluff Vineyard sits 300 feet above the Santa Ynez River at an altitude of 850 feet above sea level, the estate is located at the South East corner of the Happy Canyon AVA.  The estate is Demeter certified.  Biodynamic & organic methodology has been practiced from inception. No herbicides, pesticides or artificial fertilizers have been used in this vineyard.