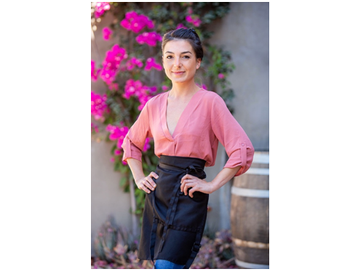 Santa Maria, Calif.— Presqu’ile, the estate winery poised high in the hills of Santa Maria with stunning ocean and vineyard views, announces the addition of Julie Simon as their new executive chef beginning October 1, 2019. Simon will be creating the tasting room wine and food pairings, as well as developing special event menus and overseeing wine dinners, including those with guest chefs.

Julie recently headlined at one of the winery’s sell-out Guest Chef Dinners which brought her to the attention of the Murphys and invited her to come aboard. In her new position, she plans to rework the wine and food pairings to reflect both her style and to complement the library of wines at Presqu’ile. She is also designing an organic garden on the property.

Tim Wanner, Director of Hospitality and Sales for the winery welcomes Simon to the Presqu’ile family, stating, “We are very excited to have Julie join the team. Her commitment to local sourcing, organic farming, and clean, ingredient-focused cooking truly aligns with Presqu'ile's philosophy, and will make for a very great partnership showcasing our wines in their best light.”

Julie Simon is enthusiastic about joining Presqu’ile, remarking, “I am thrilled to be joining such a strong and dedicated team, where I can be a part of propelling the Presqu'ile hospitality experience forward. And the addition of a permaculture garden not only shows our commitment to great food, it also nurtures the 'sense of place', mirroring our winemaking philosophy."

ABOUT CHEF JULIE SIMON
Julie Simon is a San Luis Obispo based chef and farmer. Ten years ago, Simon was enrolled in university in her native France, ready to follow that path to a law career. Her restlessness and uncanny ability in the kitchen compelled her to move to Paso Robles where her aunt and uncle farmed an olive grove and pressed olive oil. Soon after, Simon landed kitchen jobs in some of the Central Coast's finest restaurants and eventually became executive chef at the renowned Thomas Hill Organics Bistro when she was 23 years old. Julie served as opening chef at Foremost restaurant in San Luis Obispo. Her history in farming and pop-up dinners bring a worthy contribution to Presqu’ile’s vast array of services, further enriching the most sought after wine destination in the area.

Located in the heart of Santa Barbara County’s Santa Maria Valley, Presqu’ile (pronounced press-KEEL) is a small, family-run winery dedicated to making exceptional cool-climate Pinot Noir, Chardonnay and Sauvignon Blanc. Presqu’ile is a multigenerational collaboration between Madison and Suzanne Murphy, their three adult children, Matt, Anna and Jonathan, and their daughters-in-law, Amanda and Lindsey. No strangers to agriculture, four generations of the wine-loving Murphy family have been farming land in Louisiana for almost a century. Led by eldest son Matt Murphy, the family founded Presqu’ile—the Creole word for “almost an island”—both as a tribute to a beloved Gulf Coast family gathering place that was lost in Hurricane Katrina, and because they envisioned Presqu’ile as an island-like haven amid the vines. Also on the team is rising star winemaker Dieter Cronje.

The Santa Maria Valley is one of the most distinctive winegrowing appellations in the world. With one of the longest growing seasons in all of California. The Santa Maria Valley is a true cool-climate winegrowing region, yielding wines of extraordinary elegance and purity—qualities that define the world’s best Pinot Noirs and Chardonnays. To preserve the complexity of these grapes, the Murphys worked with acclaimed San Francisco-based Taylor Lombardo Architects to create a gravity-flow winery designed to Matt and Dieter’s specifications. And to ensure that each wine reflects its vineyard, Dieter practices a naturally minimalist approach to winemaking, with a focus on whole clusters, native yeasts and modest new oak. As a result, Presqu’ile’s wines are pure and purposeful, conveying the authentic charm, complexity and signature Santa Maria spice that have made the wines of the Santa Maria Valley famous among enthusiasts of elegant and balanced wines.