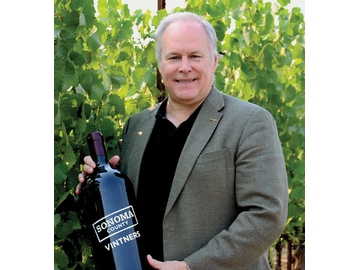 “The Board voted unanimously to appoint Michael Haney,” said Russell Joy, Board of Directors President. “He leads with vision and purpose and is focused on long-term results. Under his direction as interim executive director, Sonoma County Vintners has successfully executed an array of programs and events, which continue to raise awareness for and elevate Sonoma County as a world-class wine region. His presence in the community, work ethic, compassion and authenticity reflect who we are as vintners and growers, and there couldn’t be a better choice to reflect this as the leader of a vintner association.”

“It is an honor to serve Sonoma County Vintners as executive director and assume this role,” said Haney. “I am proud of everything our team has accomplished this past year and am excited to continue our work together to promote Sonoma County, not just here in California, but around the world as well.”

Haney has been acting as interim executive director since February and previously served as director of membership for three years. He has worked to strengthen the relationships with Sonoma County Tourism and Sonoma County Winegrowers—together known as the TRIO. A vintner himself, he has been instrumental in leading wine industry-focused government and community relations, raising much needed awareness about the wine community’s positive impact to Sonoma County.