Lustau Announces the Appointment of Sergio Martínez as Cellar Master 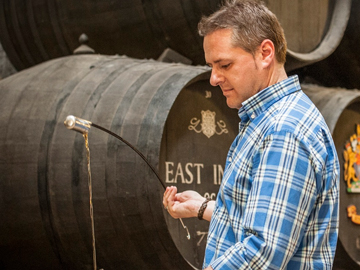 Jerez, 23rd June 2016 -- Lustau, a leading producer of Sherries and Brandies from Jerez, announces the appointment of Sergio Martínez to succeed Manuel Lozano as Cellar Master and head of Lustau’s winemaking team. After 13 years working side by side with Manuel Lozano, Sergio Martinez takes on this important role following the recent passing of his mentor.

Sergio Martínez knows Lustau’s wines and soleras extremely well. For over 10 years he accompanied Manuel Lozano on the daily rounds, chalk and venencia in hand, walking up and down the aisles of the cellar formed by the solera aging casks, analyzing, understanding and caring for the jewels and the secrets which are hidden within the walls of the Lustau bodega.

With this appointment, Lustau’s goal is to maintain the winemaking line which has brought them so much success and prestige in recent years. Luis Luengo, Director of Lustau, states “Sergio has our full backing to lead the Lustau team. There is nobody better than him to preserve the ‘Lustau style’ and bring fresh air to the project.”

A true Sherry lover, Sergio declares Amontillado to be his favorite style. ”Amontillado’s complexity, the rich range of nuances and the elegance that these wines gain from the double aging process makes them unique” he says.

Born in San Fernando (Cádiz), Sergio’s childhood and adolescence were spent living between the villages of the Bay of Cádiz, where he developed a great passion for nature, the sea and the wonderful beaches of the Cádiz coast.

Sergio is married and father to a daughter, soon to turn two, who has awakened in him an unexpected vocation for photography. “As the Classic authors used to say, art needs its muses” he declares.

Lustau is regarded as a worldwide benchmark for wines of the highest quality. The Lustau philosophy has remained unchanged since its inception in 1896: to offer the consumer the widest and most select range of Sherry wines