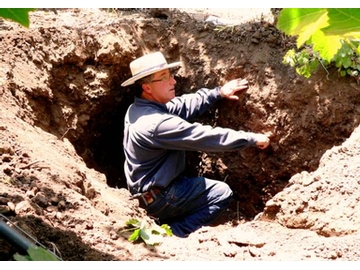 Mark Greenspan, president of Advanced Viticulture Inc., has been confirmed to serve as the American Society for Enology and Viticulture (ASEV) 2015-2016 president. Greenspan succeeds Lise Asimont of Francis Ford Coppola Presents to lead ASEV’s 12-member board.

“Throughout my career, ASEV has been the go-to source for reliable, thoughtful research and science that has been critical to my success and that of my vineyard clients. It’s a real honor to serve as the Society’s new president and to hopefully carry on the impressive work of Lise and the other dedicated ASEV past presidents,” Greenspan said.

Greenspan, a Sonoma County resident, provides premiere vineyard consultation in water management, nutrient management, precision viticulture and vineyard design, establishment and management. He has operated Advanced Viticulture for over 10 years. Previously, he was the viticulture research manager at E&J Gallo, responsible for viticulture experiments in the north coast vineyards and collaborative projects throughout the state of California. He is a monthly contributor to Wine Business Monthly and periodic contributor to other trade publications. He presents at local, national and international events, and is a certified crop advisor (CCA) and certified professional agronomist (CPAg). Mark has served on review panels for the American Vineyard Foundation and Viticulture Consortium - West and Viticulture Consortium - East. He is a member of Sonoma and Napa Viticulture Technical Groups, Sonoma County Farm Bureau and Napa Valley Grape Growers Association. He’s a former director of the UC Davis Trellis Alliance and sponsor of the Sonoma County Winegrape Commission.

Formed in 1950 as a professional society dedicated to the interests of enologists, viticulturists and others in the fields of wine and grape research and production, the ASEV’s membership of more than 2,000 includes professionals from wineries, vineyards, and academic institutions and organizations around the world. In addition to publishing the AJEV, the Society also hosts its National Conference (slated for Monterey in June of 2016) and co-presents the Unified Wine & Grape Symposium in January with the California Association for Winegrape Growers. For more information, visit www.asev.org