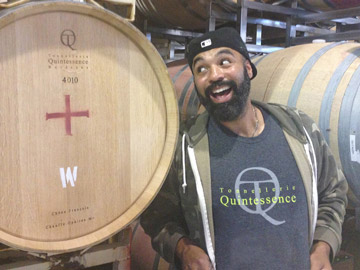 April 23, 2015, San Francisco - Christopher Christensen, “Winesmith and Head Honcho” of Sonoma-based Bodkin Wines, has partnered with Maritime Wine Trading Collective to increase sales nationally. Founded in 2011 with an initial release of 77 cases of Sauvignon Blanc, Bodkin’s production currently includes Chardonnay, Zinfandel, Muscat Canelli, late harvest blends, and a unique sparkling Sauvignon Blanc, the only one made in the U.S.

Viriginie Boone, writing for the Santa Rosa Press-Democrat in January 2014, cited Bodkin as one of three “wineries to watch.” That same year a major wine publication awarded scores of 91 and 92 points along with the “Editors’ Choice” designation to two of the winery’s third vintages of Sauvignon Blanc: the 2013 The Victor’s Spoils and 2013 Musqué Clone respectively.

“When I first met with Chris, I was impressed with his wines and the inexhaustible zeal with which he approaches his business,” explains Maritime CEO Christopher Nickolopoulos. “Up to this point he’s been a one-man operation: winemaker, accountant, label designer, webmaster, sales and PR director. Now he can focus on the winemaking as we build his brand across the country.”

A native of Cedar Rapids, Iowa, Christensen earned a degree in Communications from Stanford in 2003 but didn’t embrace the cubicle life his degree guaranteed. Fortuitously, he was offered an internship in the Sonoma lab of Gallo, where his winemaking journey began. He credits “the school of hard knocks”—nine wineries in 12 years: eight in California including Michel-Schlumberger and Medlock Ames, and one year at BK Wines in rural Australia—for training in his craft.

“In four years I’ve gone from making one label to 10,” states Christensen, “and every vintage has sold out. To increase supply, I need to do the one thing I enjoy most which is winemaking. In partnering with Maritime, I’ll be able to do that. I’m eager to begin this chapter of our story together.”

An avid English history buff, Chris Christensen named his winery in honor of the Battle of Agincourt in 1415, when the outnumbered army of King Henry V, with their bodkin-pointed arrows, defeated the French. But no ransom was to be collected. For on that day, the feast day of Saints Crispin and Crispinian, Henry V and his army of peasant bowmen with their armor-piercing bodkin-pointed arrows gave history a story that inspired Shakespeare to pen a legend for the ages.

584 years later, Christensen first heard this story in Mr. Alberty's English Literature class at Washington High in Cedar Rapids, Iowa. Bravery and brotherhood, arrows and axes, stirring speeches and a smoking hot French princess--the play Henry V had everything an 18 year old nerdling could have wanted: he was hooked. The play's most famous quote ''We few, we happy few'' has been Bodkin’s motto since he started working his way up through world of wine production in 2003. Many of the wines are named for historical events which are included in entertaining detail on the fact sheets.
?
Visit www.bodkinwines.com.

Founded in 2009 by Chris Nickolopoulos and Elijah Pfister, the company has a diverse portfolio of wines from Portugal, Spain, Turkey, South Africa, New Zealand and Italy as well as small production, sub-appellation offerings from California and Washington. Maritime is a Bacchus Capital Management portfolio company.