Foursight Wines will be the first Anderson Valley winery to list ingredients on one their wine labels, and among the first in the United States to include a statement for vegetarian and vegan wine drinkers.

This August the winery will bottle a 2010 Charles Vineyard Semillon that lists ingredients used (grapes and sulfur dioxide) on the back label, followed by a statement that reads “This wine is suitable for vegetarians and vegans,” indicating that no animal-derived ingredients were used in the winemaking process. 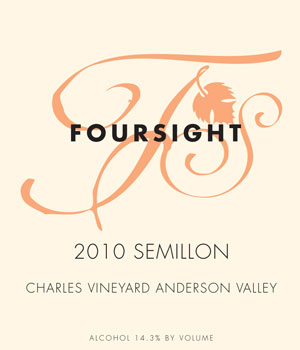 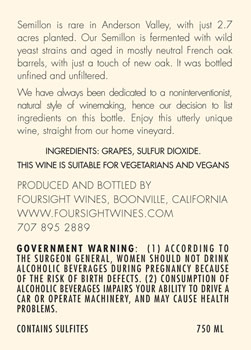 “I’ve noticed a shift toward a more transparent wine industry – one where wineries are now inviting consumers into the inner workings of their cellars – and we want to be at the forefront of that movement,” said Foursight co-owner Kristy Charles. “From daily newspapers now listing alcohol levels for their readers to vegan and vegetarian consumers asking questions about fining agents, consumers are paying more attention to their wines and how they’re made. We think it’s fantastic.”

Foursight makes what they call “honest wines,” a term that stems from their desire to do as little as possible to their estate fruit each year. The Semillon and Pinot Noirs are all fermented with wild yeast and wild malolactic strains and are bottled unfined and unfiltered, although the TTB did not allow them to list “wild ML” on the 2010 Semillon label.

“We’ve been working to get this label approved by the TTB for months,” Charles said. “Agency representatives had never seen an ingredients statement with only grapes and sulfur dioxide and kept insisting that we were missing at least yeast or tartaric acid. It took quite a while to convince them that you could indeed make wine this way. The only thing we weren’t allowed to list, which they simply don’t recognize, is wild ML. We’ll be working on that for next year, and it will likely involve going to the TTB’s Regulations and Rulings Division.”