While many wine brands lost momentum during the financial crisis and its subsequent depressing effect on spending, Brand Argentina continued to ride its wave of success. Since May of 2007 through August 2010, Argentinean wine sales have increased about 88% making Argentina the 5th largest importer of wine into the US in 2009. Even more impressive, according to Nielsen scan data, Argentina wine saw a 38% dollar rise in sales for 52 weeks ending April 2010.

How has Argentina managed to capture the interest of American wine drinkers? What is it about malbec and other Argentinean varietals that have enthralled consumers? More importantly, will Argentina be able to maintain its momentum and see continued growth in the future?

These questions and others were the focus of the recent 6th International Wine Forum in Mendoza where hundreds of Argentinean wineries gathered to debate the future. This article highlights some of the success factors, potential threats, and methods to maintain and enhance the growth pattern. 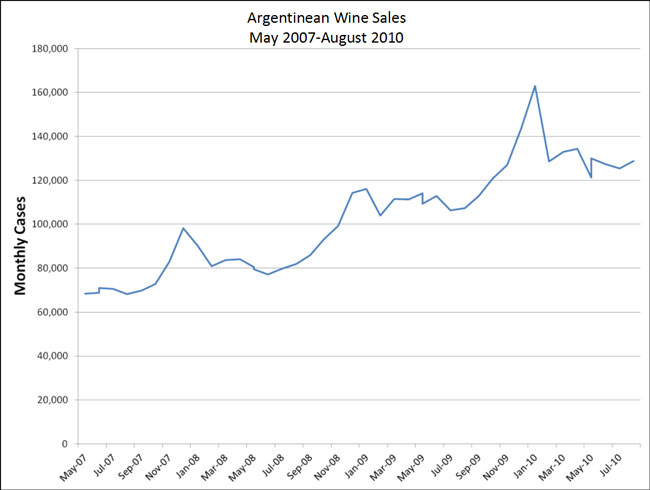 As the fifth largest wine producer in the world with more than 1500 wineries, Argentina had an early start in 1557 when the Spanish brought cuttings from Chile. Then, in the 1860’s, many Europeans migrated to Argentina, bringing Malbec and other varietals. Wine became an integral part of the culture, and by the 1980’s the average per capita consumption was 95 liters per person. However by 1991 this figure fell to 26 liters per person, spurring the wine industry to begin exporting. Some of their export success factors include:

• Malbec as Signature Grape – entering a new market with a signature grape provides a useful element of differentiation, but the style and taste of the wine must also captivate consumers. Argentina malbec does this quite well by delivering dark berry fruit, velvety tannins, and a full, satisfying texture. Millennials, with their tendency to try new varietals from different countries, quickly adopted malbec as a favorite new wine. Disenchanted merlot drinkers found malbec to be a great substitute, and steak eaters searching for something to drink besides cabernet sauvignon, were pleased with how it paired with their favorite food. Thus malbec gained traction and by early 2007 was growing rapidly from a small base. By 2009 it achieved a 50% growth rate in one year.

• Competitive Price Points – due to low labor costs, long-established vineyards, and a favorable currency rate, Argentina is able to produce high quality wine at a low price. The combination of the satisfying taste of malbec accompanied by a pleasing price tag of $8 to $12 hit a sweet spot with recession ravaged consumers in 2008/2009 who continued to drink wine, but ratcheted down from their $15-20 price points and above. When Constellation, the Wine Group and other large producers began to purchase bulk malbec from Argentina and bottle it under new labels, e.g. Marcus James, at even lower price points, malbec became even more accessible to recession-strapped consumers. Low prices accompanied by good quality and taste created even more desire for Argentina wine.

• Industry Strategy/Vision 2020 – in 2000, Wines of Argentina created an aggressive strategic plan, similar to the Australian wine vision. Funding it via a “tax” to all winery members and very little government support, they have been quite successful to date in moving towards their goal of achieving 10% of global wine market share by 2020 – having moved from less than 1% when they started to 4% in 2009.

• Strategic Partnerships – Catena Zapata, one of the largest wineries in Argentina, has developed a partnership with Gallo to distribute many of their brands, including the very successful Alamos label. Other wineries have linkage with international partners who provide funding and distribution access, including Bodega Norton owned by the crystal empire, Swarovski, Cheval des Andes and Chandon Argentina by LVMH, and Bodega Colome by Swiss entrepreneur Donald Hess.

• Relationship Management – in general Argentinean wine producers make multiple trips to the US each year to conduct ride-alongs with distributors, call on retailers, conduct tastings, and participate in Wines of Argentina events. They also invite sommeliers, retailers, and distributors to Argentina where they are hosted in high style with excellent food, treks into the Andes, and tango shows. This type of attention – especially in a saturated market where distributors are looking for reasons to reject brands – goes a long way towards keeping Argentina wine on the shelf.

The most obvious threat would be a backlash against Argentina’s signature grape, but experts have agreed that malbec is no longer just a fad. It has now become so well known that it will continue to be another choice for red wine lovers. Furthermore, viticulture experts believe that the special climate of dry winters and springs in Mendoza allows the malbec berries to remain small, which creates the intense flavor, texture and velvety tannins which cannot be duplicated elsewhere in the world. However, there are other potential threats:

• Water Shortage: drip and flood irrigation are both used, but the largest wine growing region of Mendoza depends primarily on snow from the Andes to supply this water. If global warming should reduce snow fall, water shortage would be a devastating blow. Furthermore, experimentation has shown that Mendoza vines cannot be dry-farmed as in other countries. In a near desert-like situation with sandy soil, the vines die without water.

• Loss of Low-Priced Labor: currently Argentina depends on migrants from Bolivia and Northern Argentina to hand-harvest and prune their vast vineyards. If other opportunities were more appealing for this workforce, or if they demanded higher wages, this could hurt competitiveness. Very few vineyards are utilizing mechanization.

• Over-Production: With a current production rate of 1.6 million tons of grapes per year and 220,000 hectares of vineyards, most producers are planning on expansion to match demand. There is a danger that the expansion will not be coordinated and that Argentina could end up in an over-supply situation. Today they export 30% of production with the other 70% being consumed by the domestic market. Their biggest export market is the US at 32% of exports, followed by Canada (12%), the UK (7%), Brazil (6.7%) and Holland (5.7%).

• Decrease in Marketing: to date, Argentina has exhibited positive marketing efforts – especially on the part of its larger brands. If this were to decrease due to funding issues or other reasons, there is a probable threat of lost market share.
Other possible worries include changes in the currency situation, regulatory issues, and hail – which can reach baseball size in Mendoza and destroy a vineyard in a few minutes. 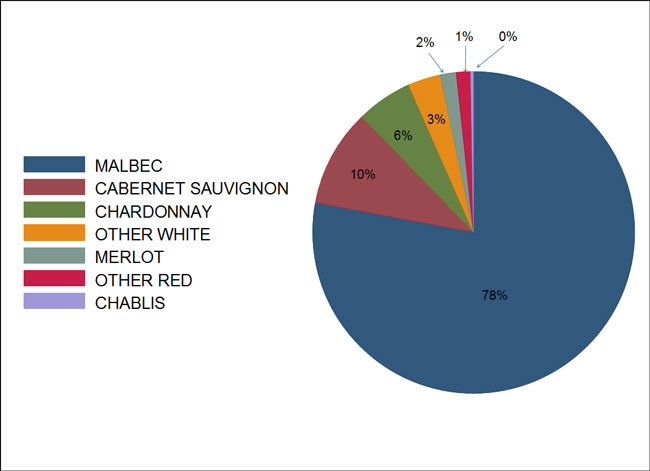 Right now, Argentina is riding a wave of popularity which raises the question of how to sustain and/or enhance their success. This is a situation that has faced other wine nations in the past, with some succeeding and others losing market share. Though there are many variables which impact success, for Argentina wine the following actions are important:

• Maintain Consistent Quality:  in general, Argentina wine is well-made and well-accepted by consumers and wine critics. However, with new wineries coming on line, there is a chance that inconsistent quality may occur. Furthermore if they expand their bulk market too much, loyal consumers could begin questioning quality/price levels.

• Encourage Gradual Trading Up: as the US slowly recovers from recession, there is an opportunity for Argentina to introduce slightly higher-priced malbecs, blends and pinot noir from Patagonia.

• Develop/Launch an Icon Wine: wine critics around the world are giving high ratings to Argentina wines, and there are several priced over $100. However, there is no clear “leader” in the icon wine category, which could create positive buzz and cause wine enthusiasts and collectors to covet the wine.

• Introduce Torrentes and Other Varietals: malbec has eclipsed most other varietals to such an extent that in 2009 it was 78% of all Argentinean wine sold in the US. However, Torrentes and Bonarda (called Charbono in the US) are two other exciting varietals from Argentina, not to mention excellent cabernet sauvignon, Bordeaux blends, sparkling wines, and promising pinot noir from Patagonia.

• Expand into Asia: only a few Argentinean wineries are venturing into China and other Asian markets. Because this requires on a long-term strategy, the time to start relationship building is now.

• Embrace Online Marketing/Sales: an antiquated transportation and logistics system makes online sales and direct to consumer marketing difficult within Argentina, but there is opportunity to expand current efforts with social media and online communication. Furthermore, wineries could explore ecommerce in other countries via partnerships with fulfillment agencies, retailers, and distributors.

About the Authors: Dr. Liz Thach is a Management at Wine Business Professor at Sonoma State University and has just returned from a 5 day trip to Argentina (see http://www.winetravelstories.blogspot.com/ for more detailed information on the trip). Dr. Steven Cuellar is a Professor of Wine Economics and analyzed the Nielsen data on Argentina’s activities in the US market. They can be contacted at Liz.Thach@sonoma.edu and Steve.Cuellar@sonoma.edu.