Exposure can make all the difference in the world. For so many in the wine industry, it was not an uncommon occurrence to see wine at the dinner table. Parents would pass their children a glass, allow them to take a sip and encourage a discussion about what they smelled and tasted. Sometimes, it was a glass at a restaurant, or a friend who brought over a higher-end, rarer bottle. For those who grew up with wine, it wasn’t just some fancy drink to be had for special occasions. It was a way of life.

Like so many Americans, Dwyane Wade was not exposed to wine at an early age. He didn’t see a lot of people drinking it, and it certainly wasn’t a topic of discussion at dinner. But now the former NBA star and three-time champion is out to change that, to make sure that wine is accessible to everyone.

“When I first came in, I didn’t know a lot about wine because I wasn’t exposed to it,” he said. “I looked at that as an opportunity to eventually one day, put myself in a position to be able to do that for my community, for wine to feel more diverse and more inclusive than it does now.”

Wade’s wine revelation came via support from his Miami Heat teammates Chris Bosh and Lebron James, who showed him the food and wine lifestyle in the Napa Valley. It was through those dinners that an interest and a passion for wine were ignited.

Wade is a lifelong learner, describing himself as one always open to knowledge, growth and being educated by the best. When the Heat missed the playoffs one season, he signed up for a Harvard Business School course to pass the time. Then, when it came time for him to retire from the NBA, he didn’t just settle down quietly. He set out to build a business empire fueled by the topics and products that excited and engaged him.

In 2014, he was invited to observe a Napa Valley harvest with Jayson Pahlmeyer and he enthusiastically accepted.

“Once you get the opportunity to walk through each step, now you appreciate not dripping any wine on the table at all, because you know the hard labor and the hard work that went into each bottle of wine,” Wade said. “It made me just appreciate wine and it made me appreciate what these guys do for a living a lot better.”

The two vibed off each other during that trip and soon Wade and the Pahlmeyer family decided it would be fun to start a project together—and thus, Wade Cellars was born. “They were grabbing my hand and walking me through the process because I’ve never really been through it, but I felt that the wine space really represented my brand and who I am,” he said.

With some hard work and the assembly of a great team, Wade Cellars launched with ultra-premium Napa Cabernets, much like those Wade drank with his teammates. But not everyone could afford or have access to those wines, and he wanted to be sure that no one was ever turned away from wine. 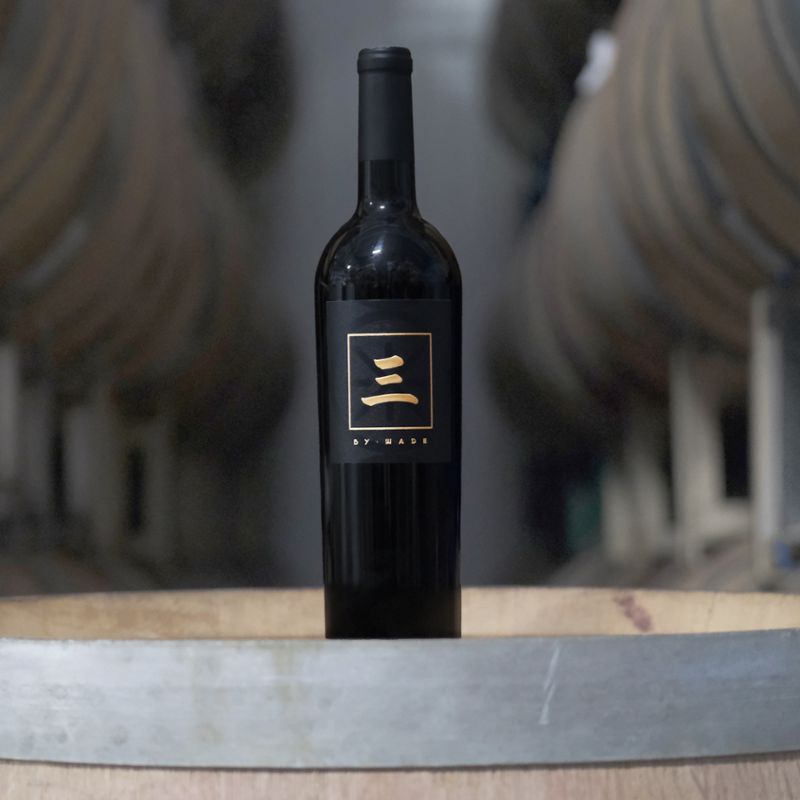 He developed the Three by Wade line and released a Cabernet Sauvignon sourced from vineyards across Oakville, St. Helena, and Napa, that retails for $40 per bottle. The decision to launch the line with a Cabernet was an easy one—it’s where his palate was at the time and what he enjoyed.

“I think that the Cabernet gives me the perfect in-between of what you’re looking for as a new wine drinker or as an experienced wine drinker. I think it’s the perfect kind of wine,” he said. Fans of the wine soon asked for a white wine as well, and the team listened, extending the portfolio with the Three by Wade Blanc as well as a California-appellated Rosé.

Though he and the team are still honing their brand identity, Wade is excited to be part of the industry. At the start of 2020, they were in five markets. Today, they are in 18 and looking to reach 38 markets by August 2021 as they ramp up production.

As Wade promotes the brand, he’s heard a lot of skepticism that he’s just another celebrity endorser. Though he doesn’t have a wine background, he wants the wine community to know that he’s in it for the long haul and wants to change the stigma of the celebrity wine.

But most importantly, he wants those who aren’t in the industry to know that wine is for everyone.

“What’s probably the most important thing is if we can bring others along that have never been exposed to wine. Then I feel like we’re doing our job in this space,” he said. “It’s not just selling wine and making a dollar. It’s really educating people on the beauty of this art.”

02/14/20
Wayfarer, Wade Cellars and Newfound Wines Get to Work in Convenient Downtown Location