Scheid Family Wines 2019 Sunny with a Chance of Flowers Chardonnay: Doubling Down on Positivity and Balance with "Better for You" Offering

It was important to find ways to look on the bright side last year, and that’s just what Scheid Family Wines did.

Back in January 2019, Heidi Scheid, executive vice president for Scheid Family Wines was introduced to Theresa Scripps, a former creative agency head who approached the company with a concept for a brand called “Sunny with a Chance of Flowers.”

“I loved the Sunny concept the instant that I saw it. The unconventionality of the name and the positive attitude that it exuded, it all just made me smile.” Heidi said. She showed it to her colleagues, and even to her 27-year-old daughter. They all loved it.

At the same time Sunny was being discussed around the office, White Claw was taking beverage alcohol sales by storm and the wine world was left reeling. Scheid, like so many others, watched the hard seltzer category grow and wondered whether wine could compete with its own low calorie, low sugar, low alcohol brand. The team dove in, looking at research and found that there could be a place for such a wine.

“Our market research was supporting what our gut was telling us,” she said.

Scheid started having early conversations with her retail and distribution partners. While none of them were ready to dive in and launch a new brand at that point, none of them said “no” either. In fact, they were intrigued.

So, Heidi approached the winemaking team to see if a low-alcohol, low-calorie and zero-sugar wine that still tasted great was even feasible.

Enter winemaker, Millennial, former Division I pole vaulter and celebrity personal trainer, Casey Di Cesare. He was ready to take on the challenge.

“Casey thinks outside of the box. He has a very optimistic, can-do attitude and was really excited to see where we could get to with this wine,” Heidi said. Di Cesare set about researching how to make this happen, running trial after trial to find the perfect combination of harvest timing, fermentation conditions, and alcohol removal method.

In the end, he said, the process is pretty simple. The grapes are farmed in the same way as they would for any other wine, and for the Chardonnay, that meant grapes reached full Brix (between 23° to 24°), with balanced acid. The grapes were pressed and fermented to dryness with the same select yeast the winery uses for all Chardonnays. Di Cesare did, however, ferment a little colder than usual to keep the fruity aromatics intact. 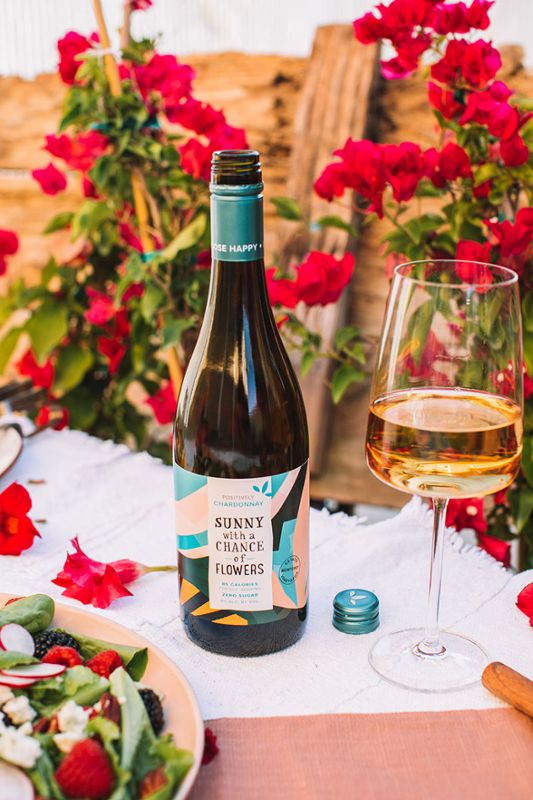 The only major winemaking variance came when it was time to reduce the level of alcohol. After testing several different methods and products, they developed a proprietary two-step process that uses reverse osmosis and osmotic transport to hit the low alcohol jackpot—without removing any of the aroma and flavor compounds.

“The alcohol is slowly pulled out, and you can see the evolution of the wine, you can see where it’s headed,” Di Cesare said. “Eventually we found that 9% was that sweet spot where we retained all the flavors and we were able to still deliver a product that, for us, stood up to its fully alcoholic counterparts.”

This was, of course, the key to finding a “Better for You” wine, as the company calls it, that would do well in the marketplace.

“Finding the sweet spot was the most important thing because at the end of the day if the wine doesn’t taste great, doesn’t taste like wine, you’re not going to have successful product,” Heidi said. “When you remove alcohol you also risk losing aroma, flavor and, very importantly, mouthfeel and texture—all those things that make wine so great with food and a pleasurable experience.”

So, Scheid Family Wines had a viable way of producing low-alcohol wine that still tasted great, and a brand idea that the team adored. It was about this time, nine months into the work, that the “Sunny with a Chance of Flowers” and “Better for You” projects converged.

On June 16, 2020, about three months after the start of COVID-19 lockdowns, Sunny with a Chance of Flowers launched with a Sauvignon Blanc, a Chardonnay and a Pinot Noir. In addition to a 9% abv the wines featured only 85 calories, zero sugar, sustainably grown grapes—and listed carbs, protein and fat prominently on the back label.

This “Better for You” wine category has taken off in the last two years, a continuation of the health and wellness trend that emerged over the last decade. Consumers have proven that they are open to these options, and wineries are doing their best to keep up.

Scheid isn’t too worried about the increased competition, though. It’s a brand they all love and, as Heidi reports, it’s a wine that a lot of her team drinks at home. “Everyone in our company is invested in the success of Sunny with a Chance of Flowers, from the vineyard to the winery to bottling to warehouse,” she said.