California wine exports have grown nearly 70% by value in the past decade
by Wine Institute (press release)
March 19, 2018

SAN FRANCISCO — U.S. wine exports, 97% from California, reached $1.53 billion in winery revenues and 380 million liters (42.2 million cases) in 2017. Golden State exports were down 5.5% in value and 7.9% in volume due in part to the strong dollar, heavily-subsidized foreign wine producers and competitors forging free trade agreements in key markets.

“California wine exports have grown nearly 70% by value in the past decade. Our global marketing efforts focusing on the quality and diversity of California wine continue to gain traction with our trading partners throughout the world,” said Wine Institute Vice President of International Marketing Linsey Gallagher. Gallagher oversees Wine Institute’s California Wine Export Program, involving more than 175 wineries that export to 138 countries, and 15 representative offices conducting programs in 25 countries across the globe.

Canada
“Despite a flat wine market in Canada and ongoing exchange rate challenges, Canada remains the top dollar value market for California wines. Canadian consumers have confidence in the quality and value offered by California wineries whose wines are successful in all price segments,” according to Rick Slomka, Wine Institute Trade Director for Canada. “Although recent price increases may lead to slower growth, new product introductions and line extensions for popular brands have kept the momentum strong for the California wine category. U.S. wines were the number one table wine category by value in Canada in 2017 for the fourth consecutive year with almost Canadian $1.1 billion in retail sales. “We anticipate continued growth in the liquor board stores and are also looking forward to working with the provincial governments to improve and equalize access to new grocery distribution channels.”

United Kingdom
“Sales of premium, super-premium and luxury Californian wines continue to be robust despite very challenging currency-led price increases. In 2016, the pound was valued at $1.46. A year later it dropped 17% to $1.21. Price increases were largely passed through to consumers as increased shelf prices. The pound has strengthened in the past six months, and we expect this will be positive for California wines in the first half of 2018 as importers look to replenish stocks at more favorable prices,” said Wine Institute United Kingdom Trade Director Justin Knock, MW.

Japan
“Due to the U.S. withdrawal from the Trans-Pacific Partnership and the Japan-EU Economic Partnership Agreement, all of the U.S.’s wine region competitors will enter Japan duty free by 2019 while the full 15% import duty will continue to be charged on California wines. Japanese importers have been importing U.S. bulk wine to reduce the import duties, but Chilean and Australian bulk wine is already duty free and European bulk will soon have duty free status. Bottled U.S. wine exports to Japan decreased 20% by volume in 2017, but value increased 12.1%. Ultra-premium wines are less susceptible to the import duty disadvantage, and Wine Institute’s Japan office has been consistently promoting the premium category with its wine-by-the-glass restaurant promotions,” said Ken-ichi Hori, Wine Institute’s Japan Trade Director. “U.S. wine importers in Japan hope the U.S. will establish a Free Trade Agreement with Japan as soon as possible to abolish the heavy import duty disadvantage of U.S. wines, which will help the entire American wine category grow in Japan.”

China & Pacific Rim
“U.S. wine exports to Greater China (Mainland China, Hong Kong and Taiwan) were strong with 10% growth to over $210 million in 2017. Also experiencing growth were South Korea, Singapore and the Philippines with value increasing more than volume, signaling the premiumization trend. For Asia, the main story is the economic growth in China, the largest country in the world in terms of population. China has a rapidly growing middle class that is traveling outside the country and adopting many Western tastes and lifestyle preferences. Consumption of imported wine has increased 2.5 times in the last five years on the Chinese Mainland. We expect this trend to continue for the foreseeable future,” said Christopher Beros, Wine Institute Trade Director for China and Pacific Rim. 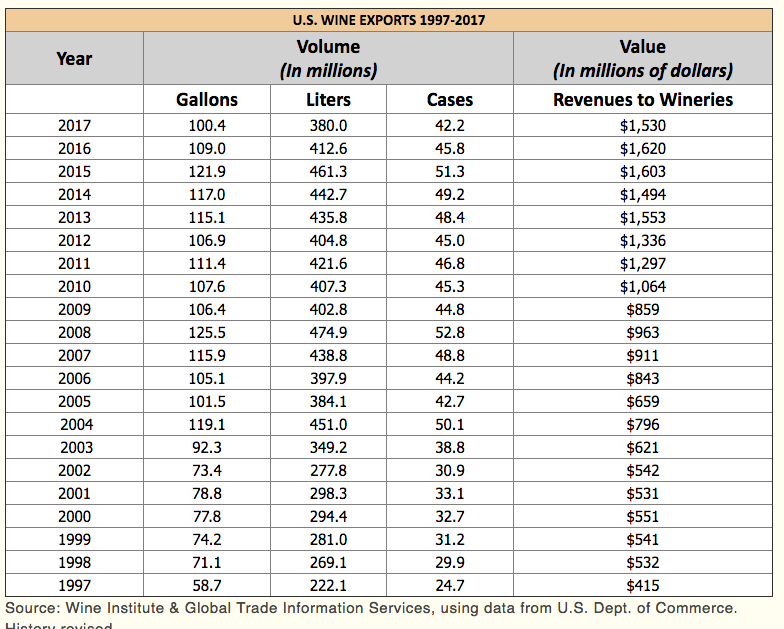 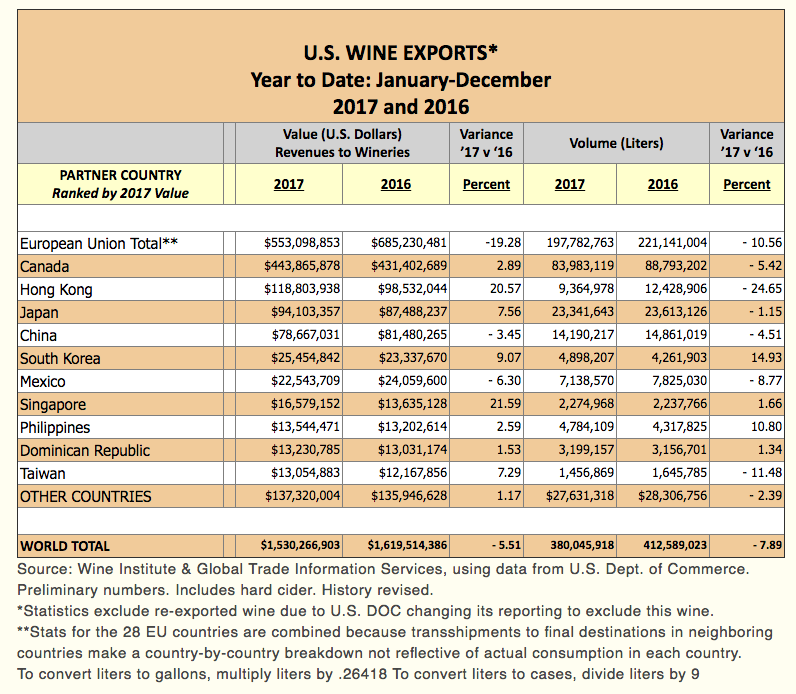 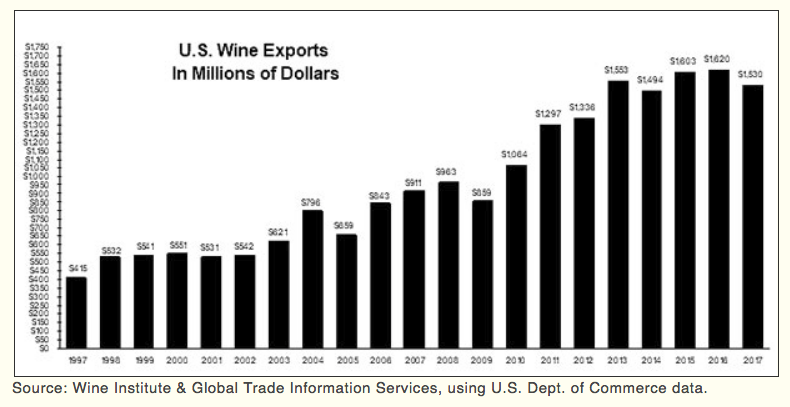