Oregon wine is hot! According to Nielsen scan data, sales of Oregon wine achieved 14 percent volume growth in 2016 compared to a 2.8 percent increase for all wine. Much of the growth is driven by Pinot Noir, Oregon’s signature grape, with more than 62 percent of that variety planted. With such positive reception, Oregon wineries are now focusing more on the distinct differences in taste and profile of their 18 AVAs. 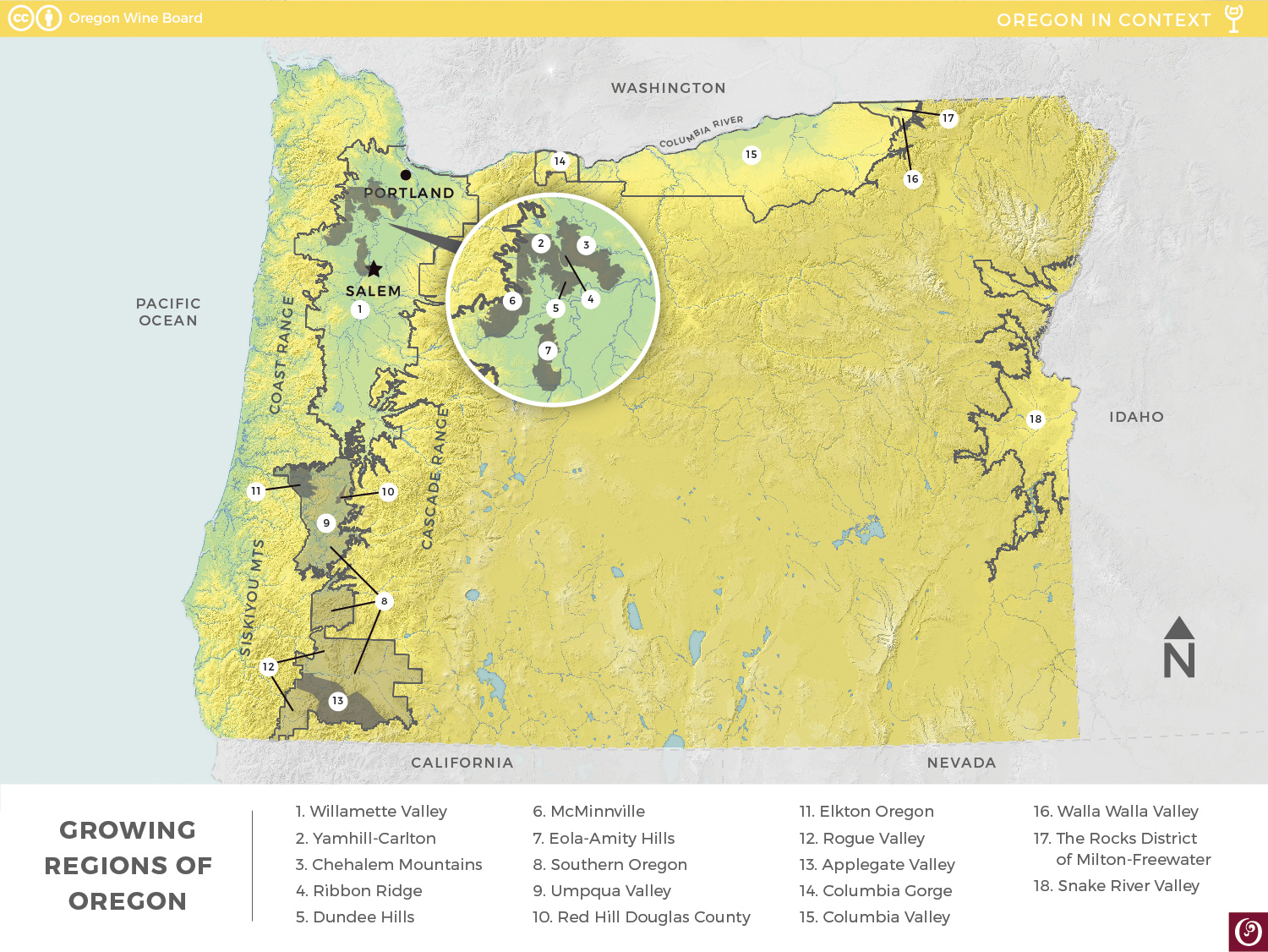 Though research shows that the majority of wine consumers do not recognize smaller AVAs within a region, the connoisseurs, sommeliers, wine enthusiasts and image seekers do. It is these types of consumers that also know the famous villages and vineyards of Burgundy. Though only around 28 percent of the American wine consuming population, they are responsible for 41 percent of the profits, according to the most recent Genome study conducted by Constellation Brands in 2014. These types of consumers may also be interested in learning about the distinctive climate, geology and taste markers that can be found within the Oregon AVAs.

Often compared to Burgundy, and also attracting much investment from that region, Oregon boasts a similar climate and latitude. Likewise, Oregon has many small producers, with 70 percent of its 725 wineries producing less than 5,000 cases per year.

At a recent blind AVA tasting of Willamette Valley Pinot Noirs, some of the following distinctions were identified. The six nested AVAS are organized from the north to the south.

With a warmer climate than the Willamette Valley, many Southern Oregon wineries can ripen varieties such as Tempranillo, Malbec and Rhone whites like Viognier, Roussane and Marsanne, but their largest crop is still Pinot Noir at 40 percent of the production. Given the warmer climate, they generally produce Pinot Noirs with riper flavors and larger tannins. The five AVAs nested within Southern Oregon and the dates they were established include: 1) Umpqua Valley AVA (1984), coolest region; 2) Rogue Valley AVA (1991), warmer region, sheltered from the cool Pacific by mountains; 3) Applegate AVA (2001), warm region on the Applegate River with alluvial and granitic soils; 4) Red Hill Douglas County AVA (2005) single estate, very warm AVA; and 5) Elkton Oregon AVA (2013), a smaller AVA within Umpqua Valley that is high in elevation and closest to the Pacific Ocean, producing aromatic Rieslings and Gewürztraminers, as well as delicate Pinot Noirs.

The other five AVAs of Oregon are shared with neighboring states. The Columbia Gorge, Columbia Valley, Rocks District and Walla Walla AVA also cross over into parts of Washington state. The warmer regions, such as Walla Walla and the Rocks District, are known for producing big, complex red wines made from Syrah and Cabernet Sauvignon. Cooler Columbia Gorge with vineyards stretching along the Columbia River is reminiscent of Germany, with a partial focus on Riesling, but they also produce elegant Pinot Noirs. The Snake River AVA shares its border with Idaho, and with its wide swings in diurnal temperature can easily produce delicate Rieslings and massive Syrahs.

At the conclusion of a 2017 Oregon Wine Tour by more than 30 MWs, one British wine buyer stated: “A common theme (of the Oregon wines) has been the elegance and balance between ripe, vibrant fruit, refreshing acidity and subtle, integrated oak…..they are ‘light on their feet.’”

Dr. Liz Thach, MW is the Distinguished Professor of Wine and Management at Sonoma State University in the Wine Business Institute. She can be contacted at Liz@lizthach.com.