As the world’s largest wine market since 2010 (Wine Institute, 2015), the United States has become a focus for most major producers of wine. But the American wine consumer has many diverse tastes and buying preferences, and some of these can change quickly based on popular television shows and movies, or new trends in dining and beverage consumption.

So what does the American wine consumer prefer today, where do they purchase wine, why do they drink it and how do they interact with wine on social media? These are just a few of the questions that are explored in the annual American Wine Consumer Preference Survey launched by Sonoma State University (SSU) and the Wine Business Institute.

About the Survey and Sample
First conducted in 2014, this is the second annual survey, and was launched in May 2015. It was developed by SSU researchers who contracted with Survey Sampling International to collect household panel data from wine drinkers across the nation.

Wine Consumption Frequency and Preferred Varietals
The sample enjoyed drinking wine because 56 percent reported they consume wine daily or several times per week, making them "High Frequency Wine Drinkers," according to Wine Market Council (2015) segments. The remaining 44 percent are considered to be "Occasional Drinkers."
Respondents were given a list of the 12 most frequently purchased wine varietals in the U.S., based on Nielson scan data (2015). The chart below illustrates their responses to the question: “What are some of your favorite wine varietals? Check all that apply.” 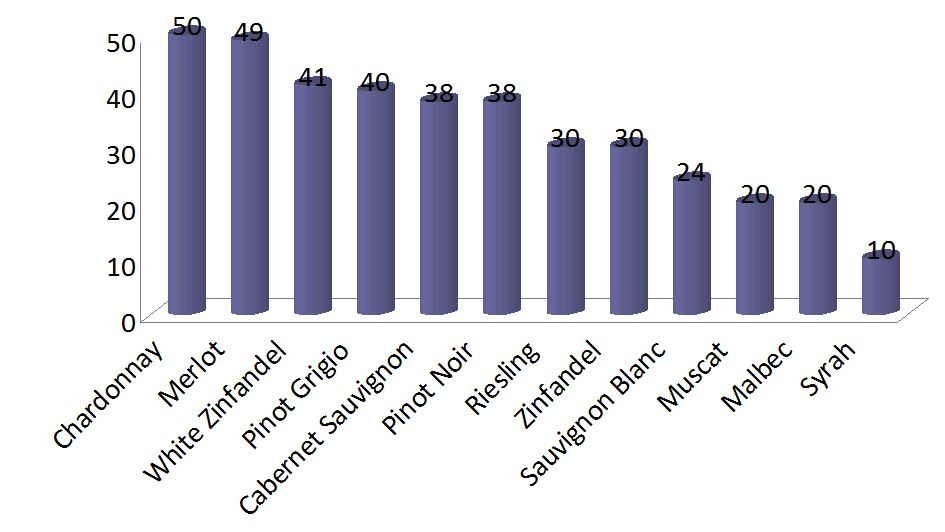 Americans Love Fruity Red Wines
In addition to varietal preferences, respondents were asked to select their favorite types of wine. The highest scoring was red (74 percent), followed by white (72 percent), rosé (43 percent), sparkling (42 percent), dessert (19 percent) and fortified (8 percent). A question about wine style was also added: How do you prefer your wine to taste? Check all that apply. The results, illustrated in Graph 2, show that fruity, semi-sweet, and smooth were preferred styles by the majority of the consumers. 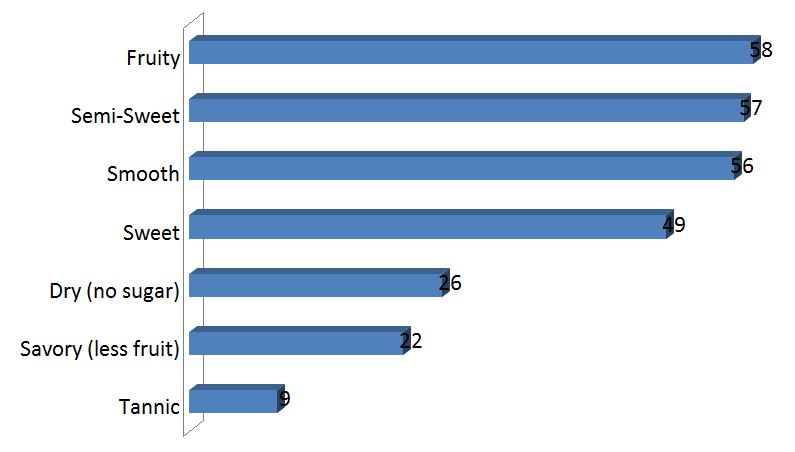 The largest majority of respondents reported that the reason they drink wine is because they like the taste, followed by relaxation and socialization reasons. (See graph 3) 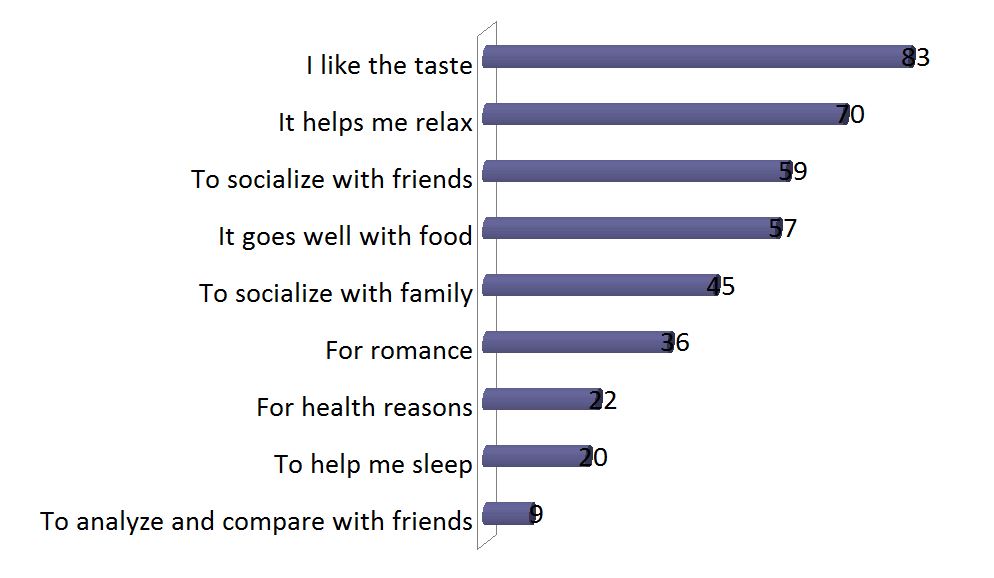 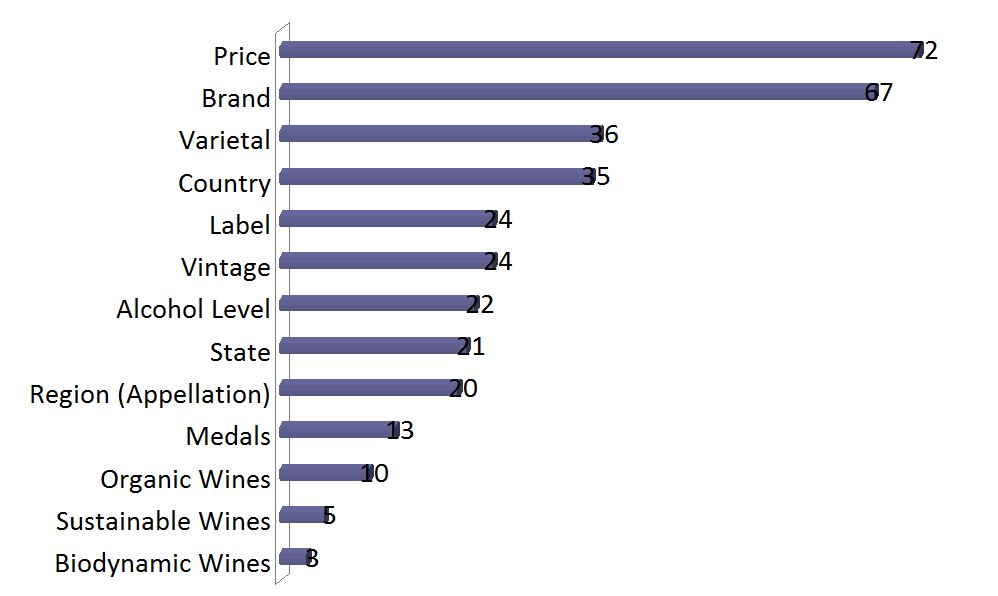 Since country was identified as the fourth most important decision factor for purchasing wine, the data were analyzed further to examine country preferences. Wine made in the U.S. was the most popular with 95 percent of the sample reporting they have purchased U.S. wine in the last year. This was followed by Italian wine at 50 percent, French wine at 44 percent, Spanish wine at 32 percent and Australian wine at 26 percent.

Once again, the categories of organic, sustainable and biodynamic wines showed up last in the decision-making process. This may be due to the fact that previous research shows that many Americans already consider wine to be a natural drink, whereas others are confused by the many environmental and organic certifications advertised (Sullivan, 2010).

Wine Shopping Locations & Price
In terms of preferred shopping location for American wine consumers, buying in a wine or liquor store is the most common. This makes sense because it is still not possible to purchase wine in grocery stores in all 50 states. Participants were asked to rate how often they purchase wine at these locations with possible responses of Never (0), Rarely (1), Sometimes (2), Often (3), and Almost Always (4). In this study, 30 percent of the respondents said they purchase wine in a wine/liquor store almost always, which caused the overall rating to be 3.73, whereas only 17 percent said they almost always purchase wine in a grocery store, resulting in an overall rating in that category of 3.12. Online wine sales are still quite small with only 6 percent of the sample reporting they almost always purchase wine online. 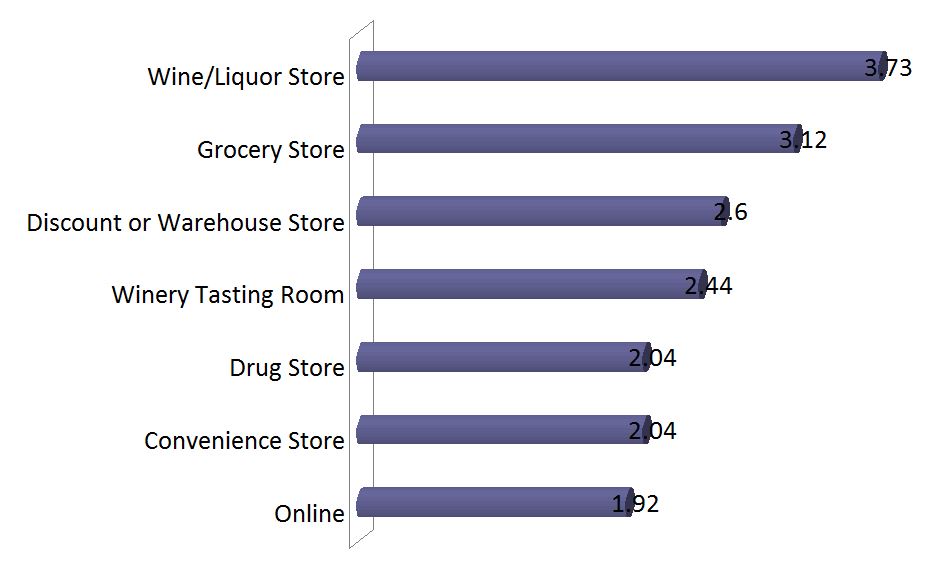 Wine Tourism in the U.S. and Abroad
American wine consumers appear to enjoy visiting wineries as tourists, because 58 percent reported that they had visited wineries in other regions to taste wine. When asked to select which states they had visited wineries, California was identified by 61 percent of the sample, followed by New York at 30 percent, Washington (23 percent), Oregon (20 percent) and Florida (18 percent).

American Consumer Perceptions of Wine and Health
Moderate consumption of red wine is said to provide health benefits such as reducing heart disease and increasing longevity (Vasanthi et al, 2011). The sample appears to agree with this perception. When asked which types of wine they thought were most healthy, about 89 percent of respondents indicated red wine, followed by white wine (34 percent), rosé (18 percent), sparkling wine (10 percent) and fortified wine (6 percent). When compared to other types of alcoholic beverages, 82 percent of respondents considered wine to be healthier to drink than beer and 83 percent reported they thought it was healthier to drink than spirits. Regarding sulfites in wine, however, 58 percent reported that they believe the sulfites can give some people headaches.

Wine Social Media and App Usage
Wine is regarded as an “experience good” in that wine purchase of a specific brand is a personal choice and usually made after tasting. However, many consumers do not have that choice and often rely on experts and friends to help them to decide which wine to purchase. Nowadays, they are more likely to use social media search engines to seek expert advice on wine purchase (Newman 2010; Breslin 2013).

Graph 6: Social Media Use by Percentage of Respondents 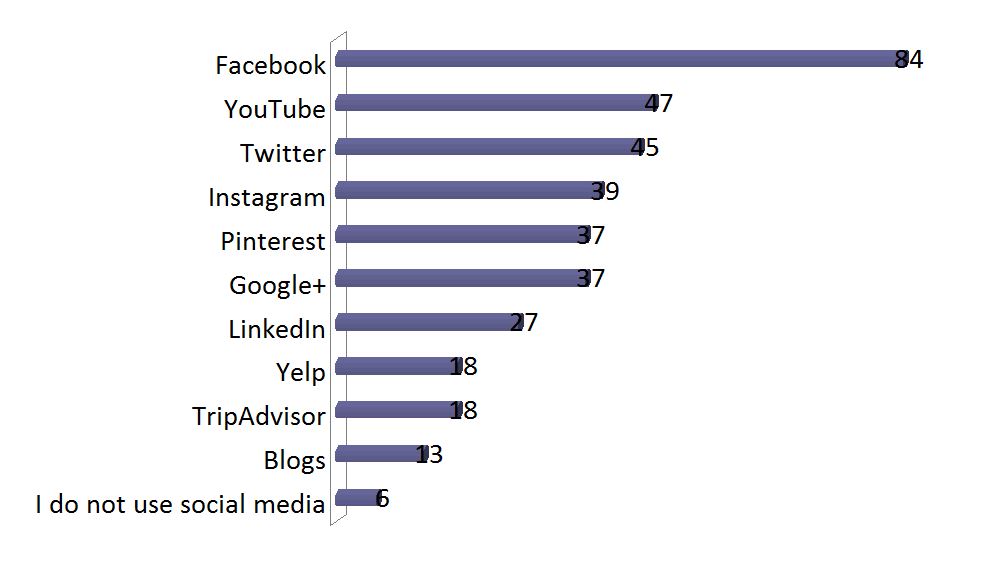 With mobile commerce predicted to grow 48 percent in the U.S. to $90 billion by the end of 2017, (Forrester, 2012), it is worthwhile to track smartphone usage of wine drinkers. According to the sample, 90 percent now own a smartphone and 43 percent use it to check prices on wine.

Of the 26 percent that used wine apps, the most popular was Vivino at 17 percent of the sample, followed by HelloVino and WineSearcher at 15 percent, and Delectable at 11 percent.

Implications – What Does This Mean to Wine Marketers?
The American wine consumer has both a predictable and contradictory personality. For the past decade Chardonnay has been the favorite varietal of the country, but overall Americans drink more red wine than white wine. They can easily be influenced by Hollywood and dining trends, as was the case with the movie Sideways and the desire to drink more Pinot Noir, but they have not given up their love for the smooth tannins of Merlot, now often bottled as a “Red Blend.” Though many loudly profess they only drink dry wine, the statistics show that fruity, semi-sweet, and smooth are more important.

American wine drinkers have also embraced smartphones, social media and wine, though only a small percentage buys wine online. This may have to do with the fact that regulations make it complicated to ship wine to a residential home. Moreover, the average cost of wine purchased online is higher than the $10 to $15 bottle price most Americans are willing to pay.

So what does this mean to wine marketers? Clearly knowing your segment of American consumers and their likes/dislikes is crucial. The connoisseur segment for example, is willing to pay much more for wine and may prefer dry/tannic styles. However when concentrating on the average American wine drinker, this study has several clear take-aways:

Future Questions for the Survey: If you have suggestions on additional questions that should be added to the 2016 survey, please let the authors know. The survey is launched each May. WBM

Dr. Liz Thach, MW (Liz@lizthach.com) is the Distinguished Professor of Wine and Dr. Kathryn Chang (changkat@sonoma.edu) is an assistant professor of accounting at Sonoma State University in the School of Business and the Wine Business Institute.