Conditions across the western U.S. have continued warmer and drier than normal through June. Temperatures within the wine regions in the western and central valleys of California, western valleys of Oregon and across into eastern Washington during the month were approximately 1 to 4 degrees above normal (see figure below). The northern Rockies and scattered areas in Texas and along the Gulf Coast were cooler than normal during June (mostly due to wetter than normal conditions), while the eastern U.S. was warmer than normal. Although June brought some rain during the last week of the month, amounts were generally low except in the Cascades of Oregon and Washington. Nearly all of California and most of the southwest continue to have severe to extreme dry conditions (see figure below or attached). From the Rockies eastward large areas saw much above normal precipitation while portions of the southeast were quite dry in June. 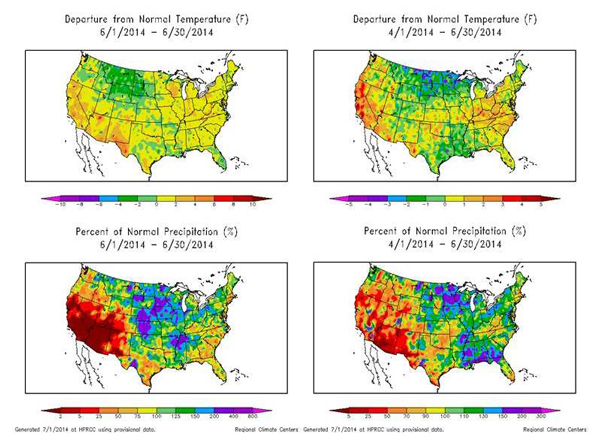 In Oregon temperatures in McMinnville, Milton-Freewater, Roseburg and Medford ranged from 0.8 to 2.1°F warmer than average leading to 2014 growing degree-days that are similar or slightly above the 2013 values on this date (see attached). All four locations in the attached plot are running 25-50 percent above their long term average for the first three months of the growing season during (1981-2010).

The general forecasts for the spring and early summer have largely held true with continued warm and dry conditions in the western U.S. Currently the 6-10, 8-14 day, and 30 day outlooks tilt the odds to this trend continuing with normal to warmer than normal and drier than normal conditions over the west. During July expect the wax and wane of periods that are much warmer than normal with slight cool downs sprinkled in between. Any rainfall that comes in July is likely going to be from the start of monsoon moisture building over the desert southwest bringing the increased likelihood of thunderstorms northward. However, these tend to be hit or miss, so not much precipitation is expected.

The longer term forecast extended out to 90 days (July-Aug-Sept) from the Climate Prediction Center forecast is also tilting the odds to continued warm and dry over the west. El Niño conditions in the tropical Pacific are continuing to develop, but not likely to peak until later in the fall or early winter. El Niño does not have a clear signal over the western US, with weak events not affecting the region much if at all, while stronger events tend to make things warmer and drier in the PNW and warmer and wetter from the Oregon-California border southward. Only time will tell how this years predicted El Niño development will ultimately play out.

In summary, all evidence continues to point to a warmer and drier than average growing season across the west.