Napa Valley growers often tie grape prices to wine market prices, using a rule of thumb that 1 ton of grapes ought to be priced at 100 times the retail price of the bottle they go into. Using this guideline, Cabernet Sauvignon grapes priced at the 2019 district average of $8,000 might be expected to be used exclusively in wines selling for $80 per bottle.

After skyrocketing between 2012 and 2018, however, average Napa grape prices fell off in 2019 and plummeted in 2020 because of wildfires, in some instances leading to significant discounting at retail.

“We just need to be careful we don’t get too far out ahead of ourselves on grape pricing,” Robert Nicholson of International Wine Associates (IWA), a boutique M&A firm, told Wine Business Monthly.

Nicholson was one of the speakers participating in an online seminar focused on vineyard values presented by Napa Valley Grapegrowers last week.

During the seminar, appraiser Tony Correia and Nicholson’s IWA colleague Josh Grace both called attention to Napa Valley Cabernet Sauvignon that sells in Costco stores for $12.99.

“If we're worried about protecting the brand of Napa Valley, is this a good thing?” Correia asked. “Yes and no,” he said. “It's moving a lot of that bulk wine through the pipeline and getting it out of the tanks, but if the consumer gets used to seeing that Napa Valley Cabernet for $12.99 are they going to be willing to pay $70 two years down the road when the world is restored?”

According to the CDFA/NASS's California Grape Crush Report, the average price of Cabernet Sauvignon in Napa County exceeded $8,000 per ton in 2019. The table below indicates that about 3 million cases of Cabernet Sauvignon annually produced in Napa would need to fetch at least $80 per bottle using the previously mentioned one-percent rule of thumb.

Adding up the case volumes of the top 22 Napa-based brands by volume indicates 1.2 million cases of Cabernet sold for an average of $47 per bottle—less than one might expect given where Napa grape prices were in 2018 and 2019. That, in turn implies that another 1.6 million cases of wine produced from other brands would need to sell for an average of $103 per bottle under the 1 percent rule.

“There is a significant amount of value leakage if you think 1 percent is the right economic metric for valuing grapes,” Grace said. “It appears it's probably on the winery side, which begs the question: are wineries taking on too much risk and are growers going to be encouraged or pushed by the market to lower prices?”

The chart below shows values by location category compared to grape prices in those prime, secondary and outlying areas.

Tony Correia said there’s been considerable activity in Oak Knoll and in Yountville, a few transactions in Rutherford, and that more recently there’s a lot of activity in Carneros, which had been very slow for many years.

The highest vineyard prices in Napa Valley exceed $550,000 per acre for a very small, super premium vineyard on top of the Oakville Ridge on the east side of the valley. Correia said vineyards going for $500,000 an acre come with established histories of very high grape prices for very expensive bottles of wine.

Conversely, he said not every vineyard in a high-priced AVA such as Oakville or Rutherford is a super-premium vineyard. Correia said there’s been a little bit of a downturn in vineyard values in Oak Knoll in the past year but said that is probably a function of the market stabilizing after a big run-up in pricing in the boom years of 2012 to 2018.

“The thing we need to remember is that nature and the wine industry are incredibly resilient.”

How Napa Stacks Up Against Bordeaux

The first table below lists most of the recent vineyard transactions in Napa. Robert Nicholson said the buyers are all growers except Stag’s Leap Wine Cellars, reversing the trend of the last decade where wineries most often were the acquirers.

Of Napa’s 45,000 planted acres, 30,000 acres are planted to Bordeaux varietals, including whites, Grace said. If you sum up all of the top regions of Bordeaux—they add up to roughly 25,000 acres, so production coming out of Bordeaux is comparable to Napa in size.

Transactions, which tend to be less frequent in Bordeaux than in the Napa Valley, are based on the Chateau model, involving a winery, vineyards, inventory, case goods, library, wine in barrels, brand name and intellectual property -– and very often a large and substantial old house, the Chateau. Typically that total value is then divided by the gross vineyard acres. It makes for pretty spectacular pricing per acre.

The second table below looks at recent winery transactions in Napa using the Bordeaux model for an average price per acre. Nicholson said it indicates that on a comparative basis, perhaps Napa doesn't have quite as far to go in terms of catching up with Bordeaux as most people might expect. 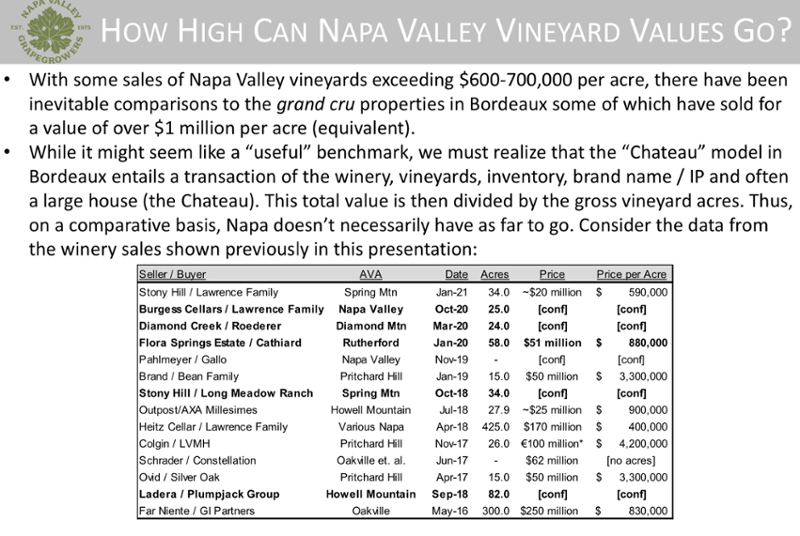 Established in 1990, IWA is a leading M & A advisory boutique with over $1.8 billion in transactions completed. IWA manages the valuation and sale of wine and liquor businesses and vineyards for family owned and multinational companies. learn more

The Correia Co. is a firm specializing in providing property appraisal and consulting services to the wine industry.