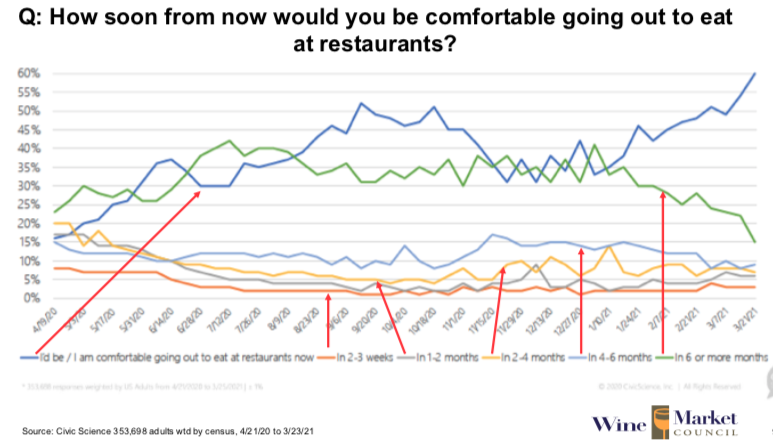 Infection rates are dropping while US vaccination are increasing, unemployment is getting back to normal, and the CDC has even removed some mask mandates.

While many pandemic hotspots remain dire, the outlook in the United States has improved dramatically and that has the wine industry wondering about the prospects for a return of wine tourism.

During a recent webinar hosted by the Wine Market Council (WMC), David Bratton, managing director of the market research firm Decision Analysts said the company has been tracking an increase in travel enthusiasm as safety concerns fall. “Fortunately, that comfort level has been growing over time and right now almost two thirds of us feel ready to travel in some way,” he said. “What’s behind this is, of course, the vaccines.”

Among travelers who describe themselves as wine drinkers, Bratton said these consumers are more excited to travel, plan to take more leisure trips in 2021 and expect to spend more money on travel than average. Yet they are also more worried about getting COVID, with 62% expressing a concern about contracting the virus compared to just 53% on average.

A separate survey by the WMC in fall of 2020 also found that COVID concern was higher than average among core wine drinkers.

“You absolutely have to understand that the people coming to your wineries are going to be at an elevated level of concern,” Bratton said. “Not that they’re going to be afraid to go there necessarily, but they’re going to want you to do the right thing for them and make sure that they are taken care of and feel you are concerned about their safety in your facility.”

For the rest of 2021, tourism growth will likely come mainly from regional visitors, and wine country destinations in rural areas will likely benefit the most. Bratton said international travel may not get back to normal until next year and business or conference travel remains minimal as most Americans have little interest in spending time in conference centers located in dense metro areas. He said most conference organizers aren’t planning any events until much later this year if at all.

Christian Miller, who is the owner of Full Glass Research and WMC’s director of research, said consumer sentiment on being comfortable going out to eat at restaurants has been steadily increasing since December.

WMC works with the survey firm Civic Science, which has regularly been asking consumers how they feel going to restaurants since April 2020. Throughout most of the pandemic the number of those willing to eat out now and those wanting to wait six months or more have both been around 30% to 40%. In January, however, the two trend lines started heading in opposite directions with those being comfortable at 60% and those wanting to wait six or more months falling to 15% by March 21.

Miller said another Civic Science poll on what consumers want to see from wineries before visiting them found 46% of the more than 2,500 adults who visit wineries wanted to see staff clean and air out hospitality areas between guests. Thirty one percent of those surveyed said they also wanted to see winery employees wearing masks and gloves while serving them and maintain safe distances between customers.

Dale Stratton, WMC president and analyst with the market research firm SipSource, said it was important for the wine industry not to get ahead of itself and continue to respect consumer sentiment when it comes to health and safety. “First and foremost, it’s the consumer in the end who decides what recovery looks like,” he said.

And according to SipSource, which tracks depletion data submitted by wholesalers, there’s still quite a way to go before on-premise gets back to normal, and some pre-pandemic challenges, such as the ongoing sales growth of liquor, are only looming larger.

04/06/20
Crisis Sales Surge is "Stunning" but Not Sustainable