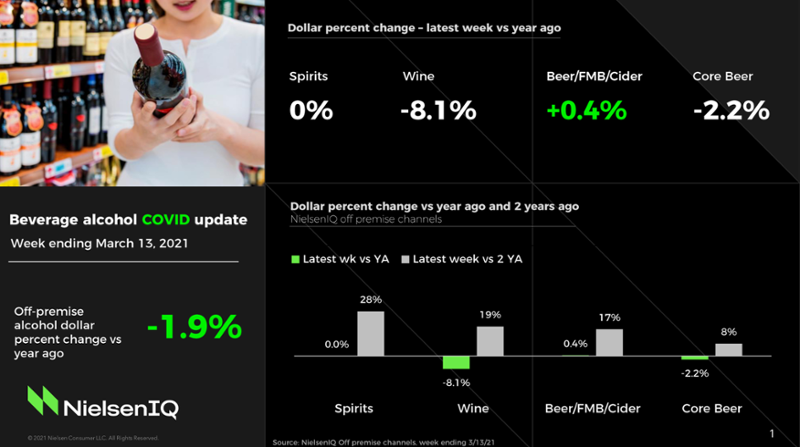 Unless otherwise noted, data and insights below are for the week ending March 13, 2021, compared to the same week last year in NielsenIQ off premise channels.

We have officially lapped one year of drastic shifts in consumer and shopper behaviors resulting from the pandemic in the U.S. At this time last year, alcohol volume experienced massive shifts from the on premise to off premise. As we lap those pantry-loading weeks, we are beginning to see the impact with very tough year ago comparisons. However, there are still some bright stars that are outpacing growth from even the biggest off premise weeks from last year.

For the latest week ending 3/13/21, total off premise alcohol dollar sales declined by 1.9%. Wine growth was -8.1% and spirits growth was flat (0%). Beer/FMB/cider was the surprise this week, with positive growth, up 0.4%. However, seltzers and FMBs drove most of that growth, with core beer (excluding seltzers, FMBs, and cider) down 2.2%. Seltzers alone shifted total off premise alcohol by a percentage point. If we were to remove seltzers from the scope, total alcohol would have been down 3% in NielsenIQ off premise channels.

As a comparison, total fast-moving consumer goods declined by 20.7% for the week ending March 13, far outpacing the slight declines for off premise alcohol. Another benchmark that we will be tracking is two-year ago comparisons for off premise alcohol. In this case, NielsenIQ off premise spirit dollars are up 28%, wine is up 19%, and beer/FMB/cider is up 17% compared to the same week in 2019. This all indicates that alcohol dollars are still far above off premise norms when comparing to years prior to the pandemic. However, as more states open up, we will begin to see these trends flatten in the off premise.

As Texas is one of the first large states to fully open up bars and restaurants and lift the mask mandate, we will be closely tracking off premise performance there over the next few weeks. For the week ending March 13 (3 days into the full opening) beer/FMB/cider sales were down 4.9% in Texas in off premise channels. While sales in Texas declined more than the total U.S. growth rates (+0.4%), declines in other large beer states were even greater, with Florida down 5.5% and Illinois down 8.8%. Sales for the latest week in Texas are in line with dollar sales for previous weeks (up 5.6% vs prior week, but we would expect a bump from St. Patrick’s Day). So far, we aren’t seeing massive shifts in volume away from the off premise, but that will likely change for the week ending March 20.

Seltzer growth was led by Truly, which was the #1 growth brand not only for seltzers, but also for the entire beer/FMB/cider category. Truly’s growth was driven by the lemonade and new iced tea seltzers, illustrating that innovation is just as important -- or even more important now than pre-pandemic time periods. Modelo Especial and Mich Ultra also were big growth drivers for the latest week.

Performance in the convenience channel is likely the most important factor that kept growth trends positive for beer/FMB/cider for the week of March 13, 2021 in NielsenIQ off premise channels. For this same week last year, the convenience channel was trailing growth rates of other channels, with c-store beer sales up 4.6% compared to grocery sales up 19.6%. In other words, year ago comps aren’t quite as high for beer in c-store compared to other channels. Given the overall size of beer in c-store, this is likely driving the positive trends for the category for the latest week. Dollar growth for beer/FMB/cider in c-stores is up 9.7%, compared to declines in the grocery channel (-3.1%) for the week ending March 13, 2021.

Last year, beer trends in the convenience channel were outpaced by growth in large-format stores for the first several months of the pandemic. When we lap those weeks in early June, when c-store sales began to pick up, we will begin to see more declines in beer for year ago comparisons.

With overall growth rates flat for spirits, some spirit categories are still growing by double or even triple growth rates, while others are declining by double digits in NielsenIQ off premise channels. We’ll start with the growth categories in spirits. Tequila is still a massive growth driver, up 31%. Ready-to-drink cocktails are up 147%, cognac up 26%, cordials 7%, and Japanese whisky up 23%. Total whiskey declined by 1.8%, with American whiskey down 2.5%. Vodka off premise dollar sales declined by 14% and gin is down by nearly 10%.

All price tiers in spirits declined compared to year ago, except for the ultra premium price tier, which grew by 16.5%, signaling continued premiumization in spirits in off premise channels.