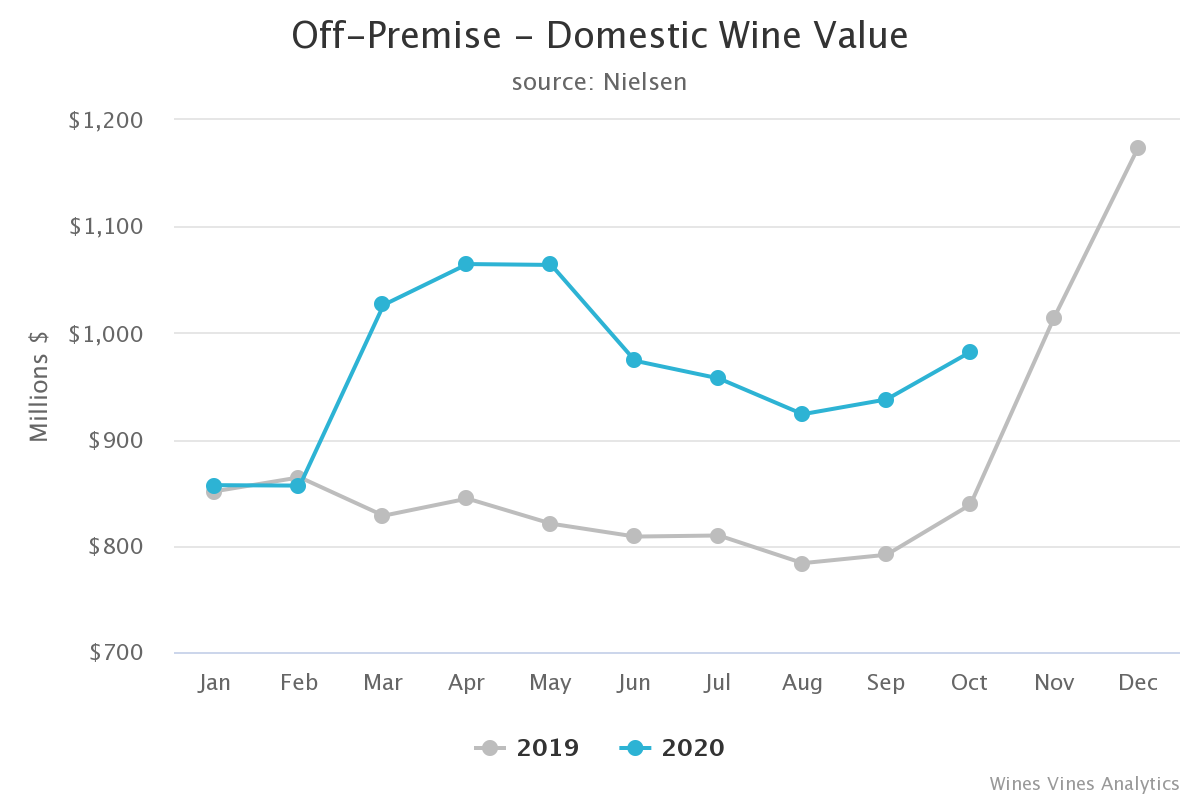 Domestic table and sparkling wine sales through Nielsen off-premise outlets rose 17% in the four weeks ended Oct. 31, totaling $982 million in the period. Table wine sales gained nearly 13% to $929 million while sparkling wines rose 23% for sales of $53 million. While the majority of sales occurred between $8 and $15 for table wines and $12 and $20 for sparkling wines, the fastest growth in both categories was logged by wines retailing for $20 a bottle and up.

Direct-to-consumer (DtC) shipments also increased, but at a slower rate than in recent months. Wines Vines Analytics/Sovos ShipCompliant reported that shipment value increased just 8% in October compared to last year, totaling $527 million. Case volumes increased 19% to 961,335, pointing to the growth of the channel by a broader selection of wines. Highlighting the dynamic, October shipments averaged $45.67 a bottle, the most expensive monthly average seen to date this year, but 9% below the average bottle price a year ago.

Some of the strongest growth through both Nielsen outlets and DtC was posted by red blends. Sales through Nielsen outlets increased nearly 17% in the 52 weeks ended Oct. 31 to $2.3 billion, while shipment value in the DtC channel increased 14% in the latest 12 months to $565 million. The off-premise and DtC shipment data are some of the Wine Industry Metrics reported each month in the Wine Analytics Report.

Studies of retail behavior in the November edition of the Wine Analytics Report indicate that up to a quarter of U.S. consumers have now bought wine online, either direct from wineries or from retailers. Data from Wines Vines Analytics/Sovos ShipCompliant suggest that the biggest gains for wineries may lie outside the traditional holiday seasons, periods in which wine club shipments typically did not occur.

However, the gains cannot mask the profound impact restrictions on restaurants have had over the past eight months. According to market research firm bw166, consumer spending on domestic wines, including bulk imports, fell 8% in the latest 12 months, thanks entirely to lower on-premise spending. Table wine sales dropped nearly 8% to $42.4 billion while sparkling wine sales declined 9% to $1.9 billion. All told, the total wine market in the U.S. was worth $67 billion in the latest 12 months, or 9% less than it was a year ago.

Winejobs.com’s Winery Job Index was down 45% from a year ago in October, closing the month at 147. All components of the index saw declines, led by a 68% decline versus last year in demand for sales and marketing positions. Nevertheless, demand for DtC positions remained comparatively strong. It represented the largest component of the overall index for the month of October, and the subindex for the category was six times that of April, when wineries were grappling with closures and the initial impact of the pandemic.