Will treatment before crush lower Guaiacol and 4-methylguaiacol levels?
by Cyril Penn
October 20, 2020

Ozone, long used in the wine industry as a sanitizing agent for the crush-pad, is also sometimes used to clean barrels, but few people are aware that ozone has also been used to treat grapes for making wines with less added SO2; or that ozone has been used to alleviate bacteria in vineyards that can lead to stuck fermentations. Winemakers who’ve dabbled with it say ozone treatments bring out fruit forward characteristics in finished wines. Now they’re experimenting to see if ozone treatments can be effective in cleaning smoke exposed grapes before they're vinified. 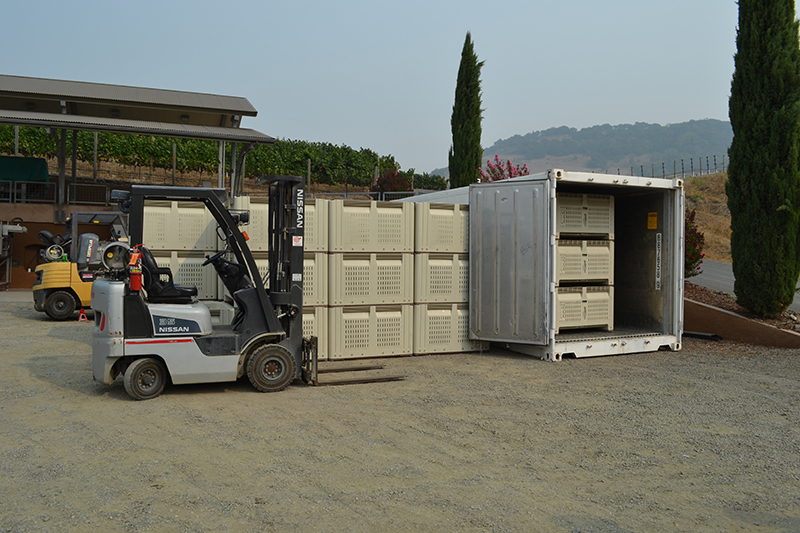 In the months leading up to the 2017 wine grape harvest, consulting winemaker Ken Bernards was set to experiment with ozone treatments prior to destemming to address an issue with a Cabernet vineyard. Open minded but skeptical, he’d tasted wines treated with ozone in trials conducted at a neighboring winery.

Steve Reynolds was using it for making low-sulfite wines.

When the Tubbs Fire broke out in Napa in October 2017, Bernards wanted to bring fruit in as quickly as possible. He contacted the company providing the process and equipment to cancel the experiment, but the vendor suggested ozone treatments might be helpful in mitigating would-be smoke taint, possibly destroying smoke taint-related molecules.

One experiment turned into a different experiment in 2017: Bernards said he ultimately saw Guaiacol molecules in treated Cabernet drop by roughly half. He ended up treating most remaining fruit at the very end of the 2017 vintage with ozone.

“We were shooting in the dark. We didn't have measurements as to how much ozone we were applying but it had a positive effect.” Bernards said. "The grapes produced resulting wines that were bottled, as intended, for high-end programs.”

Bernards didn’t have a controlled trial, per say, but did see and taste favorable results. Analytical comparisons showed higher anthocyanin and polymeric anthocyanin levels in most post-treated samples compared to pre-treated samples.

"We did have some smoke taint in the wines with ozone treatment but at the end of the day, we were able to mediate the smoke taint that was present in other ways.”

Fast forward to 2020 when the fire season came early – and a friend, a fruit importer who helped Bernards import fresh grapes from Burgundy years prior – connected him with Purfresh, a company suppling ozone-equipped refrigerated containers to international fruit suppliers. Fruit companies use the technology Purfresh supplies to remove pesticide residues and to extend the shelf life of avocados, blueberries, pineapples, and table grapes.

Purfresh delivered containers to Porter Family Vineyards, where wine grapes were treated starting on September 16. Porter Family Vineyards ran most of their 2020 grapes through the system and Bernards treated lots for other Napa-based wineries there too, hoping to generate as much data as possible. Some of the treated wines are already dry and Bernards has a bank of samples ready to be analyzed in coming months - but nothing conclusive from an analytical point of view, yet.

In so doing, the winery puts some actual specificity into the concept of clean wine, although the process isn't used on all of the fruit the winery harvests, by any means.

Deerfield Ranch also used ozone to treat smoke-exposed 2017 grapes.  Results of a trial presented during the 2018 Innovation & Quality Conference organized by Wine Business Monthly indicated no detectable evidence of smoke taint in treated lots versus a control. Levels of phenolics and antioxidants also increased. Fabio Mencarelli, a professor of postharvest technology of horticultural crops at the University of Tuscia in Italy who pioneered the Purovino process, was one of the presenters during a session at IQ in 2018 that featured top academics from around the world with expertise in smoke exposure and grapes.

Robert Rex continues to use ozone. He said winemakers aren't exactly sure what the ozone is doing to the compounds that cause smoke taint but that it seems to reduce the smoke levels.  He cautioned that sterlizing the fruit leaves it vulnerable to VA or spoilage from other oragnisms. "You have to start the fermentation right away because the fruit is now sterilized and is susceptible to spoilage," he said.

Rex said ozone is also really useful if you have damaged fruit from molds or mildews.

Rex cautioned that there's a level at which ozone doesn't work if grapes have a very high level of smoke taint. "We've seen smoke taint levels 10 to 20 times higher than the sensory threshold," he told WBM. "I think it can take out as much as three quarters of the smoke taint from the numbers we've gotten from testing but if you have 20 times the sensory level and remove three quarters, you still have too much left."

"It works to an extent, but it's not a silver bullet, but it's the best thing we've got," Rex said.

Steve Reynolds with Reynolds Family Winery presented results of a trial during the 2015 IQ Conference where he used ozone to treat 2013 Stags Leap Merlot and Cabernet bottled in January 2015. Results indicated the process allowed him to create a stable wine without added sulfites. Reynolds also concluded the wines were softer and showed more fruit expression.

Over at Pine Ridge, winemaker Michael Beaulac went in a different direction, using the Purovino process to get around a stuck fermentation problem caused by Lactobacillus kunkeei, also known as the “ferocious lactobacilli,” that was present in one particular vineyard. (Lactobacillus kunkeei was discovered by Dr. Linda Bisson of the University of California Davis Department of Viticulture and Enology, and was named for the late professor Ralph Kunkee). Beaulac conducted trials over three vintages and was able to mitigate the stuck fermentation problem using the ozone application. The vineyard has since been replanted. “It allowed us to prolong the life of the vineyard,” Beaulac told Wine Business Monthly.

Ozone treatment of grapes is approved by the FDA and does not degrade the fruit, according to Purfresh CEO Christian DeBlasio, who said results have shown “across-the-board improvements in smoke taint impact reduction and improved wine profile analyte measurements after ozone treatment.”

At Towle Wine Company, the new wine services venture in Sonoma Valley, Towle Merritt has signed a data sharing agreement with Purfresh, as has Quintessa, and is conducting microfermentations while pulling berry samples of treated and untreated Cabernet Sauvignon. He has two refrigerated containers deployed and plans a trial using two five-ton fermentation tanks to help the industry understand what is, and isn’t, possible. Though it’s late in the season, he has capacity for other wineries interested in using the process.

The system consists of a forced air chimney flow system with high air volume.  Bins the same size and dimensions of standard wine field harvest bins get shrink-wrapped. The difference with the bins is that there are slots on the sides and the bottoms.

Treatments take 24 hours and each refrigerated unit can treat 27 bins at a time. Future bin design changes could allow for more bins per trailer, as the bins are only two or three inches too long to fit side-by-side, double-wide, in a trailer.

The costs involved in treating grapes will vary depending on the size of the container, (deploying one can be $10,000, or $20,000) and the length of time of treatment. If one maximizes throughput that cost may be in a range of roughly $150 a ton.

“If you can take a 4-methylguaiacol level of four and make it a two, or take a 2.5 and make it a 1.25, with as much smoke as we’ve had, that puts you on the low end of the spectrum,” Merritt said.

“This is an interesting winemaking technique beyond (smoke exposure),” winemaker Joe Uhr with Towle Wine Company told WBM. "We’re able to chill our fruit and then basically sterilize it. It’s a game changer in my opinion, even in a normal year.”

Bernards made a couple preliminary observations about wines he treated in 2020 though it’s still very early.

First, he’s not seeing much “smoke taint” in wines that were harvested prior to the Glass Fire that are from the Coombsville area or from Carneros. Second, treated and untreated lots from two areas that saw significant smoke - Atlas Peak and Mount Veeder – are now dry: Bernards says it appears there was some effective mediation of smoke taint in those lots but it also appears there's still a small amount in treated samples.

“It looks like we're doing some good but there’s a lot of noise and the wines just went dry within the last day,” Bernards said.

Bernards is expecting to see more changes in the 2020 treated and untreated wines later because smoke taint molecules can become unbound after malolactic fermentation. Bernards said he's consistently seeing the ozone treatments result in less tannic, more fruit forward, and softer wines, which can be perceived as either positive or negative for a given winemaker, depending on stylistic preferences.

“The best thing the wine industry can do is keep an open mind to any tools that can help us through this,” he said. “This may not be a cure-all, but may be the step that gets us closer to where we need to be in terms of having the least negative impact on the wine and highest potential quality.”

Look for our latest report on technologies being used for smoke taint mitigation with a look at various proprietary systems and behind the scenes machinations in the December Wine Business Monthly.

A one-of-a-kind forum for ultra-premium wineries focused on innovations that advance wine quality. This event is produced by Wine Business Monthly. New date and location in 2020 (February 27 at CIA@Greystone). learn more

PC Engineering Srl tested and patented Purovino®, a method of producing wines without added sulfites, with a particular focus on environmental sustainability.