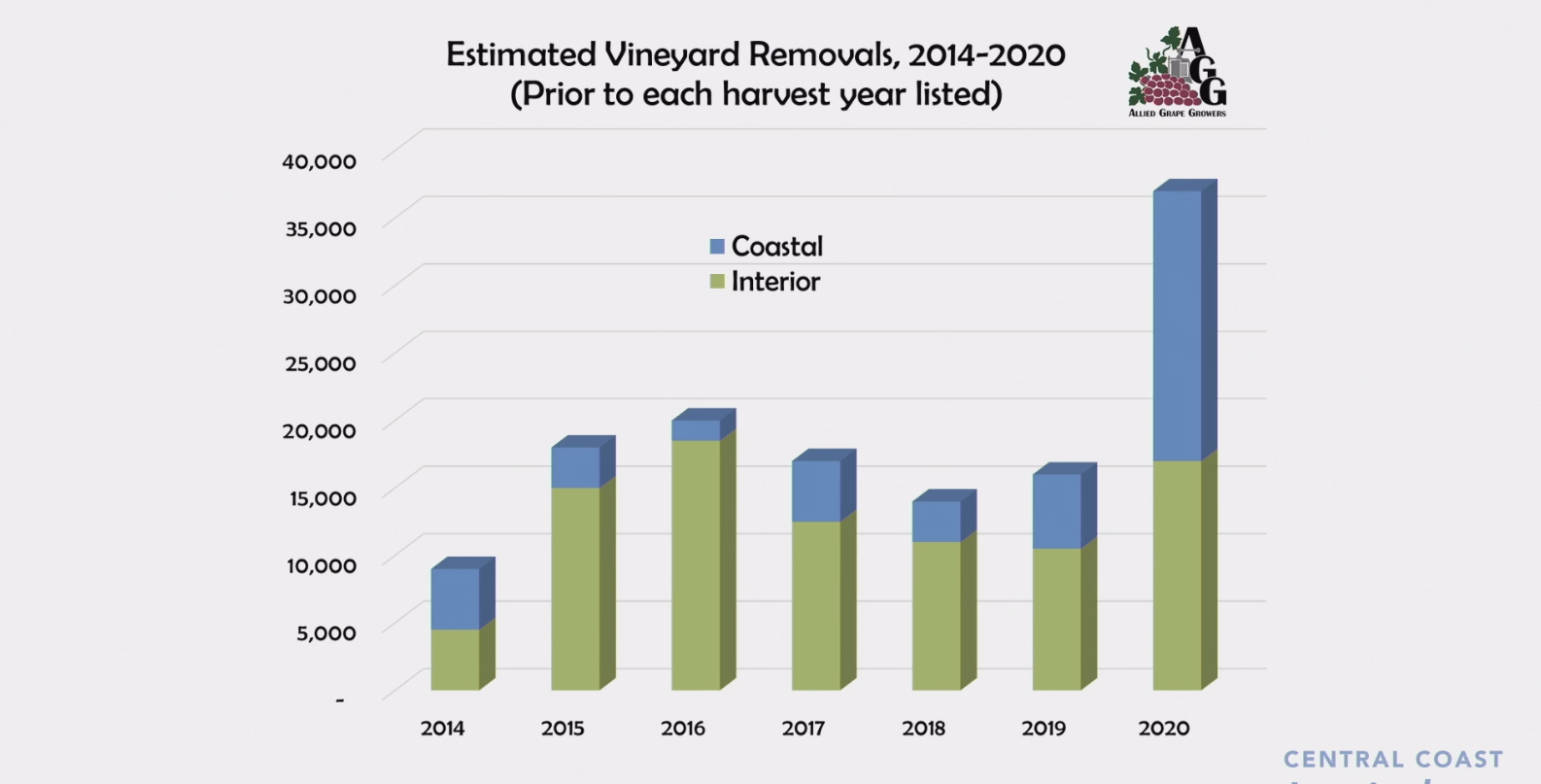 An estimated 35,000 vineyard acres have since been removed because of the acute oversupply, but the industry is still only half way toward the goal Bitter outlined during Unified of reaching a target bearing acreage range of between 540,000 and 560,000 acres.

“We haven’t corrected our overall supply situation in one year just by removing 35,000 acres,” he said.

Bitter was speaking during the first day of Central Coast Insights. Day two of the conference will be held today. 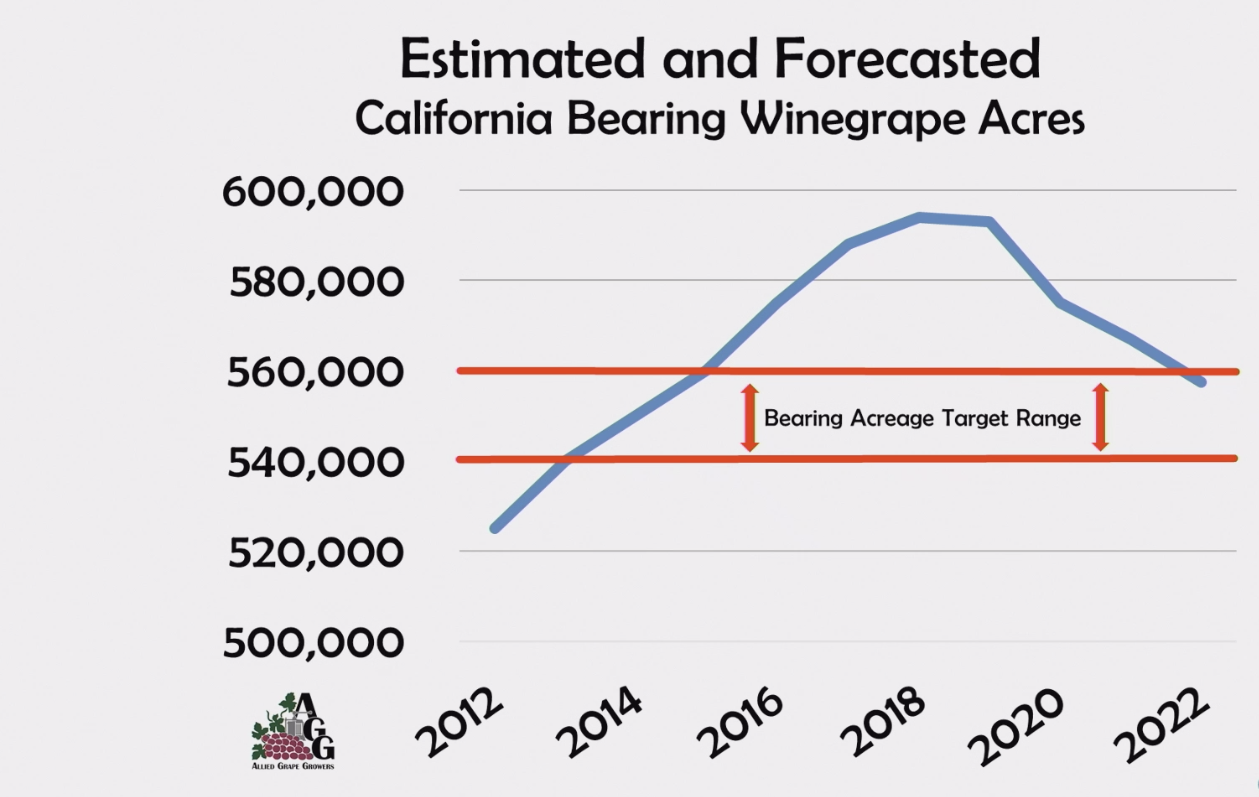 On the north coast, about 5 percent of bearing acreage was abandoned following the 2019 harvest, not necessarily removed, most of those vineyards are being redeveloped.

The Central Coast has seen the most removals, with the region reducing total acres by 15% with landowners opting to replant or replace vineyards with vegetables or citrus orchards. Winery-owned vineyards in the Central Coast will be replanted but there’s not much replanting of grower-owned vineyards occurring - some of that acreage is being planted to other crops. In the interior regions, growers replaced 4% to 5% of bearing acreage with orchard crops.

Central Coast growers have yet to see prices needed to match their costs of farming.

In a sign of the times, Bitter said removals in interior regions stopped as the largest wineries experienced intense demand for grocery store brands. He said a couple of months after the lockdown orders, there was an “exponential” increase in demand for grapes to support such brands and growers have received multi-year contracts and other incentives to keep their vines in the ground.

Bitter said the crop could reach four million tons this year but might not because it appears to be light, so far, state-wide.

He said there are questions about whether or not every grape out there will make it to bottle this year with wildfires burning throughout much of the state,. “The total amount of production is questionable for this year,” he said.

Bitter said some wineries that were selling took bulk wine off the market in case of problems because of the fires.

He said the fires and potential smoke contamination fueled interest in 2019 bulk wine as wineries begin to think what their “plan B” is to the extent that significant portions of their supply have been exposed to heavy smoke.

“It remains to be seen but we have seen an immediate response by buyers to look at 2019 bulk wine already, he said. People are looking to hedge in case there are problems with 2020 wines."

Bitter cautioned it's early to jump to conclusions about smoke exposure.

In addition to his work at AGG, Bitter is a vineyard owner and said regular tests of his grapes have revealed no contamination compounds. That likely may be because much of the smoke drifting through the state is high enough in the air not to cause damage. Vineyards much closer to fires are at a higher risk of contamination.

“We need to be careful as an industry about making too big of a deal about the extent of potential damage. There’s a lot of tests we’re taking preliminarily in our vineyards and they’re not showing high levels of glycol or 4-methylguaiacol. Part of the reason could be that smoke the grapes may have been exposed to is upper-level atmospheric-smoke that traveled a long way from the original source."

“There’s some science out there that says that just because there’s smoke doesn’t mean that there’s taint. If you’re right next to the fire and it’s going right down into your vineyard, you’re probably much more susceptible than if the smoke has been up in the atmosphere for a while before settling down."

"There’s lots we need to learn and we need to be careful about going too-far too-fast with concerns about some major catastrophic event for the 2020 harvest season.”

Goebel, who handles bulk transactions, said what had seemed to be a stabilizing market has become much less so because of smoke concerns. Prior to the fires, the market had mainly been driven by negotiants, DtC programs and other players such as online wine clubs. “There was lots of opportunity and those buyers weren’t feeling a lot of urgency.”

Discussing the major varieties in turn, Cooper said Pinot Noir still appears to be in oversupply and she said expectations for increased demand in coming years should be tempered as there are more acres coming online.

Goebel said demand hasn’t really taken off for bulk Pinot but that could soon change once the extent of fire impacts are known. A significant amount of what could be available is also winery owned meaning inventories could decline if wineries need to offset losses from 2020.

While Goebel said he was busy and there was a lot wine moving, no wine is unavailable or super tight. And even if there are some “knee-jerk” reactions when it comes to Pinot Noir and smoke risk, he “wouldn’t be surprised to see those gallons come back onto the market.”

The excess of Cabernet Sauvignon has been particularly challenging for growers in Paso Robles, Calif., but Cooper said demand for Cab to support California appellation or other value wines has kept the market moving. She said between 6,000 and 10,000 tons of Paso Cabernet grapes has left the market for those types of wines.

She said Chardonnay appeared to be in better balance at the start of the year, but every time Cooper expected demand to pick up it hasn’t. She saw demand for premium Chardonnay slow in the spring and through the summer inventories continued to remain out of balance. “That market has cleaned up some but there’s still a lot of availability and opportunity,” she said.

Both Cooper and Goebel said they’re seeing price compression for all varieties. While the bottom of the market may increase through the rest of the year by as much as 50% or more, they did not expect to see the high end of the market increase much at all. Lower priced and California appellation wines will likely remain the driver of the market until the pandemic is over and the premium market starts to return. Cooper said the most recent similar market is 2009 when the industry felt the effects of the Great Recession.

She added that growers facing contract cancellations try and keep a cool head and keep their relationships in perspective for future harvests as most wineries are struggling as well. “I know that is very difficult in trying times like this,” she said. “We’re all under a tremendous amount of stress.” 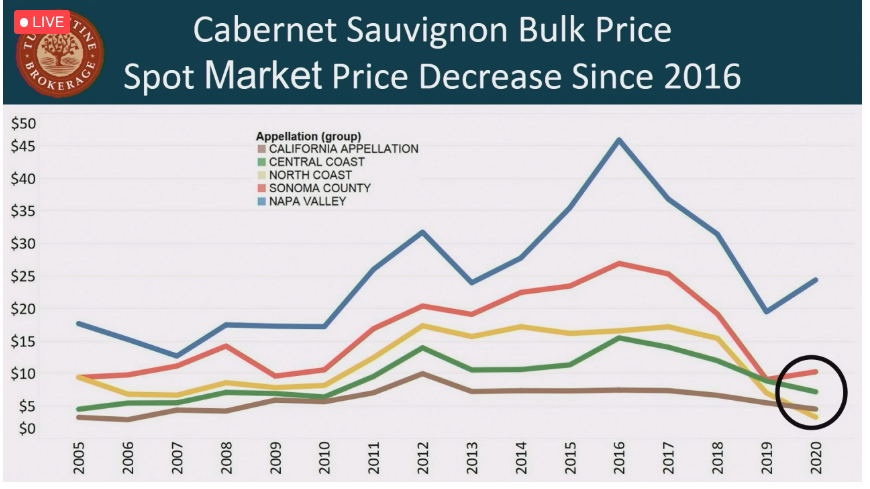 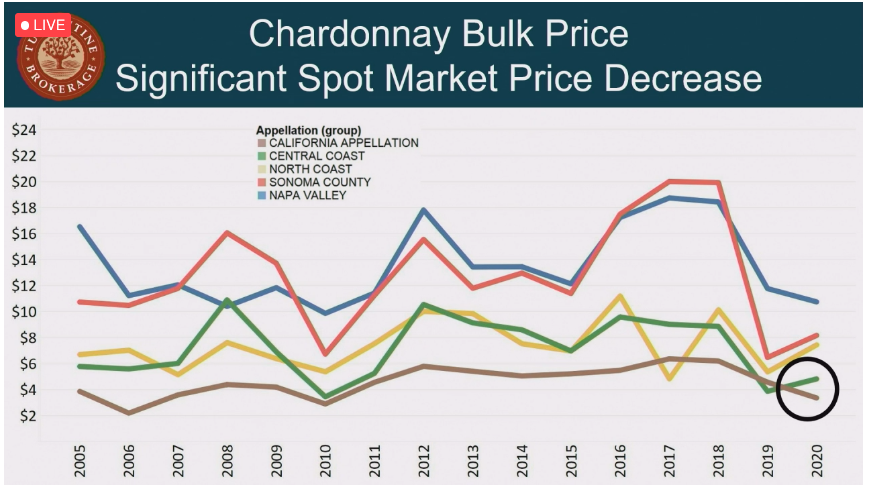