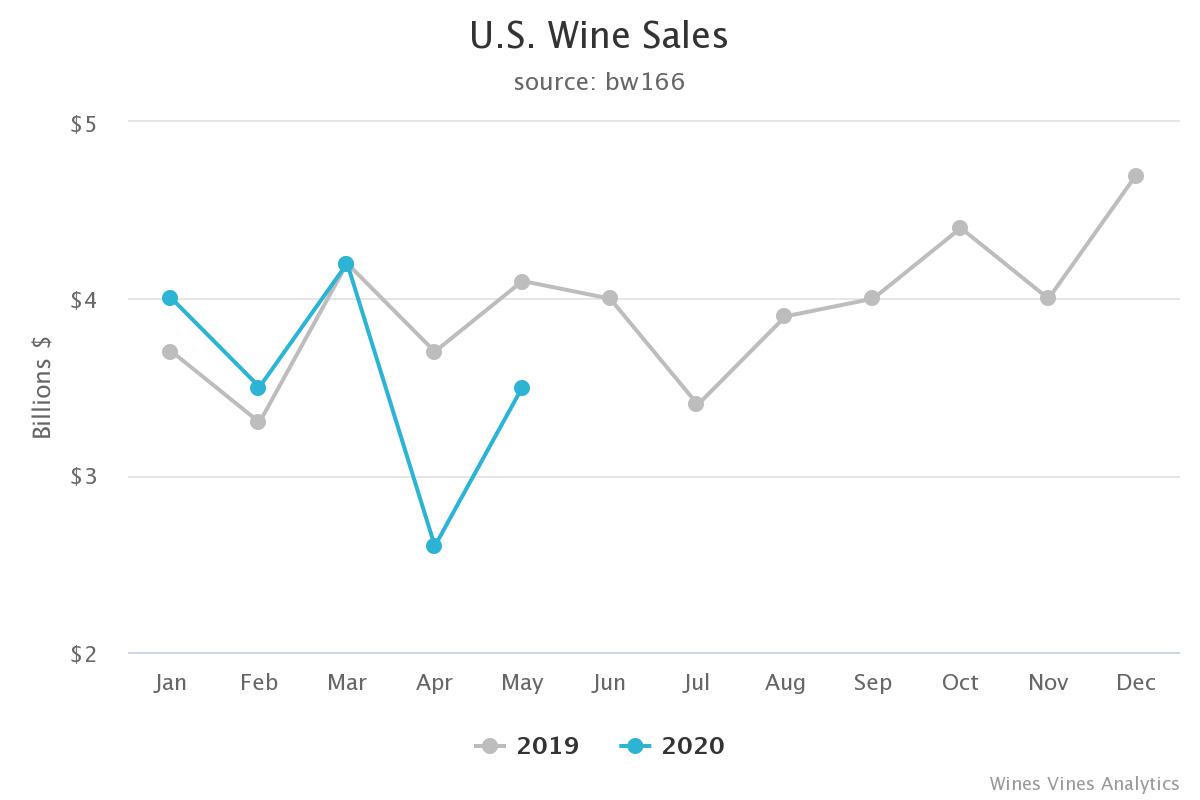 Sonoma, Calif. – Consumer spending on wine remained strong in May as a clearer picture emerged of how the closure of tasting rooms and on-premise accounts as a result of COVID-19 have impacted the total U.S. wine market.

While wine sales volume increased 1% in the 12 months ended May, consumer spending on domestic wine, including bulk imports, fell 4% by value to $48.4 billion in the same period.

The decline is primarily attributable to the closure of winery tasting rooms, bars and restaurants across the country. On-premise wine sales were down 89% both in value and volume in May, a minor improvement from the 90% decline reported in April.

While more and more premises are reopening, promising stronger numbers in June, significant declines from a year ago are expected for much of this year. “We will see improvements but come December we may still be looking at 50% declines versus prior years on a month to month basis,” bw166 managing partner Jon Moramarco said.

Three months of the pandemic also drove a 3% decline in the value of the total wine market, including imports, in the U.S. in the latest 12 months, which bw166 reported as $71.4 billion.

The closure of on-premise venues means that consumers have shifted their spending to off-premise outlets. Nielsen channels, which account for 23% of the value and 45% of the volume of wine sold off-premise, logged a 30% increase in domestic wine sales in the four weeks ended May 16. Table wines drove the increase, rising 28% to nearly $997 million while sparkling wines gained 27% to exceed $67 million.

Volumes increased nearly 24% during the period to nearly 11.5 million cases. The greater increase of value versus volume reflected consumer demand for wines in the $20-$24.99 price tier, which saw the strongest growth of any price band at Nielsen off-premise outlets. According to Nielsen senior vice-president Danny Brager, who leads the firm’s beverage alcohol practice, consumer purchasing reflects a willingness to spend more at home in lieu of on-premise spending.

The same can’t be said of direct-to-consumer activity, however. Shipments through the channel remain high, growing 22% in May versus a year earlier to approach $303 million. The data from Wines Vines Analytics/Sovos ShipCompliant indicate that shipment volumes increased at twice the pace, rising 44% during the period. This was the third straight month that growth in volume exceeded value, resulting in the average bottle price of shipments falling 16% versus a year ago to $30.53.

There are signs that trends seen since the pandemic began are moderating, however. Off-premise sales are stabilizing, and overall DtC shipment data indicates a narrower spread between growth in value and volume. Hiring is also beginning to rebound, driven by preparations for the coming harvest.

Winejobs.com’s Winery Job Index stood at 272 in May, down 53% from a year ago. Weaker demand for sales and marketing staff as well as direct-to-consumer positions, including tasting room and retail staff, drove the decline. Production roles and vineyard labor remained the most resilient job categories, with demand down just 32% and 49%, respectively.

While the Winery Job Index reported year-to-date hiring down 40% from a year ago, demand has picked up steadily since late March. Hiring activity was the strongest in three months as June began, sitting 82% above a month earlier and more 385% above its nadir in March.

Data on the total U.S. wine market, off-premise sales, DtC shipments and winery hiring activity are some of the Wine Industry Metrics reported each month in the Wine Analytics Report www.wineanalyticsreport.com. The June issue of the report also covers the global wine market, which has been disrupted by the COVID-19 pandemic as much as the domestic one.