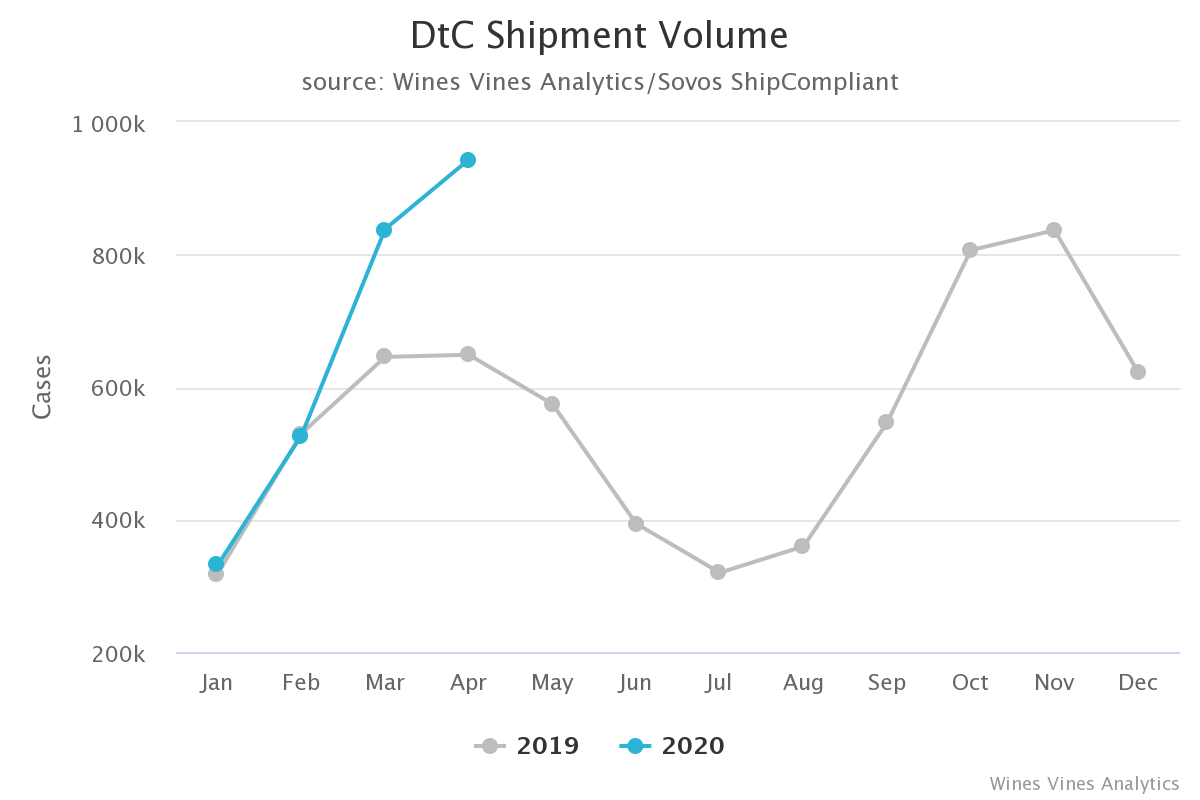 Sonoma, Calif.—The ongoing closure of tasting rooms and restaurants under restrictions related to COVID-19 delivered a hit to consumer expenditures on wine in April, but off-premise and direct-to-consumer (DtC) activity shows encouraging trends.

Moramarco’s modelling indicates that winery tasting rooms are recouping about 10% of sales in the face of government-mandated closures, even though April saw them effectively shut down to walk-in traffic.

“The reality is 100% of the tasting room business has gone away but wineries are recovering about 10% of that through online orders, reaching out to prior visitors,” he said in discussing the impact of COVID-19 recently. “Shipments from wineries have increased, and it appears to be due to more activity of wineries reaching out to prior visitors and doing more business over the Internet versus out of their tasting rooms.”

This is reflected in a sustained surge in DtC shipments, as reported by Wines Vines Analytics/Sovos ShipCompliant and featured in the May issue of the Wine Analytics Report www.wineanalyticsreport.com

Direct-to-consumer (DtC) shipment value increased 15% in April versus a year ago, totaling more than $372 million. This followed on an 18% increase in value in March. Volumes staged even faster growth in April, rising 45% to an all-time high of 943,326 cases. Growing use of the channel for more than just wine club shipments is seen by the dramatic increase in volume, which has led to a lower average bottle price for wines shipped. The average in April was $32.91 per bottle, down more than 21% from a year ago.

Meanwhile, sales of domestic table and sparkling wines through Nielsen off-premise outlets surged 26% to more than $1 billion in the four weeks ended Apr. 18. Table wine sales drove the increase by virtue of their size, gaining 25% to more than $1 billion but sparkling wines posted stronger growth at 27% to total $58 million. The figures reflected a full four weeks of pandemic spending, unlike last month which included just 10 days’ worth of spending after the pandemic was declared.

Volumes increased nearly 24% during the period to 11.7 million cases, showing that consumers continued to be comfortable spending a bit more per bottle while in isolation. Premiumization seemed to be surviving the pandemic unscathed, a phenomenon borne out by a Nielsen analysis of the top 100 wine SKUs sold through Nielsen channels.

“Over 90% of those items were selling at a higher price in the four weeks ending Apr. 18 than they were a year ago,” reported Danny Brager, senior vice president of Nielsen’s beverage alcohol practice, adding that about 75% of SKUs were priced higher than in the 4 weeks ended Feb. 29.

The top-selling wine brands during the pandemic included Barefoot, Woodbridge and Franzia, Nielsen reported, followed by box brand Bota and Josh. Barefoot showed exceptional strength during the pandemic, posting the strongest growth in absolute dollar terms to displace Josh as the fastest-growing brand.

The strength of sales did not mute the damage to winery employment, however. Hiring activity fell 71% in April, with Winejobs.com’s Winery Job Index sitting at 171 for the month. This was the weakest reading since 2012.

DtC positions, including tasting room and retail staff bore the brunt of the decline, dropping 96% to an index reading of 40. Demand for sales and marketing positions also suffered a precipitous drop, falling 83% to an index level of 44. These are numbers for the month not seen since before 2007.