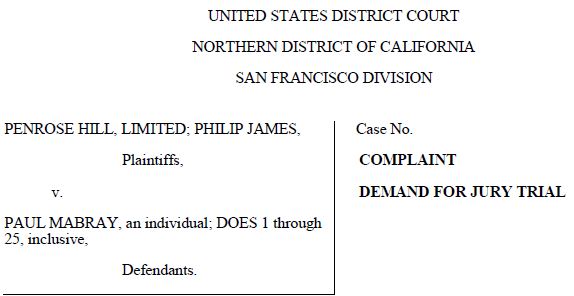 An online wine company and its founder have filed a defamation lawsuit for more than $1 million over a blog post, according to court records.

Paul Mabray on Friday said he had not heard about the lawsuit. “That’s news to me. I haven’t heard anything about that,” he said. “However, if it’s about my blog post, everything listed in the article is factual and indisputable,” he added.

In the post, Mabray described Penrose Hill and affiliates as “just shells on top of the one theme – taking plonk and repacking it,” according to the lawsuit.

The lawsuit cited other allegedly defamatory statements, including describing wine companies that are “creating false brands to fool unsophisticated customers,” according to the court filing.

Penrose Hill, which operates an online wine club called Firstleaf, claimed its portfolio of wines has won more than 1,000 awards since the company started in 2015.

The blog also accused James of the “egregious act of scraping Eric LeVine’s data from Cellartracker.com,” according to the lawsuit. However, that accusation is “false,” according to the court filing. James had “written permission from the owner to display the content,” the plaintiffs stated in their complaint.

“The blog post entitled ‘Fakers Not Makers and The Return of Philip James’ falsely imputes fraud and dishonesty” to Penrose Hill and James, according to the lawsuit. It “falsely imputes” upon the plaintiffs “a lack of fitness and lack of competence in the wine industry,” the plaintiffs also alleged in their complaint. “The blog post and defamatory statements,” the lawsuit continued, “have substantially damaged and continue to damage and disparage Plaintiffs’ business reputation.”

Penrose Hill stated in its lawsuit that its team includes three full-time “prominent winemakers” who have worked at “some of the most respected wineries around the world” including Wagner Family of Wine, Treasury Wine Estates, Pahlmeyer and Bryant Family Vineyards, according to the complaint.

The lawsuit seeks damages “believed to exceed” $1 million; the plaintiffs also seek to have the blog post removed and have Mabray issue a public apology on Medium and Twitter “recanting the defamatory statements, according to the complaint.

Mabray guest lectures about social media and marketing and is CEO of Emetry, which produces analytics software for the wine industry.

Penrose Hill is based in New York, according to the lawsuit. It also lists a Napa address on its web site.