California Crushed About 3.9 Million Tons of Winegrapes in 2019

Turrentine Brokerage cautioned that the tonnage and prices included in the 2019 grape crush report can be deceiving. The report does not include grapes left on the vine statewide as wineries face a glut of grapes from 2018 and a slowing customer demand for wine.

Allied Grape Growers president Jeff Bitter said the crush report confirmed that more grapes hung on the vine than previously estimated. Close to 200,000 tons could have been left behind – about twice as much as previously thought, he said.

Bitter last week said 30,000 acres of vines need to be pulled in order for the market to be in balance.

Ciatti Company noted that red wine grapes were down by 12.8 percent while white grapes declined by 4.3 percent, compared to 18. That indicates that such varieties as Cabernet Sauvignon, Pinot Noir and Zinfandel were the varietals left on the vine.

Again, numbers can be deceiving. Napa’s grapegrowers harvested 78,146 tons in 2019 – or 12 percent less than in 2018, according to Turrentine. However, that’s still the second biggest harvest after 2018, Fredricks said.

Audra Cooper, partner/grape broker at Turrentine, said the demand for Central Coast grapes hit an all-time low in 2020 due to “a structural oversupply across most growing regions and varieties.”

Many Central Coast grapes sold on the spot market in 2019 fetched lower prices than historical average prices, Cooper reported. In some cases, the grapes were sold below farming costs, she said.

Ciatti broker Todd Azevedo said the “overarching theme for the 2019 Central Coast harvest will be “what was left on the vine.’”

Bulk inventories remain high from the 2018 harvest, Azevedo said. A large portion of the market is still nervous about taking on more inventory, he said.

The Central Coast’s Cabernet Sauvignon, Chardonnay and Pinot Noir grapes account for 68 percent of the total crop, according to Azevedo.

Wine grape prices altogether declined by 7.8 percent, according to a Ciatti analysis. Pinot Noir’s crop totaled $440 million, according to Ciatti.’s analysis. However, prices were down 12.7 percent, a decline for two years in a row for one the state’s most popular variety. One question is whether Pinot Noir prices will continue to drop in 2020, he said.

Glenn Proctor, partner at Ciatti Company, said 2020 remains challenging as wineries continue to give notices to growers under contract.

The company has seen some activity on the bulk market over the past 4 to 6 weeks, Proctor said. Whether or not that translates in the grape market is unclear. The grape market has remained quiet, he said.

Both Turrentine Brokerage and Ciatti Company also cautioned that grape prices listed in the grape crush report do not reflect market dynamics.

“The spot market price in 2019 in some cases was $0 per ton due to the lack of demand,” Fredricks said.

Altogether, Cooper said the total value of the Central Coast crop decreased to $717 million – or 17 percent from 2018.

However, Bitter said the Napa prices listed in the crush report only increased because of pre-existing contracts; the prices for fruit left unharversted in 2019 were not included.

More fruit in Napa is still probably under contract than grapes grown in other regions, Bitter said. “As we move forward into the future, if the market remains weak, more and more Napa grapes may be out of contract and subject to spot market pricing, which would effectively lower averages,” Bitter added.

Statewide, the average price for a ton of Cabernet Sauvignon did not change, according to Turrentine’s and Ciatti’s analysis. However, the costs per ton for most popular varieties decreased.

The full report is available at: https://bit.ly/2UBQ43P 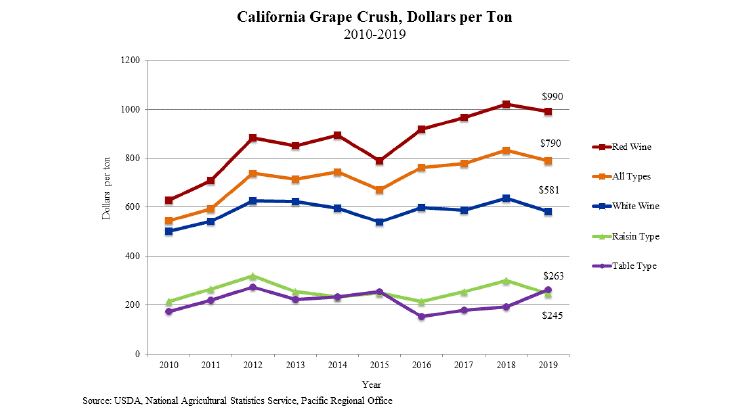