California growers left fruit unpicked in 2019 up and down the state as winery tanks remained full with unsold wine.

Some Central Valley growers went so far as to machine-harvest fruit, with the machines spitting berries back to the ground instead of into a gondola and headed for a winery. In other times, the fruit would have been sold on the surplus market for production of brandy or concentrate. These markets were full this year and could not accept the excess fruit.

“I’ve been doing this for well over 20 years and I can honestly say we don’t see these kind of pictures very often in the industry. We are in a unique position right now, and not a favorable one,” Jeff Bitter, president of Allied Grape Growers, said Wednesday during the 2020 Unified Wine & Grape Symposium Wednesday keynote.

California is oversupplied by at least 30,000 acres of winegrapes, Bitter said. The state’s bearing acreage needs to be 560,000 acres or less, Bitter said during his presentation at Cal Expo in Sacramento, Calif.

About 30,000 acres of winegrapes need to be pulled statewide in order to have a balanced winegrape market, Bitter said. That’s on top of the planted acreage that needs to be ripped out annually due to attrition.

“We need to pull out some vines,” Bitter said. “It just has to happen.”

The 30,000 acres represent about 5 percent of the Golden State’s total acreage planted in grape vines, or 590,000 acres. Roughly 10 percent of the planted acres are non-bearing vines, Bitter noted. Vineyards that should be removed include sick and older, low-producing vineyards, Bitter said.

Growers have already been pulling out grapevices across the state. A significant amount of coastal acres – about 20,000 acres - are already expected to come out this year, from Santa Barbara to Mendocino County, Bitter said.

Reasons behind the wine market imbalance include a copious 2018 harvest, sluggish wine sales and increased competition from other beverage categories, speakers said this week at Unified Wine & Grape Symposium.

Bitter and Danny Brager, a senior vice president at Nielsen, were among the speakers at Wednesday’s State of the Industry, an annual event at the Unified Wine & Grape Symposium.

Per capita wine consumption remains flat and wine share of alcohol is down, Brager said, adding that the wine market has stalled in volume, according to Nielsen. Total wine sales grew by 1.1 percent in 2019, Brager said, citing bw166 figures.

Spirits are gaining share at the expense of the beer and wine categories, according to bw166, based on tax-paid data. Hard seltzer sales are approaching $1.6 billion, Brager said.

Despite Fewer Plantings, Still in Oversupply

Fewer vines went into the ground in 2019 than in 2018 in California. Still, about 19 million vines were sold in 2019, according to results from the Allied Grape Growers Nursery Survey that Bitter presented Wednesday.

About 64 percent of the vines were for red wine programs and 36 percent for white, according to the survey. About 85 percent of all new Cabernet Sauvignon and Pinot Noir vines were planted in the coastal regions. The majority of vines sold to Central Valley vineyards were for the production of Rosé wines and, statewide, about 7 percent of new vines were for the production of mid-, high- and luxury-priced Sauvignon Blanc wines. Pinot Grigio planting has all but stopped, Bitter said. Growers also preferred Muscat Canelli as a floral variety over Muscat Alexander.

Bitter also presented data for Washington and Oregon. Washington growers planted about 800,000 vines in 2019 – or about 750 acres, totalling about 60,000 acres.

However, growers continued to plant in Oregon, where 36,000 acres are planted to grapevines. Growers planted 1.4 million vines in 2019 – or about 1,100 acres – about the anticipated attrition rate. Most of that was Pinot Noir, Bitter said. “In fact, Oregon planted more Pinot Noir vines than Washington did all vines collectively,” Bitter said. 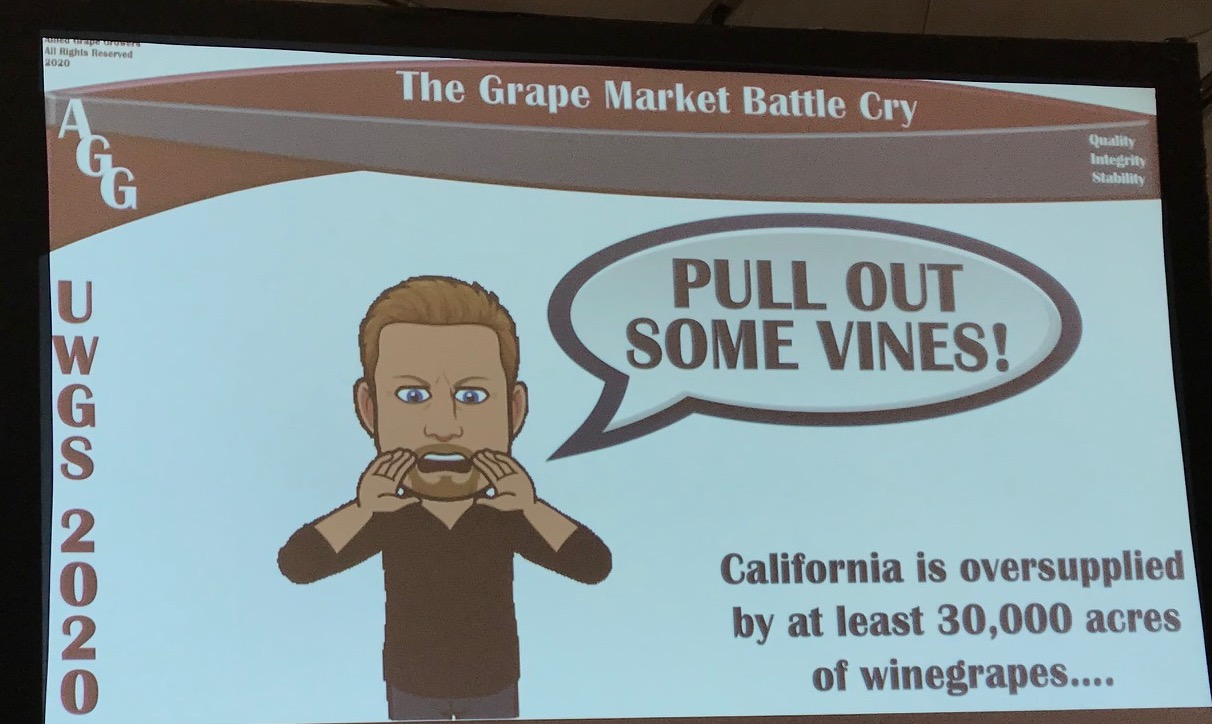 The Unified Wine & Grape Symposium started Tuesday and ends today in Sacramento. The nation’s largest wine industry trade show is hosted at Cal Expo this year and will continue at the location in 2021 while the Convention Center in downtown Sacramento is renovated and expanded. The Unified Wine & Grape Symposium is presented by the American Society for Enology and Viticulture and the California Association of Winegrape Growers.