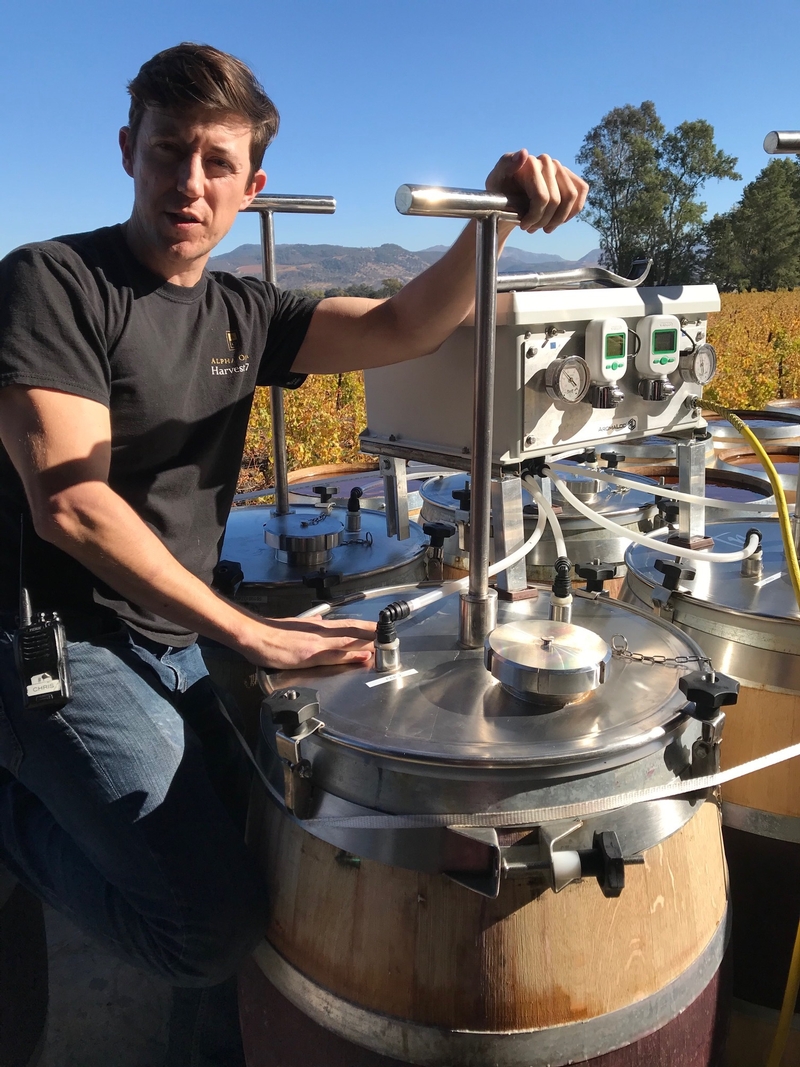 Chris Albin, research and development manager at Alpha Omega, demonstrates how to do a punch-down in a barrel equipped with the AromaLoc machine and sealed tight to re-capture aromas. Photo by Kerana Todorov/Wine Business Monthly

A new machine is now available to help winemakers retain the aromas that normally escape, along with carbon dioxide, during the winemaking process.

For the past two years, Alpha Omega Winery, known for barrel fermenting most of its wine production, has used a prototype from AromaLoc, a company based in British Columbia, Canada, to capture more aromas during active fermentations through crush.

“There is a noticeable difference in the aromatics of the wine,” Alpha Omega winemaker Henrik Poulsen said on Monday, adding that the wine may be used in high-end blends.

How it Works
The AromaLoc machine, placed on top of four French oak barrels, separates bubbling carbon dioxide from the other aromas. It then sends the aromas, including esters, thiols and volatile alcohol back into the headspace area in the barrels.

The headspace is saturated with these gases. That makes it very hard for the aromas in the wine produced to come out of solution. In the end, these aromas stay in the final wine, said Chris Albin, research and development manager at Alpha Omega.

The stainless steel barrel heads, which incorporate a hole to place a punch-down stick, allow the staff to do punch-downs without exposing the wine to the outside environment, thereby losing aroma particles in the process.

“It’s very difficult to have a tight seal,” Poulsen noted.

Alejandro Fantoni, a sales manager at TN Coopers, worked with Alpha Omega by email to improve last year’s design. A valve now allows the personnel to peak into the barrel to check on the must during punch-downs without having too many gases bubble into the atmosphere.

The AromaLoc concept first came from Richard “Dick” Jones, a retired Ph.D. scientist and hobbyist winemaker in Okanagan, British Columbia. Jones started developing the idea in 2012 in the after retiring from the University of Alberta, where he had conducted pulmonary research projects. Jones initially wanted to capture more aromas for his Pinot Gris production.

The system, which is usually fit on tanks instead of barrels, has been tested on wine, beer and cider fermentations. AromaLoc is now taking orders after seven years of research and development. The company plans to deliver its first machines in 2020. 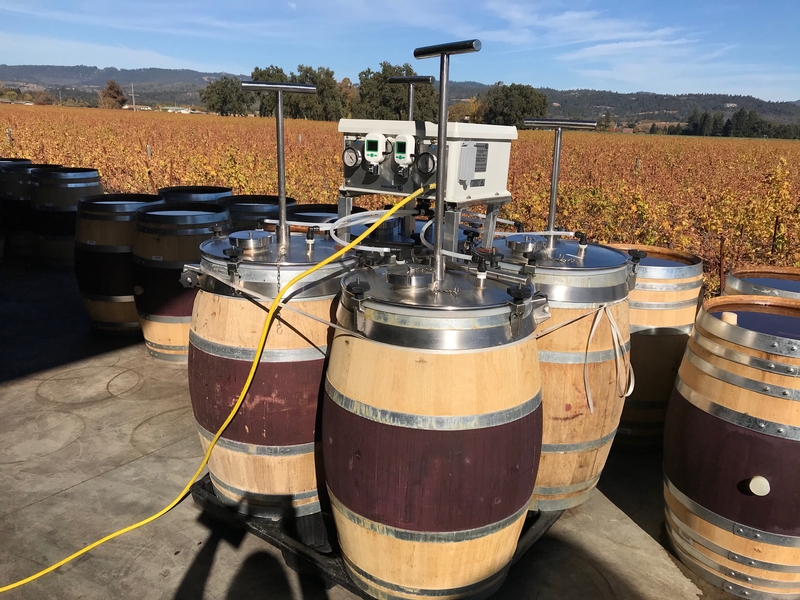 Malbec was fermenting Tuesday at Alpha Omega in barrels equipped with an AromaLoc machine. The seal was designed by barrel producer TN Coopers of Chile. Photo by Kerana Todorov/Wine Business Monthly