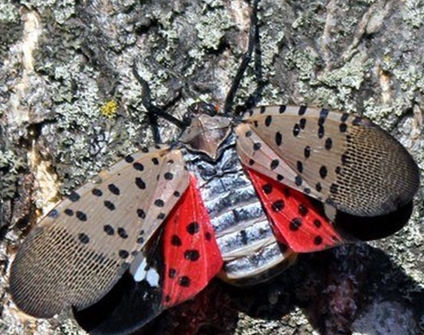 California Department of Food and Agriculture (CDFA) inspectors have reported to date finding a total of 11 dead spotted lanternflies this year on cargo planes arriving at California airports in Sacramento, Stockton and Ontario.

The flights originated from an airport in Allentown, Pennsylvania, located in Lehigh County, one of 14 Pennsylvania counties infested and under quarantine for the spotted lanternfly (SLF).

The SLF, (Lycorma delicatula), is an invasive pest from Asia that presents a significant threat to the grape and wine industry.

To date it has caused the most damage in the U.S. in Pennsylvania. Based on a map showing known distribution of the SLF from the New York State Integrated Pest Management Program, as of September 30, 2019, counties are also under quarantine for SLF infestations in New Jersey, Delaware, Maryland and Virginia; and it has been detected in New York, Connecticut, and Massachusetts.

Although not currently a problem in California, the CDFA Pierce’s Disease (PD)/Glassy-Winged Sharpshooter (GWSS) Board’s Other Pest and Disease Designation Committee reviewed current status of the SLF at an October 14 committee meeting in Sacramento and recommended the Board designate the SLF as a pest of winegrapes.

The PD/GWSS Board has the ability to designate other pests and diseases of winegrapes for Board funding for research and education/outreach activities. CDFA staff has compiled information and plans to complete the checklist process required for SLF designation, with the recommendation to be included on the agenda for possible approval of the full Board at a November 13 meeting in Sacramento.

Designation as a pest by the PD Board does not obligate the Board to spend funds on a pest. But it is a required first step to give the Board authority to engage in outreach and education activities, which would likely be the initial response to the SLF, to be proactive to prevent it from becoming a problem in California.

CDFA PD Control Program statewide coordinator Roger Spencer noted that the Board’s outreach efforts in the past for GWSS and other insect pests have provided good results in alerting the public and agricultural community, who have responded by reporting insect finds and submitting samples for identification.

The SLF is native to Asia, found in China, India and Vietnam, and has become a serious pest of the grape industry in Korea. It is known to have over 70 different host plant species, including stone fruits, nut crops, and native and landscape trees. The invasive “tree of heaven,” (Ailanthus altissima) is a strongly preferred host that is common in California and found in other states. The SLF is a phloem feeder. It damages plants and vines by feeding on sap and weakening the plant. Feeding also leaves a sugary excrement of “honeydew” that leads to growth of sooty mold on grape vines. Feeding results in grape losses, although the SLF does not feed directly on the fruit.

The SLF was first reported in the U.S. in Berks County, Pennsylvania in 2014. It is suspected to have arrived in the U.S. from China in a shipment of decorative building stone infested with SLF eggs. It is considered a high risk pest due to its mobility, with eggs and adults posing the most risk for movement. SLF eggs can be deposited on a wide range of surfaces--plants, wood, stone, and metal, including potentially on railroad cars and vehicles.

In September, a cargo container ship arriving at the Port of Brooklyn in New York was placed under quarantine and subsequently treated after inspectors detected SLF egg masses. The ship had previously been docked and loaded with cargo at the Port of Philadelphia. The SLF’s proven ability to be transported long distances by normal trade and transportation activities make it a concern for grapegrowers nationwide.

CDFA has been informing and training county ag personnel involved with GWSS monitoring in California to identify SLF, as well as personnel at CDFA border inspection stations and ports of entry. CDFA has also sent personnel to Pennsylvania to learn more about the SLF and consult with researchers and ag officials.

Separately from the PD Board, CDFA earlier this year provided research funding through the Proactive IPM Solutions grant program for University of California entomologists Dr. Kent Daane and Dr. Mark Hoddle to investigate SLF biocontrol options such as a predatory wasp native to China.

The dead SLF specimens found on the cargo planes at California airports this summer and early fall were all adults. It is believed that they flew into the planes during loading activities at the airport in Allentown, PA and later died en route. The Allentown airport has since been treated to reduce and control SLF populations at the facility.

According to Spencer, the 11 dead SLF were found by CDFA inspectors who were conducting cargo inspections for Japanese beetles, however, that inspection program is now done for this season.