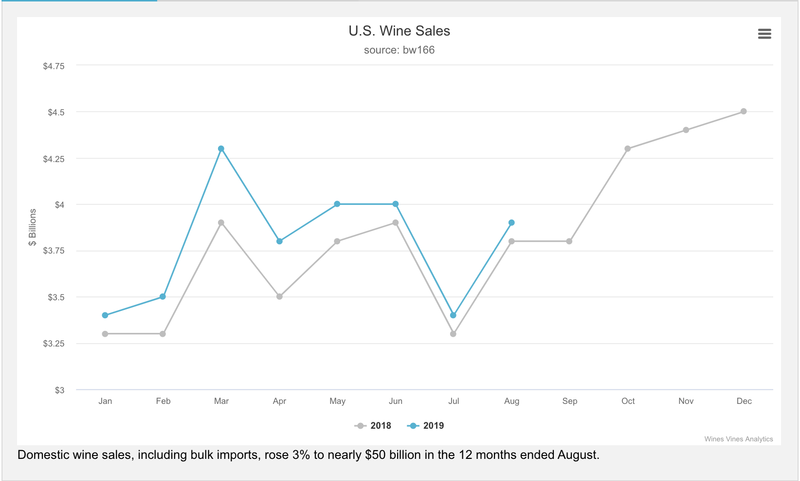 Sonoma, Calif. — The latest industry numbers point to a deceleration in U.S. wine sales, but that’s not to say opportunities don’t exist.

According to the latest Wine Industry Metrics in the September issue of the Wine Analytics Report released Monday, Sept. 16, sales growth is steady and stable. Market research firm bw166 reported that sales of domestic wines grew 3% to nearly $50 billion in the 12 months ended August.

The sum was arguably greater than the parts, however, as individual channels saw growth flatten. The month delivered no growth in off-premise sales, with Nielsen reporting $783 million through the outlets it tracks during the four weeks ended Aug. 10. Direct-to-consumer shipments also remained stable at $137 million. While case volumes rose 5%, this reduced the average bottle price and delivered a picture of a more cautious consumer. On-premise sales increased just 1% to $17.9 billion in the 52 weeks ended July 13, Nielsen CGA reported.

But a deeper dive into the numbers revealed some of the opportunities, which bw166 managing partner Jon Moramarco, who is also the editor of the Gomberg Fredrickson Report, said exist, even if they take some hard work to find. “It’s a more challenging market, but people are finding ways to win, by different manners, with different brands,” he said.

Domestic wines are doing well in the market as a whole, maintaining a commanding lead over packaged imports both in terms of market share and growth. Domestic wines hold 52% of the total U.S. market, notwithstanding growth in Sauvignon Blanc from New Zealand and sparkling wine from Italy. Domestic table wines in particular have led sales growth, rising 5% in the latest 12 months.

Nielsen data indicates that this wasn’t the case through off-premise accounts, where domestic sparkling wines had the upper hand in terms of growth, rising 4% in value versus stable demand for table wines. The average value of table wines increased, however, thanks to a decline in cases sold. A good example of the trend was Cabernet Sauvignon, the top-selling varietal sold through off-premise outlets.

Sales in the 52 weeks ended Aug. 10 increased 3% to $2.65 billion versus growth last year of 4%. The slower growth combined with flat growth in case volumes to boost the average price of a bottle 3% to $8.98. Most of those bottles clearly aren’t top-tier offerings from such places as Napa County, underscoring the fact that the premiumization is taking place alongside robust sales of the cheaper offerings that represent the greater share of sales.

Cabernet Sauvignon has also underpinned DtC shipments, ranking as the most-valuable and fastest-growing of the major varietals. Sales in the last 12 months approached $912 million, up 12% from a year ago, giving the variety a 29% share of the channel. Drilling into bottle prices, those priced $100 and up account for 58% of the value, or $528 million — a 19% increase from last year, and a rate of growth stronger than any other price band. Wines priced below $39 also showed significant growth. Rising shipment values at the top and bottom ends of the channel, and a stable middle, point to a diversified consumer base and a continued willingness by key segments to spend.

Put simply, premiumization is creating opportunities for the industry despite stable or even lackluster growth in certain segments of the market. Creating well-crafted wines critical to delivering what consumers want.

With that in mind, hiring of winemaking and production staff drove the Winejobs.com Winery Job Index 6% higher in August to 311, setting a new benchmark for the month. The winemaking subindex rose 23%, offsetting a 22% drop in demand for vineyard labor as harvest got underway.

While hiring activity is down 2% this year to date, the Winery Job Index remains 4% above where it was two years ago, a sign that hiring has moderated in line with the industry as a whole rather than stalled.