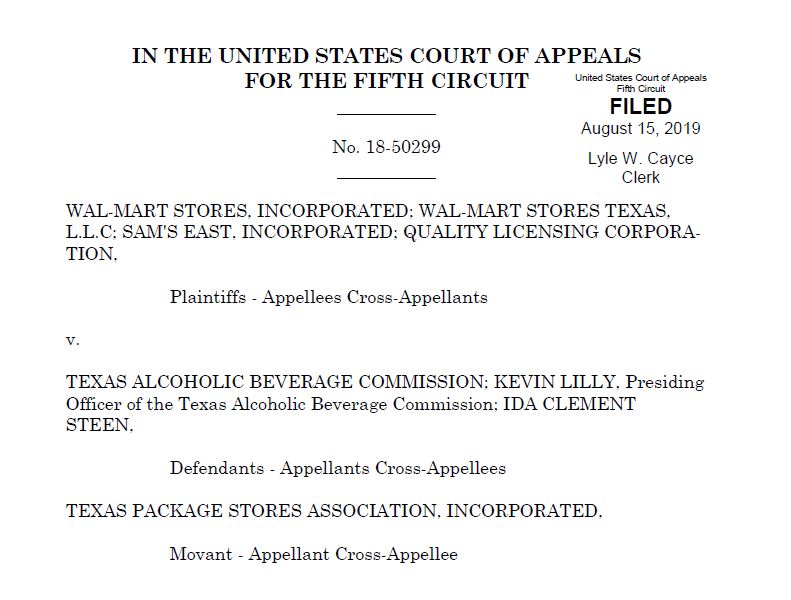 The U.S. Court of Appeals for the Fifth Circuit in New Orleans on Aug. 15 ruled that a Texas law barring publicly traded corporations with 35 or more owners from owning package store permits did not violate the dormant commerce clause and other laws. The appeals judges overruled a lower court decision that had concluded the Texas law was unconstitutional in the case pitching Wal-Mart against the Texas Alcoholic Beverage Commission and the Texas Package Stores Association.

The appeals court dismissed Wal-Mart’s arguments, including that the Texas law was discriminatory under this year’s U.S. Supreme Court decision known as Tennessee Wine & Spirits Retailers Association v. Thomas. In that case, the U.S. Supreme Court ruled that Tennessee’s residency requirements on liquor store owners seeking a license or renew a permit to operate a store in Tennessee was unconstitutional.

An attorney for Texas Package Stores Association wrote in a court filing that Wal-Mart’s arguments that it was discriminated under Tennessee Wine & Spirits Retailers Association v. Thomas “incorrect or misleading.”
The case dealt with a different set of issues, the attorney, G. Alan Waldrop of Terrill & Waldrop in Austin, told Wine Business Monthly Monday.

The appeals court remanded the matter to the lower courts to further reconsideration of whether the ban in Texas was “enacted with a discriminatory purpose.”

The case began in 2015 Wal-Mart sued the Texas Alcoholic Beverage Commission in January of that year over a Texas law that prohibits publicly traded corporations like Wal-Mart from obtaining permits to sell distilled spirits at its Walmart and Sam’s Club stores in the state. Walmart alleged the ban against publicly traded corporations owned by 35 or more individuals was unconstitutional, according to court filings.

Wal-Mart planned to build separate entrances at its stores for its distilled spirits and hard liquors departments in compliance with state and local rules. These departments would not be directly accessible from the main retail area and closed to unaccompanied minors, Wal-Mart stated in court records.

As of 2015, Wal-Mart sold wine and beer at 546 stores in Texas at Walmart stores, Supercenters, Sam’s Clubs and Neighborhood Markets. The Arkansas-based retailer was licensed to sell distilled spirits along with wine and beer in 25 other states, according to the 2015 complaint.