First Grapes of 2019 Harvested in Napa

The first truckload of fruit was picked early Tuesday south of Yountville and delivered a few hours later at Mumm Napa a few miles away, setting in gear the 2019 harvest in the Napa Valley.

“It feels like New Year’s Day,” she said. “It’s full of opportunity. You get to bring in this fruit and see how it transforms into wine. I love that every year is different. It never gets boring.”

The 2019 harvest started two days ahead of 2018, Lotz said. “We’re set for a quick pace this year, at least so far,” said Lotz, a UC Davis graduate, who was born and raised in Napa.

“Last year was a very large crop, larger than most of us had foreseen,” Lotz said with a laugh. This year, it rained during Memorial Day during bloom, resulting in smaller clusters than usual. “But farmers have done an excellent job. So the fruit quality is exciting and I think the acids are probably a little brighter than last year,” Lotz said.

The vineyard crews will return to Rodgers Vineyards Wednesday and Thursday to pick more Pinot Noir for Mumm. Mumm’s staff also anticipate to harvest fruit from other vineyards that sell fruit to the winery under long-term contracts.

Anna Hickey, a fifth-generation farmer in the Napa Valley, is chief executive officer and vineyard manager at Rodgers Vineyards, her family’s property. She also grows Chardonnay, Viognier, Merlot and Syrah on the 115 acres, 40 acres of which are contracted to Mumm. Hickey anticipates to be done with harvest in October.

Like other farmers, Hickey has had to navigate the weather this year, including dealing with rain on Memorial Day during bloom, making sure to stay on top of spraying sulfuring cycles, particularly during the early stages of fruit development. There was “tons of moisture on the ground,” said Hickey, who works with three full-time employees, three brothers. “We had high pressure from powdery mildew this year,” she said as she and her children, Brianna, 24, Nate, 20, and Ella, 20, waited by a scale to receive bins filled with fruit.

Reynolds Vineyards, a former dairy, has been planted in grapes since the late 1960s. The vineyard is not certified organic. “But we’re about as organic as you’re going to be,” said Hickey, whose great-great-grandfather settled in 1869 in Wild Horse Valley above the Napa Valley floor.

Rodgers Vineyards has worked with Mumm for about 20 years. It is tempting financially for farmers to plant Cabernet Sauvignon. People ask her why work for Mumm, given the price difference? “Why”? 20 years. They pay their bills. I feel like we’re part of the family,” Hickey said. “That means something that’s more tangible and sustainable over time,” Hickey said.

Hickey wants to farm for future generations, noting her children are the sixth-generation in the Napa Valley. “This is way more than just a beautiful fun thing that’s just really enticing. For us, it’s a way of life.”
Lotz, who remembered sampling fruit at Reynolds Vineyards in 2001 when she was an intern at Mumm, thanked her predecessor and mentor, longtime Mumm winemaker Ludovic Dervin. The 2019 harvest is her 18th at Mumm, Lotz said.

Dervin, who has taken over other responsibilities at the company, attended Tuesday’s harvest festivities at the winery. “I’ve worked so much learning alongside him all these years,” Lotz told about 100 employees gathered on the crush pad at Mumm Napa off the Silverado Trail. “I wouldn’t be standing here without your guidance and leadership,” she said after recognizing Dervin as he stood a few feet away. “And I want to thank you for that.” 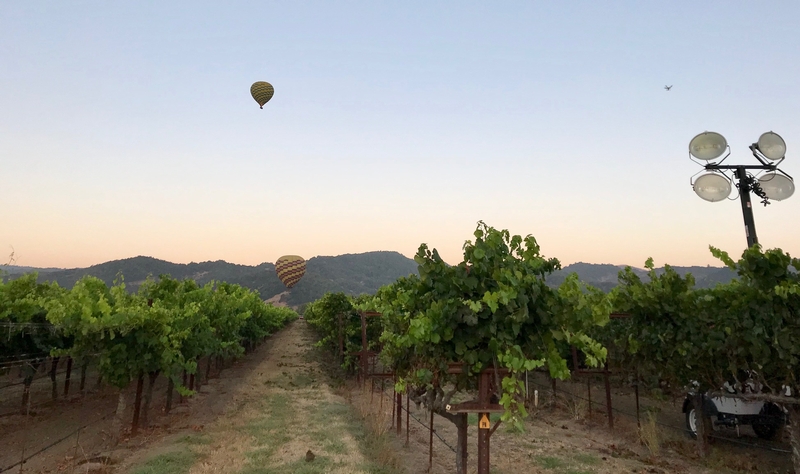