The overall tonnage increase was driven by higher yields in Napa, Sonoma and in the Central Coast,  and by by Cabernet Sauvignon, Chardonnay and Pinot Noir. Chardonnay was up 16 percent state-wide, while Cabernet was up 13 percent and Pinot Noir was up 19 percent.

“This shows there’s new plantings going into the ground and that we had a big year,” Glenn Proctor, a partner with The Ciatti Company said.

According to the report, Napa crushed 185,000 tons during 2018. Some 89,000 tons of this was Cabernet Sauvignon, compared to 66,000 tons reported crushed the previous year. Steve Fredricks with Turrentine Brokerage said the 22,000 ton increase equates to 1.5 million additional cases. While Napa has little, if any, room for new vineyard acreage, the increase is attributed to vineyards being redeveloped to Cabernet Sauvignon with higher density plantings and modern trellising systems that result in larger yields. Higher yields were also attributed to higher cluster weights in 2018.

Average prices for Sonoma Pinot Noir (District 3) dropped by about $100 per ton, according to the report.

Spot market activity late in the season was a likely factor in the lower average prices.

In District 8, which includes San Luis Obispo and Santa Barbara Counties, total tonnage of all wine grapes was up five percent with 245,000 tons crushed.

The Lodi region also produced a record crop with 850,687 tons, an increase of 14 percent.

An Opportunity to Innovate

“If you start to look at it, we have some digesting to do in some of the premium areas of the market where the crop was very big and we’ve seen some case sales slowdowns,” he said. “That will continue to put pressure on those markets.”

“The challenge, when we look at prices, is you have to be cautious because they are a reflection of past markets,” Proctor said. “I don’t think they reflect current market conditions we find ourselves in today. As wineries release growers from vineyards and contracts, there will be more open fruit available in 2019. We continue to see potential pressure on pricing as we move into this year.”

“Certainly there’s an opportunity for people to come and do new things,” Fredricks said. “These are the times where innovation occurs. It’s good for existing wineries and negociants who have an opportunity to try new things or for those looking for an opportunity to expand. … Of course, it’s going to be competitive to do so.”

The traditional February release of the USDA’s official preliminary harvest figure, and the breakdown of that figure, was delayed by the 35-day government shutdown in December through January. Today's release combines the preliminary and final reports.

The report is available at: www.nass.usda.gov/ca 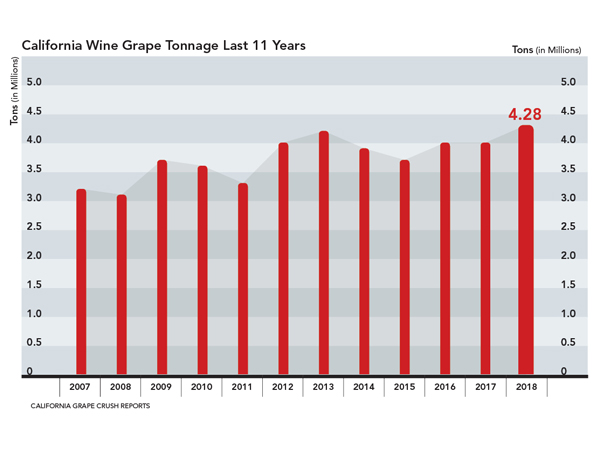