Sacramento, Calif. – Amid a decelerating wine sales environment, The Nielsen Co. reminded wine industry members at last week’s Unified Wine & Grape Symposium that the American market “is still the envy of the world, and it’s something we should be proud of.” 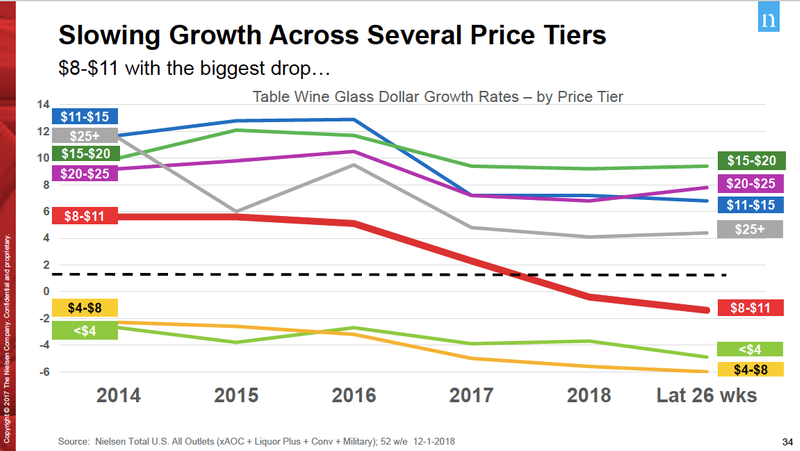 Brager announced that the gold medal companies in Nielsen’s “Best of the Best for 2018” analysis were three based in the U.S.: Delicato Family Vineyards, Riboli Family Wines and Precept Wine, all showing case volume gains of more than 100,000 cases and double-digit percentage gains in both cases and dollars. The silver medal winners, with more than 100,000-case growth but percentage gains not quite as large as the gold medal winners, were Deutsch Family and Jackson Family Wines.

Individual hot brands
The hottest individual domestic and import brands in the Nielsen data were those with the best year on year dollar increases. This list represents brands, not whole companies as above. See the parent company or importer affiliation in parentheses:

Nielsen measures a large portion of wine sales in the U.S. and Brager summarized the market’s performance in 2018 as one in which “rising tides lift all boats, but the tide is now receding. The tail winds are not as robust as in the past. Alcohol consumption long-term is flat and almost 50% of regular wine drinkers say they’re making efforts to reduce.”

The growth rate in dollars dipped to slightly above 2%, according to Nielsen, while volume growth was negative, meaning the number of cases sold shrank compared to 2017. Brager also showed more positive numbers from market research firm bw166, which reports on the entire U.S. market. Volume grew by 1.2% to nearly 410 million cases in bw166’s analysis.

Sizing Up the Competition
Competition from spirits, craft beer, non-alcohol beverages and increasingly from cannabis presents a challenge for wine producers, Brager said. “We’re in a war of market share. We’re in a battle for the hearts and minds and dollars of consumers.” 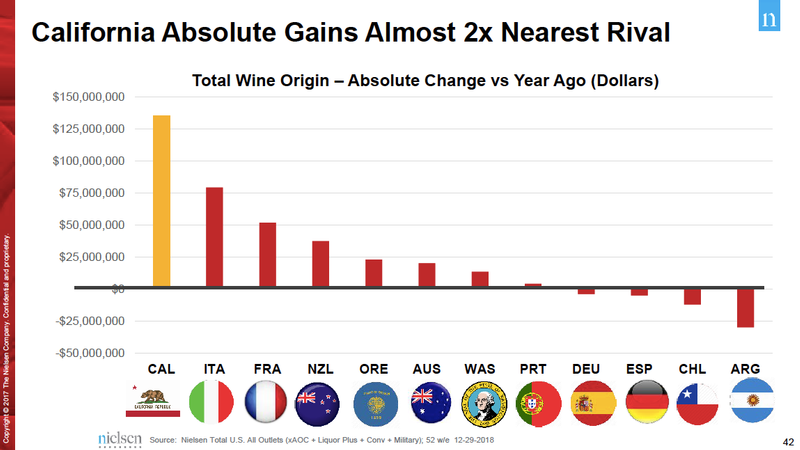 Brager said the premiumization trend in wine sales has continued as consumers trade up to more expensive wines while those under $11 per bottle are largely shrinking in sales. Red blends and Cabernet Sauvignon are big and getting bigger. Cabernet Sauvignon is poised to replace Chardonnay as the top-selling varietal in 2019, he said.

He urged wineries to not simply wait for demand to grow. “With wine growth slowing, we’ve got to fight for our share to stay healthy. We’ve got to innovate and give consumers what they want.”