Next to Luna is Mi Sueño Winery’s tasting room.

“It’s really cool,” said Jessica McLennan at Mi Sueño. She and husband José McLennan stopped there after tasting Pinot Grigio at Luna’s next door. “We’ve never heard of this place. And it’s really, really good.”
It was Jessica McLennan’s second trip to The Village since Vista Collina opened in August, noting it is only a $15 Uber ride from their Vallejo home. “Where else you can get all these tasting rooms together in this nice location?” 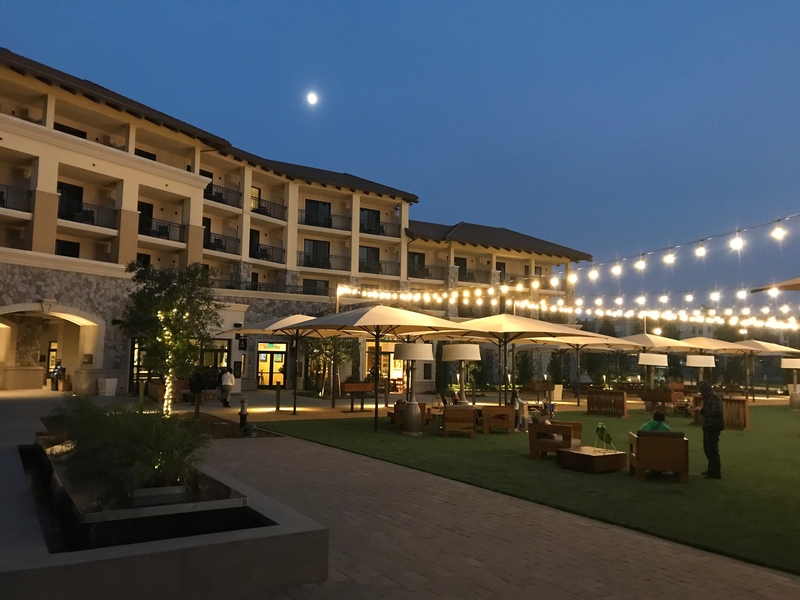 The tasting room is a short drive from Mi Sueño’s winery in an industrial building off the Napa-Vallejo Highway. Tastings are available at the winery Tuesday through Saturday and by appointment only. For more than 10 years, Mi Sueño’s owner had been looking to build a tasting room separate from its production facility, said Rolando Herrera, owner and winemaker.

“With the expansion of this new tasting room, we are now able to showcase our wines to a broader audience with walk-in tastings seven days a week, as well as still offering by-appointment tastings at the winery,” Herrera said in an email. “With regular resort events such as artisan markets, concerts, and more, we hope this beautiful locale becomes a regular gathering place for the community,” Herrera said.

Vista Collina, a hotel with 145 rooms and suites, is part of the Meritage Collection, a company owned by Irvine-based Pacific Hospitality Group. It was built on a 9.3-acre parcel across the street from the Meritage Resort and Spa which the group opened in 2006 near Gino Miles’ Giant Grape Crusher statue off Highway 29. Vino Bello Resort next door to Meritage is under different ownership.