Napa Valley, November 2017--WineAmerica, the National Organization of American Wineries, showed its support for the northern California wine industry with a “Winery Solidarity Tour” of several wineries, and also announced the organization’s future leadership, during its Fall Retreat in the Napa Valley.

On the afternoon of Thursday, November 9, roughly 25 WineAmerica Board members and other participants from numerous states broke into groups to visit the tasting rooms of five member wineries: Cakebread Cellars, Chateau Montelena, Freemark Abbey, Robert Mondavi Winery, and Robert Sinskey Vineyards. In addition, some out-of-state winery owners brought samples of their wines to offer as goodwill gifts to their California colleagues. 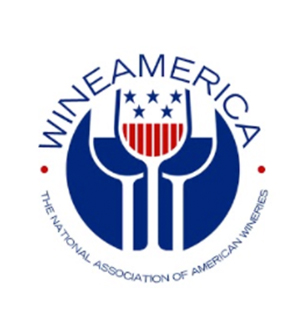 “After the tragic wildfires, we wanted to remind our colleagues in northern California that we are their neighbors even if we live a continent away, and that we’ve got their backs,” said WineAmerica President Jim Trezise. “It was also a great experience for our diverse group of Board members from around the country to experience this iconic region firsthand.”

WineAmerica member Treasury Wine Estates hosted that morning’s business meeting at the historic Beringer Winery, as well as a reception and elegant dinner that evening at the Hudson House on the property. At the meeting, the results of a recent election were announced, including the re-elections of Board members Michael Walker (Constellation Brands), Mario Mazza (Mazza Winery, Pennsylvania), Dana Huber (Huber Vineyards & Winery, Indiana), and the election of Katie Jackson (Jackson Family Wines, California) and Max McFarland, co-owner of Mac’s Creek Vineyard & Winery in Nebraska.

WineAmerica has hundreds of winery members from 42 states, so its Board is structured to ensure regionally diverse representation.

On a leadership level, as of WineAmerica’s February 20, 2018 meeting in Washington, DC, Marty Clubb (co-owner of L’Ecole No. 41 winery in Walla Walla, Washington) will become Chair of the Board, and Janie Brooks Heuck (co-owner of Brooks Wines in the Willamette Valley of Oregon) will become Vice Chair. Until that time, Trent Preszler (PhD, CEO of Bedell Cellars on Long Island) will remain Chair, with Marty Clubb remaining as Vice Chair and Janie Brooks Heuck as Secretary. All three of these wineries are widely recognized and respected for the superb quality of their wines.

Created in 1978 as the tiny, regional Association of American Vintners, WineAmerica is now the only national organization of American wineries, has hundreds of members in 42 states, and is widely respected and consulted by industry peers, media, and legislators. Washington-based Vice Presidents Tara Good and Michael Kaiser work with Meyers & Associates lobbyists Larry Meyers and Fran Boyd on issues critical to the American wine industry such as excise tax reduction, music licensing, immigration reform, trade policy, and funding for the Alcohol and Tobacco Tax and Trade Bureau, grape research, and export promotion.

In late September, Representative Mike Thompson from northern California wine country, co-founder and co-chair of the Congressional Wine Caucus, unveiled the first-ever national economic impact study of the American wine industry’s benefits to the American economy, which total $220 billion. WineAmerica sponsored that study, and the results are publicly available on both national and state levels at www.wineamerica.org/impact.