A Napa Valley winery is suing three former employees for allegedly deleting proprietary data after learning their boss was about to be fired, according to a civil complaint filed in Napa.

Peju Province Winery of Rutherford alleges its former human resources director, controller and chief information technology officer removed the confidential documents after they learned the winery was about to “terminate” their boss, then Peju president Abdullah Vural, according to the lawsuit.

Christy Patterson and Danielle Tipton, Peju’s former human resources director and chief IT officer respectively, resigned June 3, a day after Peju told Vural “that his employment would be terminated immediately,” according to the complaint.

The third defendant, David O’Neal, the controller, resigned June 8, according to the document. Vural, who is not named as a defendant, had hired Patterson, Tipton and O’Neal in October 2015, a month after he was hired as Peju president.

According to the complaint, Peju in May “made a decision to terminate the employment of Abdullah Vural.” Tony Peju, the winery’s owner and founder on May 26 “asked Mr. Vural to a meeting set for June 2, at about noon.”

Tipton, in particular, had “access to the e-mail communications” between its owners and its founder and “had advance notice of the decision to terminate Mr. Vural,” according to Peju’s complaint. Emails and other documents were allegedly archived and removed from company computers beginning May 31, according to the lawsuit.

Exactly how much information was removed is unclear. Peju’s attorney, Stephen Tedesco, declined to comment on the complaint.

Patterson, Tipton and O’Neal are being sued for computer fraud, “breach of duty of loyalty” and other allegations, according to the lawsuit filed July 21 in Napa County Superior Court.

Peju seeks an unspecified amount of money and a court order to prevent the disclosure of the Peju data, according to the document.

Peju is family owned. In 1982, Tony and Herta Peju purchased their first 30 acres of land in the Napa Valley, according to the company’s website. Their daughters, Lisa and Ariana, are also involved in the business.

Vural joined Peju after a 28-year career in the luxury hospitality industry, according to press accounts. According to the complaint, Vural was responsible for “developing a strategic plan to advance (the company’s) mission and objectives, overseeing all operations and promoting revenue, profitability, and growth, and was in charge of Peju operations and financial performance.”

During his tenure, the Peju family expanded its business, opening Liana Estates in 2016 at the site of the former Acacia Winery. 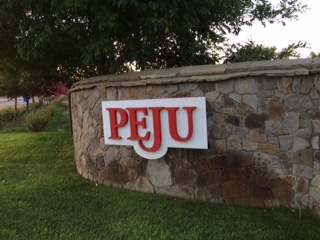