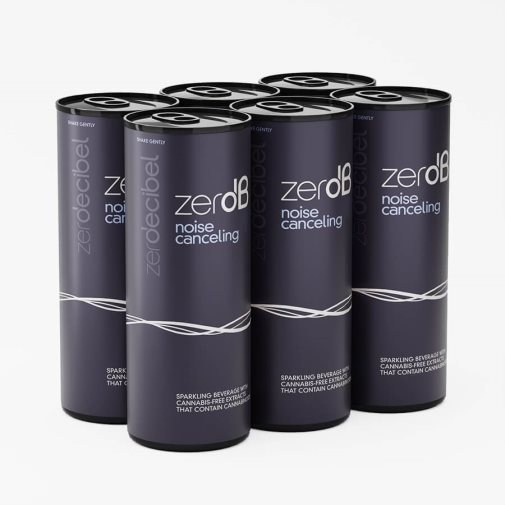 April 30, 2020, TORONTO – Powered by an organic, cannabis-free plant formulation, Zero dB Noise CancelingTM wellness beverage is designed to help consumers filter out everyday stressors and to quiet mental noise. The carbonated, low-calorie beverage is available in two varieties, original formula and, +energy. Consumers can order a 6-pack of 355ml cans for CAD 34.99 (USD 29.99) at drinkzerodb.com. Zero dB will be available for purchase at multiple national retailers later this year.

Founder and CEO Gary LeBlanc, shares, “When creating Zero dB, it was imperative that our product was based on hard science targeting actual benefits. Much of the anxiousness people experience today can be traced to the high volume of ‘noise’ we have in our minds due to our multi-tasked reality. People who have tried our beverages describe the benefit of feeling more focused, relaxed, and able to take on their next challenge. Whether it’s that critically important work presentation or even a golf game that requires a sharper edge, I like to describe our products as the world’s first noise-canceling beverages.”

It is expected that the global CBD market will soon be a multi-billion-dollar industry. This is largely based on evidence implying a role for CBD and cannabinoids in the management of anxiety, which has led to the promotion and marketing of many CBD-infused products.  While it is commonly believed that cannabinoids are only sourced through the cannabis plant, other plants, including echinacea, liverwort, helichrysum and licorice root all have naturally occurring cannabinoids. The breakthrough scientific research of NeuroTheryX Canada Ltd. (NTX), partner in the creation of Zero dB, has allowed for the identification and measurement of the activity of cannabinoids.

“The unique feature of Zero dB is that it is not derived from cannabis or hemp. Instead, Zero dB is made from well-known naturally occurring extracts that have been analyzed and formulated for optimal effectiveness, all without the known negative effects of concentrating single components, such as CBD,” says Dr. Armen Manoukian, CEO/CSO of NTX.

The first commercial application of this science, Zero dB’s proprietary formula resulted from a rigorous discovery and testing process that led to the most effective combination of cannabinoids sourced from non-cannabis plant extracts (with established histories in human consumption). The resulting cannabis-free beverages are believed to be safer and are superior to CBD in the NTX platform. By sourcing cannabinoids from non-cannabis plants, Zero dB is also not subject to the consumption and distribution restrictions associated with CBD and cannabis.

“We believe that being the first of its kind provides Zero dB a great market potential and acceptance. We’re also very excited by the positive reactions in our consumer trials,” comments Rick Fitzgerald, former Diageo Canada CEO, and chairman of Zero dB parent company Ikkuma Inc.

Headquartered in Toronto, Canada, Ikkuma Inc., the manufacturer and distributor of Zero dB, was founded in January 2019 by CEO Gary LeBlanc (B. Eng, MBA). Zero dB is a cannabis-free, carbonated wellness beverage powered by plant extracts that contain cannabinoids to help quiet mental noise. To ensure the utmost quality, our beverages are made with organic and non-GMO ingredients and were developed in partnership with NTX, based on over 20 years of research. With over 20 years of experience in operations and strategy, Gary LeBlanc has held roles ranging from Vice President Operations to Site Director for Tier 1 CPG companies.

NTX is a central nervous system (CNS) focused therapeutics company in Toronto, Canada, with a history of drug discovery and development of both pharmaceuticals and nutraceuticals. The discovery and development philosophy at NeuroTheryX centers on the “mechanism of action” of natural plant-based ingredients.  Nutraceutical products are identified and evaluated using genetic targets and phenotype-based models – emphasizing a biological approach. Using this proprietary platform, NTX has developed a method to study cannabinoids and endocannabinoids and their role in neuropsychiatric indications leading to the development of a proprietary system to identify, measure and assess the activity of these compounds for use as therapeutics.  NTX has developed a robust pipeline of innovative CNS therapeutics and, several are in development.