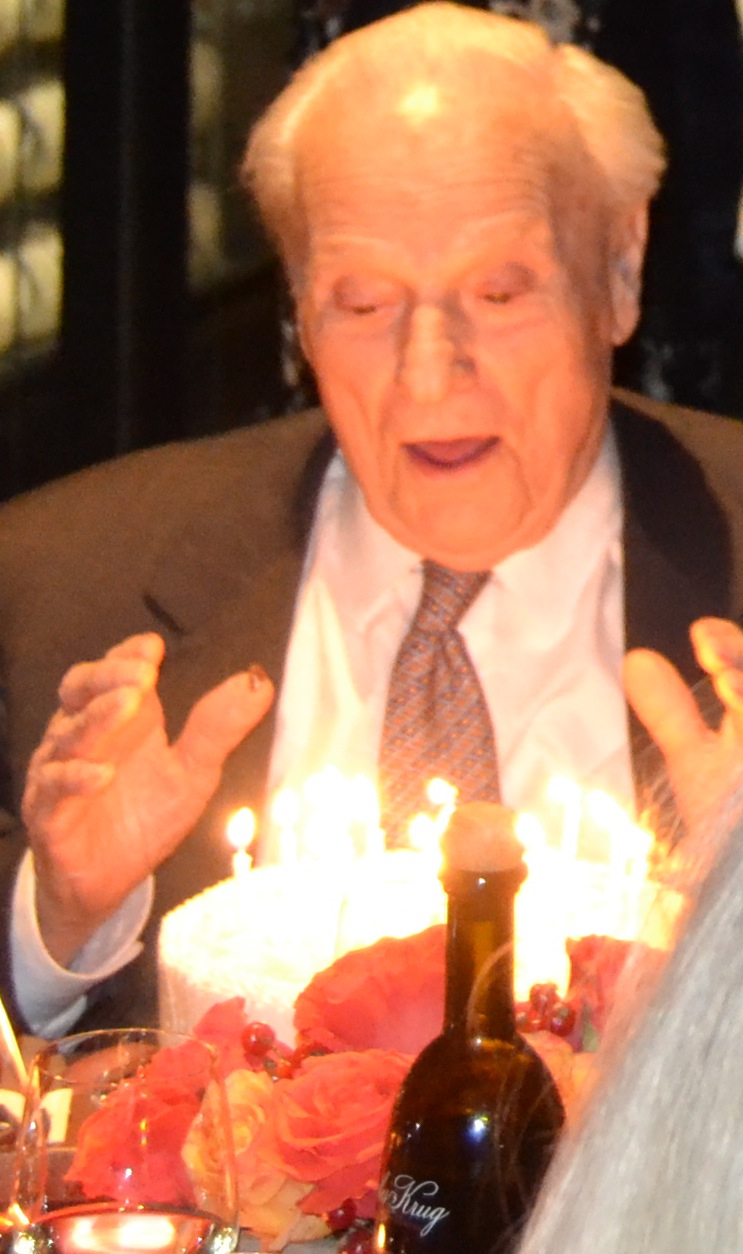 “Well, I’ll tell you, it’s the greatest thing to be here with all of you people,” Peter Mondavi Sr. said, shortly before he blew out the candles on Saturday night. “It’s a fun evening and we’re looking forward to a great future. I’ve been in this business for seventy years. I love the people and the ups and downs, and there’s more to be done. I’m happy to be part of it. Thank you for coming.”

Peter Mondavi Sr. turned 99 November 8, and last weekend three branches of the Mondavi family came together to celebrate not only his birthday but other milestones as well.

Peter Sr. was fully engaged and alert. Asked what keeps him so youthful, he replied, “ “Everything in moderation.”

“The secret to dad’s youthfulness, is not only a glass of wine every day, but his passion for the business,” Peter Mondavi Jr. later said. “He comes into work every day. He popped into my office this afternoon. So, when I say everyday, that’s seven days a week.”

Wine has been a Mondavi family business for four generations. Cesare Mondavi was an Italian immigrant who grew grapes in Lodi during Prohibition and established roots in Napa in 1943, purchasing Charles Krug winery.

Festivities started with a dinner at Continuum Estate on Pritchard Hill, celebrating the near completion of a new estate winery, the completion of a successful crush at the new winery and the 100th birthday of Robert Mondavi. The extended family then met up for a lunch the next day at Michael Mondavi’s Tuscan-style estate, prior to a gala dinner celebration for Peter Mondavi Sr. at Charles Krug a few hours later.

“Mike, thank you so much for selecting the wines we’re having now,” Tim Mondavi said. “The 74’, when we worked together – that’s a powerful symbol, as is the symbol of the 65’ with dad and Peter. Thank you for you generosity and sweetness in thinking that through and sharing it with all of us."

“I’m really thankful to be part of this family – and thank God we’ve done our own wines and gone our separate ways and we’ve come together to break bread together and to share what we’re doing,” Rob Mondavi said. “Because, as Marcia very eloquently said last night, we have gone our separate ways, but our heart, and passion and soul is still here in the land with the wines and in creating wine and sharing that with you.”

“Michael, Tim, Marcia, all the fourth generation: This is a very pivotal moment in our families,” Marc Mondavi said as lunch was winding down. “My dad and my uncle got into a beef. ... Anyway, they separated, and I still have people that think my dad and my uncle never patched it up. I simply tell them, ‘if they didn’t patch it up, why did they have dinner and lunch every month?’ Fortunately, they got back together. Michael, Tim, and Marcia: we were in the background for all of this and we always got along. We always did. It’s great that we’re all back together. My God, we’ve got 200,000 competitors in the world – and the three families, Tim, Marcia, Michael, and ours, my brother Peter, and myself. We need to compliment and help each other and drive our business forward as friendly, complimentary competitors. I’m very proud of bringing the family back together.” 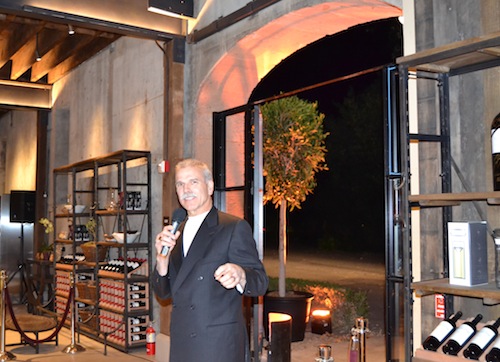 The partying that continued with birthday dinner for Peter Sr. coincided with the unveiling of a multi-million dollar renovation of the Redwood Cellar at Charles Krug Winery. The new hospitality center is housed in the original 1872 Redwood Cellar that was once a production space filled with redwood tanks.

Designed by Howard Backen of Backen, Gillam and Kroeger, (who also designed the Continuum winery) the renovation showcases the scale of the building while preserving the patina of time with steel beams, wooden posts and re-purposed raw redwood wall finishes with wood taken from the old production tanks. It’s incredible. One has to see it to fully appreciate it.

Architect John Taft recounted his first meeting with Peter Sr. to discuss the project and how Peter Sr. brought many pages of notes and sketches he’d been working on for the past twenty years prior to the transformation of the original building. 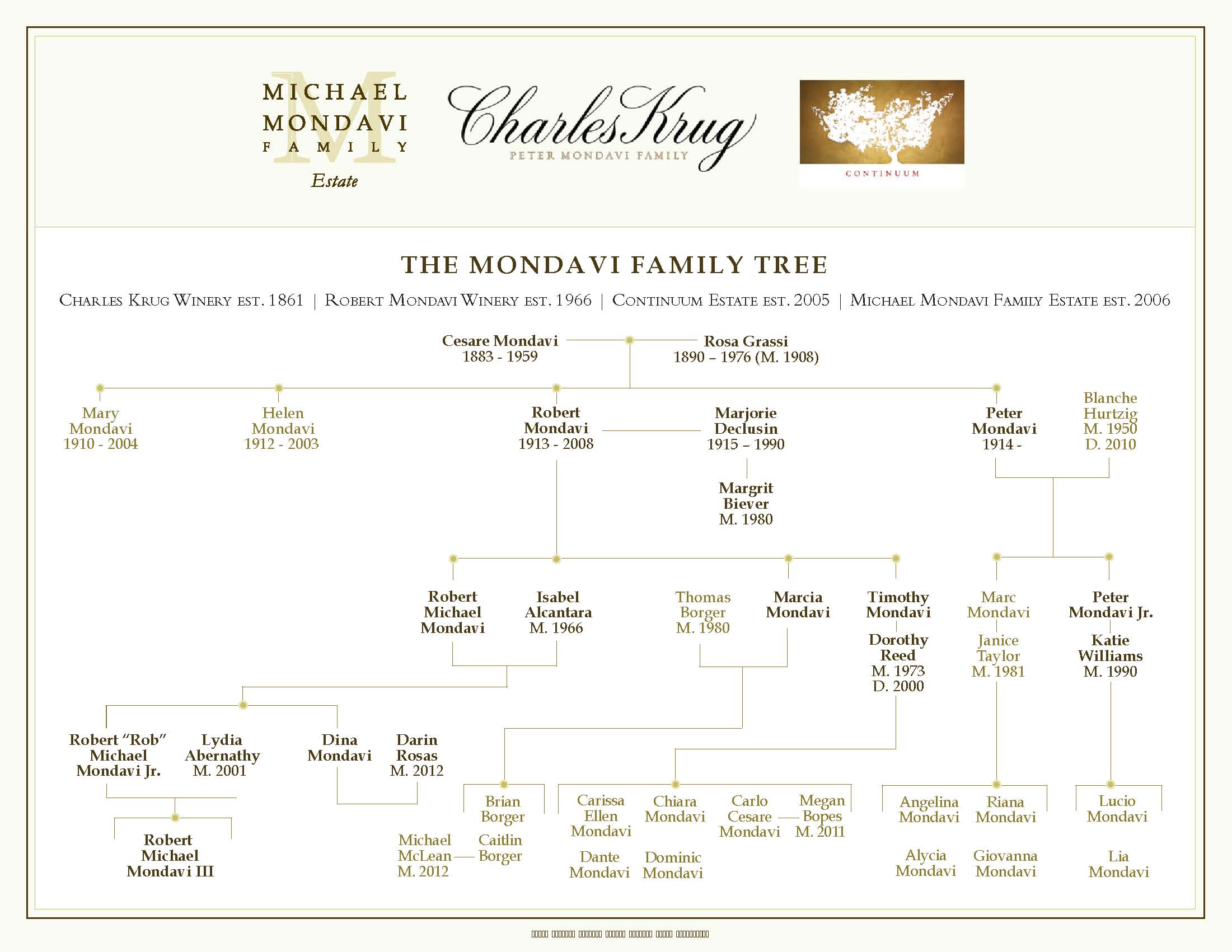 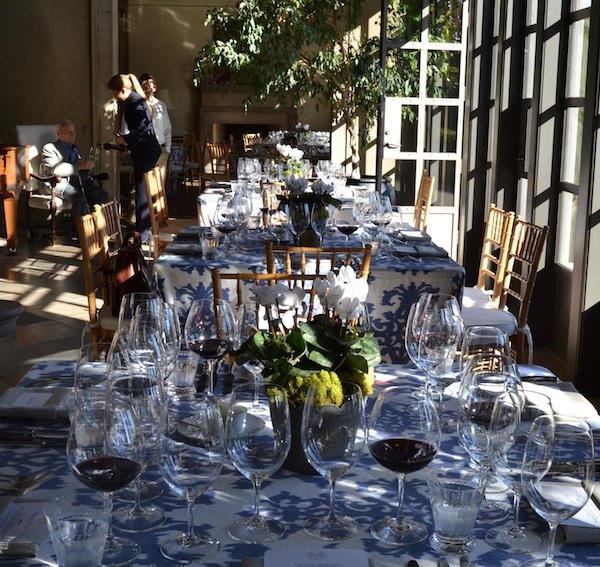