The Homepage for the Wine Industry

MY PROFILE
MY WINEJOBS
SUBSCRIPTIONS 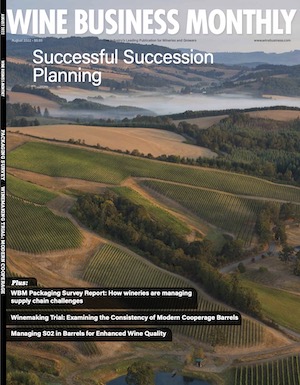 The Industry's Leading Publication for Wineries and Growers

The Industry's Leading Publication for Wineries and Growers

Hugh Tietjen (Chairman) has been involved in the wine business since 1971 as a grape grower and investor in wine related activities. Mr. Tietjen graduated from USC, majoring in market research and joined IBM. He later founded Computer Intelligence Corporation, a leading market research firm in the computer and communications industry. Mr. Tietjen serves on the boards of Monticello Vineyards and Wine Communications Group. He is a partner in the Rutherford Group as well as serving on the board of Wine Market Council and several information related market research companies.

Eric Jorgensen (President) joined Wine Communications Group (WCG) in 2000. Mr. Jorgensen has over 30 years of experience working in media, technology and telecom companies. Prior to joining WCG, he was Vice President and General Manager of Messaging and Community for Excite@Home, where he joined in the Company's infancy and remained through its IPO and merger. Before Excite, Mr. Jorgensen held management and finance positions at Apple Computer, Taligent (a joint venture between Apple and HP) and Pacific Telesis International. Mr. Jorgensen graduated from University of California, Berkeley with a BA in economics and holds a MBA from Wharton.

Lynne Skinner (VP - Data Management) joined Wine Communications Group in 2002 with ten years' experience in data management and modeling. In 2018, she was elected to the WCG board of directors. Ms. Skinner graduated from the University of Colorado, Leeds School of Business with a BS in finance.

Cyril Penn (Editor in Chief) has followed the U.S. wine industry as editor of Wine Business Monthly for nearly two decades. In that time, Wine Business Monthly has emerged as the leading provider of information to the wine industry in North America. Mr. Penn has explored wine regions throughout the world, is a frequent speaker at industry events, and is often quoted in the news media. He has more than three decades of wire service, magazine and broadcast experience. Mr. Penn started his career with Reuters in New York and later contributed to dozens of publications, specializing in energy, high technology and biotechnology. Prior to joining Wine Communications Group, Mr. Penn was managing editor of Home Energy Magazine, published in association with the Energy Resources Group at Lawrence Berkeley Laboratory and was managing editor of California Energy Markets in San Francisco. Mr. Penn holds a Bachelor's degree in media studies from Fordham University in New York.

Andrew Adams (Editor - Wine Analytics Report) joined Wine Communications Group in 2011 as staff writer for Wines & Vines and later become editor of the magazine in 2018. Prior to joining WCG, Mr. Adams worked in winemaking at a Napa Valley winery and was a reporter and editor at daily newspapers in Oregon and California for more than a decade. Mr. Adams holds a Bachelor's degree in journalism from the University of Oregon.

The Homepage for the Wine Industry