Grapevine leafroll associated virus 3 (GLaV-3) is, arguably, the No. 1 most economically important virus in grapevine production and is designated as an exclusion pest in most certification programs. However, growers are often frustrated to find this virus in their vineyards and in certified nursery stocks. Since GLRaV-3 is known to be genetically highly variable, we suspect that certain strains may have escaped detection during certification.

“Such genetic variability has significant implication in the detection of GLRaV-3 by molecular means and serological assays,” said Dr. Tefera Mekuria, plant virologist at Agri-Analysis. Advances in new testing methods are needed to help address this important issue. Funded by a USDA Small Business Innovative Research (SBIR) Grant, Agri-Analysis has recently developed a new ELISA-based reagent that provides broader coverage of GLRa-V3 variants than the commercial reagent currently in use by most State certification programs. Since fall of 2013, Agri-Analysis has identified a number of GLRaV-3 positive samples from vineyards in Napa and Sonoma that were tested negative using the current commercial reagent (BIOREBA). Figure 1 is a set of data comparing the testing results of ten samples. One sample was tested positive for GLRaV-3 by both methods (left). Seven samples were first tested in December 2013 using cane samples (AA1, green) and recently re-tested in spring of 2014 using petiole samples (AA2, light green). These seven samples were tested positive for GLRaV-3 only by Agri-Analysis reagent but not by the Bioreba reagent. Two control samples were tested negative for GLRaV-3 by both methods (right). The new reagent should have implications in State certification programs because most certification programs use the Bioreba reagent which we believe may have let certain variants of GLRaV-3 escape detection. 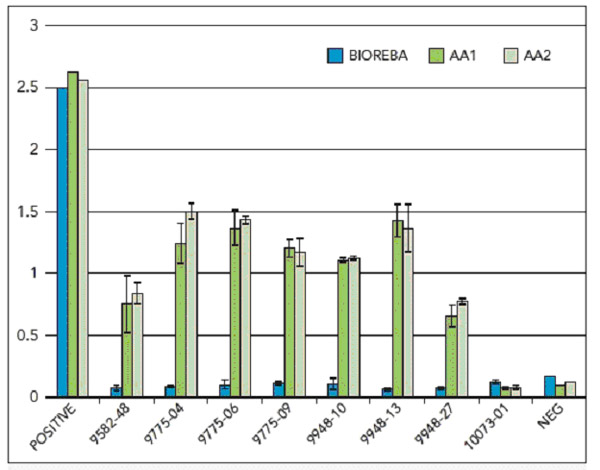 Figure 1. The comparson of testing results of ten samples for GLRaV-3 by Bioreba and Agri-Analysis reagents. The majority of GLRaV-3 positive samples were tested positive by both methods. One such sample is labeled as "positive" on the left. Seven field samples were tested negative for GLRaV-3 when using the BIOREBA reagent (blue), but consistently tested positive by the new detection reagent developed by Agri-Analysis. AA1 represents the result of testing cane materials in fall of 2013 (green). AA2 represents the result of testing petioles from the same plants in spring of 2014 (light green). Two negative control samples were tested negative by both methods (right). These results were presented at the national meeting of American Phytopathological Society held in August 9-13, 2014 in Minneapolis, MN.

Could some strains of GLRaV-3 have escaped detection during certification? Dr. Monica Cooper, Napa County farm advisor, UC Cooperative Extension, has been studying the epidemiology of GLRaV-3 for a number of years. When asked for her opinion why the GLRaV-3 virus is found in certified materials, Dr. Cooper commented that “detection reagents could be one explanation. In 2010, I did work with a grower who had LR3(+) vines with clear symptoms that consistently tested negative.” Later, the research laboratory of Dr. Rodrigo Almeida at UC Berkeley was able to isolate a novel variant of LR3 from the samples. “Anything we can do to improve the reagents will certainly make it easier to clean up our vineyards and nursery material over the long-term. I hope that the certification programs in California and other states are keeping updated on their virus testing methods and protocols.” said Dr. Cooper. (Reference: "Red Blotch Disease and the Virus Status of CDFA Certified Nursery Stocks", by Stamp and Wei, Wine Business Monthly, August, 2014 https://www.napagrowers.org/in-the-vineyard/pests-disease/red-blotch/).

Grapevine leafroll associated virus 3 is a filamentous single stranded RNA virus of 1,800 to 2,000 nm in length and 12 nm in diameter (see Figure 2 below). In an economic impact study by researchers from UCD, the infection rate by GLRaV-3 was estimated to be about 30 percent in Napa/Sonoma vineyards, and the annual loss to growers was about $88 million (http://vinecon.ucdavis.edu/publications/cwe1306.pdf). In a separate economic impact study by Cornell researchers, the estimated economic impact of grapevine leafroll diseases (GLRD) ranged from approximately $25,000 for a 30 percent yield reduction and no grape quality penalty to $40,000 per hectare for a 50 percent yield reduction and a 10 percent penalty for poor fruit quality in the absence of any control measure. The per hectare impact of GLRD can be substantially reduced to $3,000–$23,000 through roguing if the level of disease prevalence is moderate (1–25 percent). (http://ajevonline.org/content/63/1/73.full.pdf) 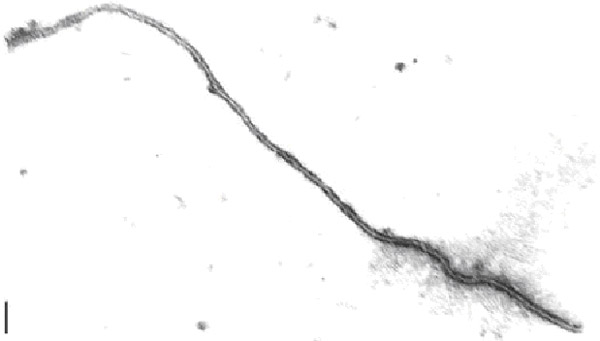