The harvest season has begun for St. Julian Winery in Paw Paw – and this year, that harvest is a little sweeter for Nancie Corum, who has just been promoted to head winemaker after nine seasons with Michigan’s oldest and longest-operating winery. Corum steps into the shoes of Dr. David Miller, who served 13 years as a winemaker at St. Julian. Earlier this summer, Miller stepped out on his own to open his own winery in Southwest Michigan.

As head winemaker, her responsibilities include managing all aspects of harvest, overseeing day-to-day activity in the wine cellar, development and implementation of the sensory evaluation program for St. Julian’s wholesalers and trade accounts, managing juice and wine sales to more than 250 bulk customer accounts, representing grocery-chain private-label accounts and serving as a judge in several international wine competitions each year.

Corum, the first professional commercial female winemaker in Michigan, just graduated from Purdue University-Indiana University in West Lafayette, IN, with a Master of Science degree in Food and Agribusiness Management. In November, she will complete the MBA portion of her degree. The program awards a master of science in 21 months from the college of agriculture and an MBA from Indiana University’s Kelley School of Business. Aside from the five one-week residence sessions, Corum completed her courses online, allowing her to maintain her full-time position on the winemaking team at St. Julian.

Purdue’s long-standing strengths in agribusiness and food science, coupled with Indiana University’s expertise in management education, delivers the best of both worlds – an industry-specific focus on current issues and food and agriculture, paired with a general MBA. Both schools have international reputations and are highly regarded for their quality programs.

Corum was born in Bloomington, IL but grew up in Lafayette, IN, graduating from Purdue University in 2002 with a Bachelor of Science in Food Manufacturing Operations and double minors in Agribusiness Management and Organizational Leadership & Supervision. While at Purdue, Nancie was a member of several organizations, including Kappa Alpha Theta, Institute of Food Technologists and the American Wine Society.

During the course of her undergraduate studies, Corum assisted enologist Dr. Richard Vine in making wine as a part of Purdue’s grape and wine research program, as well as assisting in the coordination of the esteemed Indy International Wine Competition. She completed an internship at Geyser Peak Winery in California, under the tutelage of winemaker Daryl Groom. Although the experience of working in the famed Sonoma County provided great opportunities, Corum was passionate about getting back to the Midwest to join the growing wine industry here.

In August 2002, Corum joined St. Julian as a lab manager and enologist. Her contributions over the years have included making continued improvements to the winery’s Quality Assurance and Quality Control lab. She was promoted to Assistant Winemaker in May 2003 and to Associate Winemaker in August 2008.

In her free time, when she is not swirling wine, Corum enjoys boating, wakeboarding, cooking, spending time with her family and friends, and planning a January 1, 2011 wedding!

The family-owned St. Julian winery, Michigan’s oldest and longest-operating winery, was founded in 1921. It is one of 12 wineries to make up the Lake Michigan Shore Appellation – a designated American Viticultural Area (AVA) and is part of the Southwest Michigan Wine Trail. In 2011, St. Julian will proudly celebrate its 90th Anniversary. 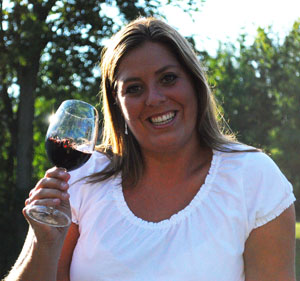