SCWC annually presents the Viticulture Award of Excellence to recognize individuals or families who have made significant contributions to SCWC, to Sonoma County viticulture, and the greater wine and local communities.

Opatz began his work with Silverado Premium Properties/Vino Farms (SSP) in 2004. His responsibilities include: winery relations and grape sales, supervision of pest, fertility and water management for the Sonoma and Napa properties. From 2007 to present, Opatz has expanded his range of responsibilities to include acquisition activities, new vineyard design and viticultural oversight for all of SPP’s properties along the coast of California between Santa Barbara and Sonoma County.

His background includes: from 1998-2003, Vice President of Vineyards and Grower Relations for Allied Domecq which included projects for the company’s international brands in Argentina and Spain; Vineyard Manager at Alexander Valley Vineyards from 1993-1998; Director of Vineyard Operations and Grower Relations at Chateau St. Jean from 1986-1993; and Project Supervisor at Gallo Sonoma from 1981-1986.

Opatz, 55, began his career at a very young age at his family’s ranch in the Napa Valley, now known as Sequoia Grove Winery. He spent his free time behind the wheel of a tractor both at home and for neighboring families in Oakville. In 1973, at age 17, he was living on his own while serving an apprenticeship under William Bartolucci, a third generation grower. For the next several years, he worked for other wine producers including Round Hill and Spottswoode in the Napa Valley.

In the winter of 1979, Opatz was bit by the gold bug and pursued his only adventure outside of grape growing that led him to the Trinity River. There he mined gold in the deep river channel sections of the Trinity west of Weaverville. It took only a year for Opatz to find himself back in Wine Country settled into the career he loved, growing grapes and developing vineyards for Gallo Sonoma.

“Sonoma has been good to me and my family, being part of the winegrowing community here and giving back has always felt like the right thing to do,” says Opatz.

While at Chateau St. Jean, Opatz was very involved with crafting the Sonoma County farm worker housing ordinance. Under his direction, Chateau St. Jean built the first new 38-man housing facility in 18 years. This ordinance helped set the standards for other areas in California and around the country.

In 2003, he and his wife Lorna, bonded their wine brand “Route 128 Winery.” Opatz makes wine at home on the weekends at the family vineyard and Lorna sells their tiny production of 450 cases annually in their tasting room in Geyserville. He believes this is the final frontier of his craft, taking winegrowing to its natural endpoint. “Some guys pursue cooking, I wanted to close the loop on what I have spent a lifetime doing, and that’s being a grape grower.” 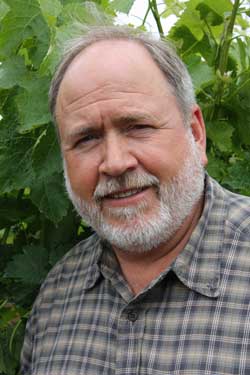