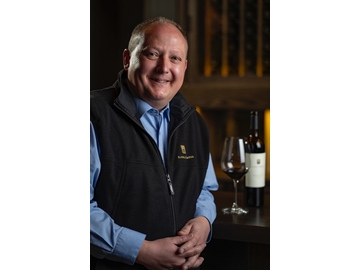 In 2010, Poulsen founded his own label, which is produced at Alpha Omega, and a wine consulting business. He departed Alpha Omega in 2013 for Acumen Wines, reuniting him with Denis Malbec, Acumen’s founding winemaker and Alpha Omega’s former consulting winemaker. Poulsen was selected as Director of Winemaking and Executive Manager at Acumen.

Through the years, Poulsen has remained close to Hoefliger and the Alpha Omega family.

“I have always considered Alpha Omega my second home,” Poulsen said, “When the amazing reunion opportunity presented itself, I did not hesitate. At Alpha Omega, I was privileged to work with some of the most highly-acclaimed vineyards and fruit sources in Napa Valley, which must be any winemaker's dream. I'm very excited to be a part of this once again."

Hoefliger said, “Henrik is a man of honor, heart and trust that I am proud to count as my friend. I cannot wait to resume our collaboration of making great wines together. He intimately knows our vineyards and production facilities; plus, a lot of the Alpha Omega team he previously worked with is still here.”

Alpha Omega will continue to use master blender Michel Rolland, who has consulted for the winery since the first vintage and collaborated with Poulsen and Hoefliger at Newton, for final blends of its red wines. Hoefliger’s move to consulting winemaker for Alpha Omega matches the role that he already held for the other two brands under the Alpha Omega Collective, Tolosa in San Luis Obispo, California’s Edna Valley and Perinet in Spain’s Priorat.

“Our original family is back together again. I couldn’t be more pleased,” Robin Baggett said. “We are excited to have Henrik back as part of the Alpha Omega family. Henrik and Jean’s synergy as a winemaking team is evident in the highly-regarded handcrafted wines they have created together.”

A native of Denmark, Poulsen arrived in Napa Valley in 2000 after working at Château de Haux in Bordeaux and meeting Newton Vineyard Founder Su Hua Newton in Paris. At Newton, Poulsen enhanced his winemaking knowledge working alongside the esteemed Luc Morlet and then the soon-to-be discovered Hoefliger.