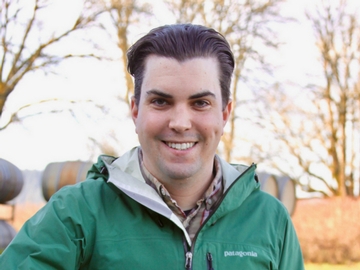 Montinore Estate, the country's largest producer of certified estate wines made from Biodynamic® grapes, has appointed Benjamin Eyer as Assistant Winemaker. Eyer earned his undergraduate degree at Allegheny College, majoring in both Chemistry and Spanish, before earning a graduate degree in Organic Chemistry at the University of Pittsburgh. While interning at various wineries across the West Coast, Eyer completed a Winemaking Certificate at the University of California-Davis. Having honed his winemaking skills in Chile, California and now Oregon, Benjamin has diverse experience in nearly every aspect of the craft.

Prior to Montinore Estate, Eyer worked as Cellar Hand for Rex Hill and A to Z Wineworks, where he was eventually promoted to Cellar Hand – Bottling Liaison. After about three years at Rex Hill Vineyards and A to Z Wineworks, Eyer began at Montinore Estate as the winery’s Production Coordinator. In his promoted role as Assistant Winemaker, Ben’s expanded responsibilities include laboratory quality control, winery database management and work order logistics, along with a greater role in tasting, final blending decisions and bottling management.