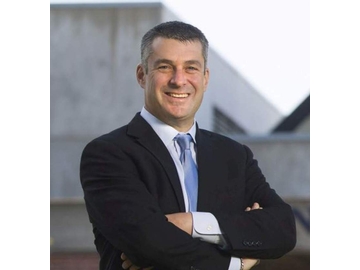 Silver led the business program during a decadelong period of growth, increasing student enrollment by about 40 percent, raising $20 million in donations and scholarships and carving a name for the school as one of the few programs focusing on the business and entrepreneurial aspects of the wine industry.

Silver’s move to the cannabis sector — particularly to a high-profile company like CannaCraft, which was thrust into the public eye in 2016 when police raided its manufacturing operation — comes as cannabis companies are proliferating in Sonoma County.

Silver said CannaCraft’s revenues have doubled every year for three years and he hopes to help the company continue growing, with an eye toward replicating the CannaCraft brand in other cannabis-friendly states. He also will seek to further its mission to be a responsible corporate player in Sonoma County’s economy.

“It’s time to rip apart false stigmas and look at the facts about how the industry contributes to our communities and what the plant can do,” Silver said.

Silver made his first appearance as CEO of CannaCraft at an all-staff meeting Tuesday. Headquartered on Corporate Center Parkway in west Santa Rosa, the company employs about 180 people and has about 140 products under five brands, including AbsoluteXtracts cannabis oils, Care By Design medicines and Satori chocolates. CannaCraft has three state licenses for its medical cannabis manufacturing operations, distribution company and its retail dispensary in Hopland, Emerald Pharms.

CannaCraft founders Dennis Hunter and Ned Fussell said they asked Silver to join the company after learning in mid-December he was leaving Sonoma State. Hunter said they got to know Silver after seeking his advice on CannaCraft’s corporate structure and executive team. Bringing Silver in to run the company will enable them to focus on innovation, Hunter with manufacturing and Fussell in cultivation.

“We’ve known this company has outgrown us, and we want Bill to take us to the next level,” Fussell said.

Silver had planned to take a year off and then return to the university as a professor of leadership and management. The CannaCraft offer was too interesting to refuse, he said. He still plans to teach.

Lisa Vollendorf, Sonoma State University provost and executive vice president of academic affairs, said Silver “brought a spirit of entrepreneurship and innovation to the school and the university.”

She said his work is best illustrated by the newly minted $9.2 million Wine Spectator Learning Center, a new home for the Wine Business Institute he helped shape. The center is expected to open its doors in May.

Over the last year, Silver has advised SSU as it developed a series of seminars focused on the cannabis industry launched by the School of Extended and International Education.

“With regard to the cannabis industry, certainly Bill Silver has helped us stay abreast of the changing economy in the region and that’s something we are proud of and he should be proud of,” Vollendorf said.

Silver came to Sonoma State in 2008 after serving as senior associate dean of the University of Denver’s Daniels College of Business, where he had held various positions since 1999.

He earned a bachelor’s degree in psychology at the University of Michigan in Ann Arbor in the 1980s, a city early to reduce penalties for marijuana possession, he said. That was his informal introduction to cannabis, but since then he learned about its potential health benefits when cancer struck multiple family members, including his mother-in-law, mother, best friend and one of his children.

But his true interest is the evolution of the sector, a once-clandestine backwoods business now emerging as a complex industry that could rival the wine industry in prominence on the North Coast.

But the company soon resumed operations and was among the first in the city to receive a license to do the type of manufacturing police were concerned about.

The case is not yet resolved, Hunter’s attorney, Chris Andrian, said Tuesday. Hunter is working with the Sonoma County District Attorney’s office on a civil settlement related to several building code issues on site at the time, he said.

Silver said he was aware of the issue and believed it to be a thing of the past. Today, the industry is taking off, armed with legalization and new regulations allowing its operations. California’s recreational marijuana marketplace launched Jan. 1.

“I think Sonoma County will be the business headquarters for cannabis, not only in California but also nationally,” Silver said.

Darius Anderson, a managing partner of Sonoma Media Investments, which owns The Press Democrat, is a registered lobbyist for CannaCraft.