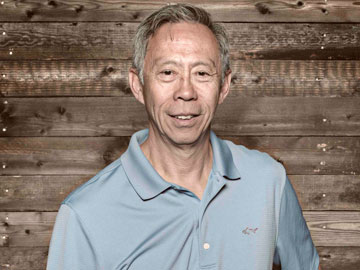 CAWSTON, BC – SEPTEMBER 25, 2017: Vanessa Vineyard is proud to announce the appointment of legendary Master Winemaker Howard Soon. A pioneer in the BC wine industry, he has been awarded with innumerable accolades and established many firsts in the province, including the first to release a series of single vineyard designated wines.

“I’ve worked with Vanessa Vineyard grapes since its founding, and believe it is unlike any other vineyard due to the site's unique topography, climatic conditions, and soil types – the perfect combination for making truly distinctive wine. When we first started getting fruit from Vanessa for Sandhill Wines it was very early days for attempting premium vinifera in the Similkameen. We however saw the potential, and when I tried our first vintage of Cabernet Franc I was blown away. It was the beginning of great wine coming from the Similkameen,” said Howard Soon, Master Winemaker. “I’m excited to go back to the workbench, it will be refreshing to be hands-on with these small productions. I believe this special terroir is the best site for growing premium reds in Canada.”

Vanessa Vineyard is situated high on a hillside overlooking the Similkameen Valley with red grapes cultivated on sloping terrain. The vines grow in rows of rock, absorbing the day heat and imparting that warmth during the cooler nights, thus bestowing complex flavours and minerality that are truly distinctive. A burgeoning appellation, the Similkameen Valley is touted as “the next great Canadian wine region.”

Viticulturist Robert Goltz comments, “I’ve been planting vines in the Okanagan for over 40 years and in the Similkameen since the NAFTA grape pullout. When we first began planting Vanessa, at that time, no one had quality grapes yet in the Similkameen. From the start we recognized the Vanessa site was ideal for premium reds, there is just so much sun exposure in the summer and the rocks were both a huge problem and an advantage.”

“Over the past decade we’ve worked closely with Howard. He helps growers and everyone else excel at their craft in the expertise he provides. He is unique among winemakers in giving us such incredibly detailed feedback on exactly what he’s looking for on the palate so that we can make changes in the vineyard to meet the precise flavour profile he’s trying to achieve in the fruit. Now that he’s with Vanessa, he will have even more freedom to continue this,” Goltz said.

“We aspire to produce the best red wines in the country and are proud to have a winemaker of Soon’s expertise on our journey. With this premier site and an extraordinary winemaking and viticulture team, we can craft profound wines that reflect this truly distinctive vineyard,” said Suki Sekhon, co-founder Vanessa Vineyard.

A living legend, for over three decades Howard Soon has been on the leading edge of winemaking innovation. Originally a brewmaster, a taste for more creativity saw him join the fledgling BC wine industry in 1980. Amongst numerous other milestones, Howard was the first winemaker in the province to receive a Gold Medal at the Chardonnay du Monde in France; release a series of single vineyard designated wines; and sweep the Canadian Wine Awards receiving Red Wine of the Year, White Wine of the Year and Winery of the Year -- the only winery to ever win all three. Most recently, Soon was recognized at the 2015 Vancouver International Wine Festival Celebrating Excellence Awards with the highly coveted Spirited Industry Professional. His collaborative  relationships with growers led him to Vanessa Vineyard in 2006, where working with their viticulture team, he oversaw the planting of their vineyard. He subsequently purchased the vast majority of their grapes for his highly acclaimed Sandhill Vanessa Vineyard wines. In 2017 Howard “retired” after 37 years with one of Canada’s largest wine companies to focus on truly small lot winemaking as Master Winemaker for Vanessa Vineyard.

Carved from stone, fuelled by sun, a vineyard like no other. Vanessa Vineyard, comprising 75 acres of extremely rocky terrain, is situated on a hillside overlooking the Similkameen Valley. Planted in 2006 under the guidance of renowned viticulturists Robert Goltz and Richard Cleave, the quantity of rocks on the site initially made vineyard development exceedingly challenging. The rocks, however, are a key asset to the property’s unique terroir, allowing day heat to be harnessed and imparted throughout the cooler nights enabling the fruit to produce flavours and minerality that are truly distinctive. In 2012 the owners Suki Sekhon and John Welson transitioned from grape growers to vintners. After ensuring the fruit was of superior quality, they began crafting small quantities of fine red wine. www.vanessavineyard.com