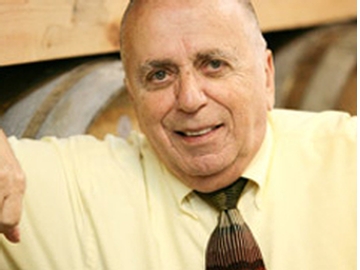 Riverhead, NY (August 19, 2014) - The Long Island wine community is mourning the passing of a regional pioneer and one of the industry's true icons. Dr. Herodotus "Dan" Damianos, founder of Pindar and Duck Walk Vineyards, passed away on Monday at the age of 83 after a long illness.

Dr. Damianos purchased 36 acres of land on the North Fork in 1979 and planted his first Chardonnay vines in 1980. Together with Duck Walk Vineyards which he acquired in 1994, his acreage would grow to some 600 acres, of which over 500 are planted with 17 different varieties of grapes. With between 50,000 and 60,000 cases of wine produced annually, Pindar is the largest winery on Long Island. His wines were among the earliest to penetrate the New York City market, and received numerous awards and accolades. In 1988, Pindar wines were served at the inauguration of President George H.W. Bush.

Dr. Dan, as was he known by friends and colleagues, became a very important figure in the wine world, not just on Long Island where he was always active in the Wine Council's leadership, but in New York as a long-time board member of the New York Wine & Grape Foundation, and nationally, as a member of the WineAmerica board. Recognizing his considerable contribution to the development of New York's wine industry, Dr. Damianos was the first and one of only two Long Island recipients of the Foundation's Unity Award. Established in 1990, the Award celebrates "individuals who have volunteered their time, shown exceptional leadership, and achieved recognized results in building industry co-operation and unity."

The sense of loss will extend well beyond the wine community. The size and scale of his wine operations meant that Pindar and Duck Walk became important forces in the local economy, accounting for hundreds of jobs and thousands of tourists to the North Fork every year. Dr. Damianos was a constant and very personable presence at his wineries and in the community. He delighted in engaging with people generally and easily charmed customers, local residents and the many dignitaries he came into contact with during his 35 years in the wine industry. He was also an active and very generous supporter of many local causes and charities.

Members of the Long Island wine industry, together with the many others touched by Dr. Dan, are deeply saddened by this tremendous loss the region, and join in sending our heartfelt condolences to the entire Damianos family.