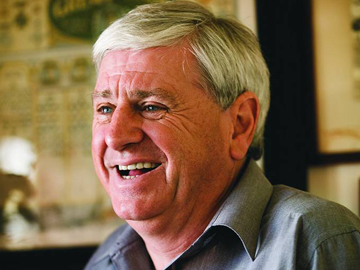 The Barossa, Australia (June 30, 2014) Doug Lehmann, deputy chairman of Peter Lehmann Wines, past managing director, and son of founder Peter Lehmann, passed away over the weekend following an apparent heart attack at his Barossa home. He was 62.

A sixth generation Barossan, Doug embraced all facets of winemaking and wine business from his father before forging a successful career of his own.

Following his retirement in July 2010, Doug maintained an active role with Peter Lehmann Wines as non-executive deputy chairman, working closely with his successor, CEO Jeff Bond, on the future direction of the winery.

“Doug was a team man, and always said it was people that make great wines. With that, he always led by example,” Bond said. “He upheld the legacy of his father, which remains in every aspect of the company today, and will continue to.”

Away from the wine industry Doug was a passionate car enthusiast and fundraiser. He was Chairman of the children’s charity Variety Bash since 2011. As a participant of the Bash over the past 25 years, Doug was consistently in the Top 10 fundraisers; and over his four year tenure as Chairman, more than $5 million was raised.

Doug Lehmann is survived by Ingrid, his wife of 40 years, sons Michael and Harry, and daughter Annika.